Wingnuts' sad dream to be cool: Why they worship Reagan and the military

From seeing Ted Nugent as a counterculture hero to their love of the Gipper, here's what drives the wannabe rebels 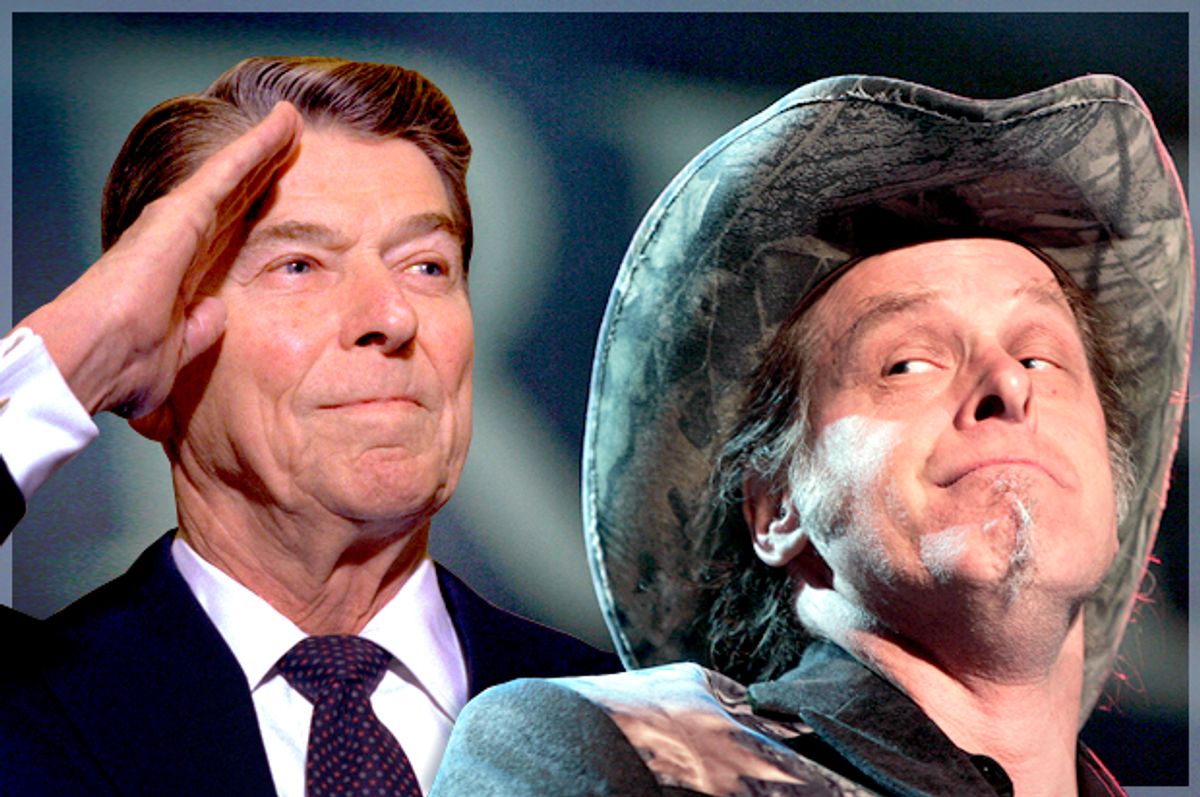 One of the most poignant characteristics of the conservative movement is the extent to which they deeply yearn to be cool and yet are inescapably uncool on the most fundamental level. From their "conservative Woodstock" obsession to their sad attachment to Ted Nugent, the rare remnant of '60s rock 'n' roll who will have anything to do with them, they continue to insist that they are the true counterculture, the real rebels with a real cause. It's just sad. With age should come wisdom, but unfortunately Republicans are still living with their faces pressed against the glass, wistfully yearning to join the party.

Which brings me to Craig Shirley, Reagan chronicler and GOP hit man, lately in the news for accusing noted historian (and, full disclosure, a personal friend who acknowledged me in his book) Rick Perlstein of plagiarism for having the temerity to credit Shirley's Reagan work in his new book about the 1970s, "The Invisible Bridge." Dave Dayen did a great job of debunking the silly charges against Perlstein here in Salon. And Adele Stan does an epic takedown of the midlevel GOP functionary Craig Shirley here. She writes:

[L]et’s examine what Craig Shirley does in his day job at his public relations firm, Shirley & Banister, and why he says he does it, here from an interview with the Washington Post’s Krissah Thompson:

“Everything we do is designed to move numbers, shape opinion, advance legislation, put people on book bestseller lists, stop legislation, whatever,” says Shirley, sitting next to Banister in the firm’s conference room. “It’s all designed to advance some type of philosophical goal.”

In the case of smearing Perlstein, that philosophical goal would appear be for control of the Reagan narrative that Shirley himself has sought to shape in his two biographies. The narrative, of course, is that of Reagan as noble revolutionary, a narrative threatened by the Perlstein book, which sets the right’s idol in the context of the tumult of his times, noting his role as an apologist for Watergate and reviser of the outcome of the Vietnam War as a win for America. In Perlstein’s telling, Reagan is less the noble revolutionary than the canny beneficiary of a clueless political establishment and a nation in longing for a denialist reinventor of its recent history.

One might wonder why Perlstein is suddenly in the cross hairs of the conservative movement after having already written two epic histories of the modern conservative movement and being generally lauded by the right as a "fair and balanced" historian. Dave Weigel got it right in this piece about the book: It's one thing to write about a minor saint like Goldwater and a martyr like Nixon -- this time he took on God himself. And that will not stand. There has been a lot of time and money expended over the years to deify President Reagan. They are not going to let a beautifully researched, highly nuanced account of his rise to power be anything but the political equivalent of the Ascension itself. Perlstein shows him to be a highly ambitious politician who used America's long-standing  fetish for the leitmotif of American innocence to cynically deepen and leverage the cultural fissures that have always been present in American society. That's not the Reagan-God the Reagan worshipers want anyone to see.

Now, there are various Reagan worship cults out there. There's the towering Commander in Chief who single-handedly saved the world from communism. And there is the Great Communicator who was able to persuade everyone in the nation that conservative philosophy was the only thing that could bring us out of the dark ages of New Deal liberalism and the Great Society. But it's fair to guess that most people are unaware of Reagan the hippie frat boy. (Indeed, one might ask how the man who famously defined a hippie as someone who “looks like Tarzan, walks like Jane, and smells like Cheetah” could possibly be a member of the counterculture.) And yet it apparently exists, and none other than the noted Reagan biographer Craig Shirley subscribes to its tenets.

How else to explain his unorthodox belief that the battle for the conservative soul can best be explained as analogous to the subversive comedy classic "Animal House" -- with the Republican establishment in the role of the uptight authoritarian Omegas and Reagan's conservative movement the freewheeling miscreants of the Delta House. He really wrote this:

Can anyone who knew or understood Ronald Reagan see him in the Omega House?

Delta House was based on individuality and freedom, challenging the established order: the essential elements of American conservatism. Wasn't it Otter who made an impassioned defense of freedom and patriotism?

Omega was autocratic and establishmentarian, with a false projection of Utopianism. Barack Obama, Bill Clinton and the Bushes would have fit right in. They knew the rules did not apply to them, but they applied to everyone else. Power flowed downward. Same with Mitt Romney. He looked at conservatives like they were only there to pick up his dirty tennis shorts. No wonder many conservatives saw the election of 2012 as a choice between Tweedledee and Tweedledumb.

Now, this is not a hard and fast rule, but it is a pretty good guideline. Yes, I know some will say "what about the religious right?" But, as any of us sinners knows, the church isn't just for saints. The religious right guys and gals would have been with us, if only to save us from ourselves. Or they would have been "independents," coming to our parties on Saturday, in their pews on Sunday. Guilty pleasure? You bet. This is also the fusionism of the "Social Right" and the "Sociable Right," which conservative theoretician Frank Meyer and others constructed as the basis for American conservatism in the 1950's...

This is the man who's challenging Rick Perlstein's account of Ronald Reagan. A man who called his wife "mommy"-- herself a woman who told us all to "Just say no." (And how desperate are these people to banish George W. Bush from their pantheon; if there's one Republican who probably would have been a Delta, it was him -- Bluto, no doubt.)

There are many stretches of the imagination in Wingnuttia, but this one requires a mental elasticity that only full-blown, brainwashed cultists could possibly wrap their minds around. Or a person who so desperately wants to be cool that he'll delude himself into believing that the movement that fetishizes the military to the point of embarrassment is anti-authoritarian, that a movement that constantly repeats a mantra about American exceptionalism (calling the U.S. a "city on a hill") is not Utopian, a movement that has been dedicated from day one to the destruction of unions, preserving the prerogatives of the 1 percent and demonizing racial and ethnic minorities doesn't "look down" on others. (And any poor sad sap who has persuaded himself that the religious right is really a "live and let live" movement of tolerant partyers may be too far gone to be deprogrammed.)

They are really more to be pitied than censured. It must have been so difficult to grow up being them. But really, trying to make Ronald Reagan and other conservative movement luminaries into fun-loving counterculture radicals is just desperate and depressing. They are reactionaries, upset at all modern challenges to their prerogatives, fighting tooth and nail against any change that threatens their precarious hold on social dominance. They are very good at what they do. And they have been very successful on a political level even if the culture has mostly passed them by. But whatever their other achievements, they will never, ever be cool. Ever. They are Omega House, every last one of them.