Amidst a heated night of protests, Fox's Steve Harrigan learned some important lessons 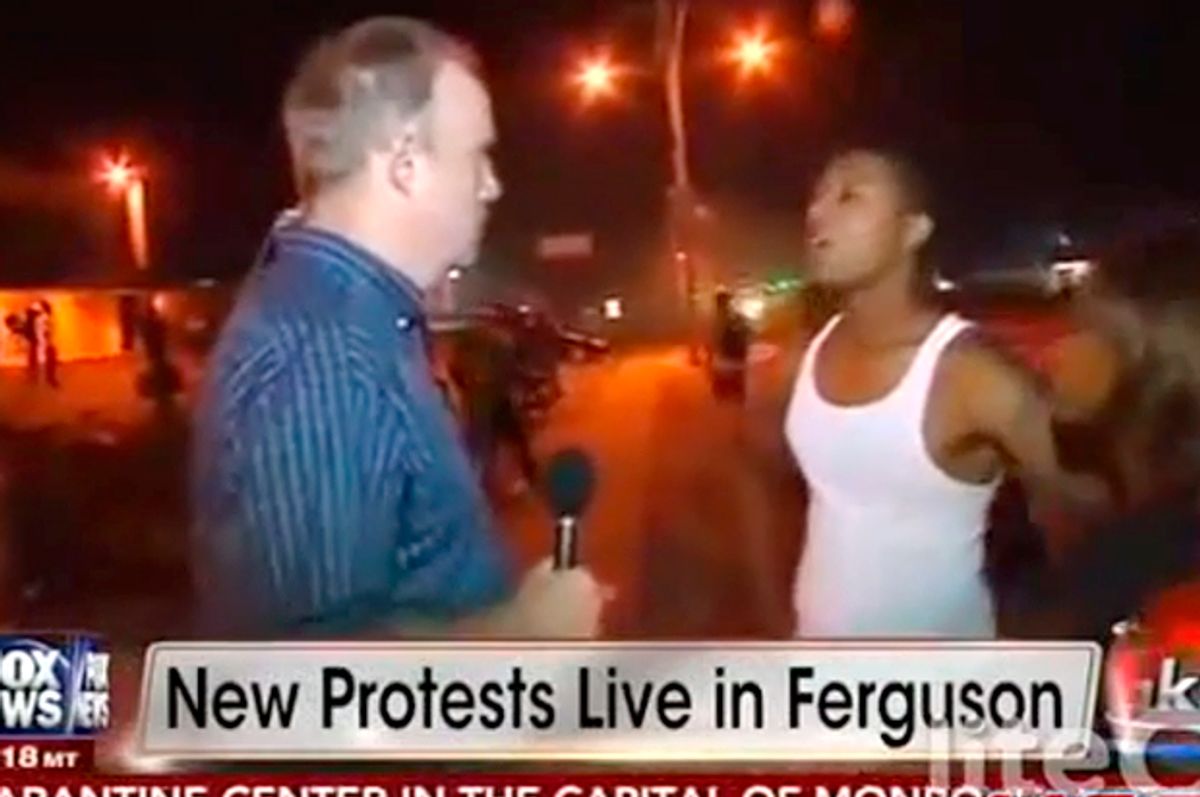 Last night, this gem of a video surfaced amidst the sea of news coverage of the protests in Ferguson, Missouri. Nine days ago, Michael Brown, a young, black teenager was gunned down by a white Ferguson police officer, Darren Wilson, a tragedy that has garnered national media attention and attracted hundreds of media outlets -- on the left, right, and "center" -- to the small St. Louis County suburb. Of the numerous outlets documenting the night's happenings, Fox News sent reporter Steve Harrigan to "investigate" what was fueling the reoccurring confrontations between police and demonstrators. Harrigan, true to Fox standards, seized the moment, chastising and condescending the community of Ferguson for engaging in undignified “child’s play.” His account was overheard by a few of the young protestors, who then confronted Harrigan, barking impassioned obscenities and defending their community's reputation. It is an amazing clip. Really. Here are 5 reasons why:

1. What’s happening in Ferguson, Missouri, isn’t child’s play. It’s not. Really. This needs no explanation. A black teenager was killed. And you’re making jokes about people who are upset about it.

2. You’re awkward, bro. You should feel awkward when you put yourself in awkward predicaments. Once the protester confronts Harrigan, he seems completely baffled by the man’s anger. He retreats like a child whom a parent has shamed for leaving his playpen. Harrigan's posture withers into a slump. He lowers his microphone away from his mouth, clutching it near his waist as if he can’t quite comprehend where the protester is coming from or what language he is speaking. It’s English, a bit staccato and lively, infused with adrenaline and trill bravado. Harrigan doesn’t recognize the words. So he stands, stagnant, mouth open, the sleeves of his faded, striped blue collar shirt rolled up, adjacent a man pleading with him to simply understand where he is coming from. And he has nothing to say. And it is glorious.

3. Real recognize real. This is a universal law. Science or no science. It is. If you don’t believe me, you aren’t real. I can’t make this up. Look at the protester’s face when he confronts Harrigan. His teeth are clenched, his weight is shifted into a fighter’s stance, acknowledging Harrigan’s timid presence. Simultaneously, his head is cocked to the side, with an inquisitive look on his face (like, "I know this dude didn't just say what I think he said!"). For Harrigan, the moment is a reckoning with his poorly conceived, judgmental self: when you chastise and condescend your subjects rather than tell their story, they can tell. This protestor can. Harrigan tries to reconcile and his sound fades. Meanwhile, his host, Shep, manages to, on cue, attempt in real time to deftly make sense of the situation, effortlessly improvising: “This is what happens when our bright lights shine sometimes.” Absolutely. This is exactly what happens. In fact, hopefully it will keep happening. Over. And over again.

4. When you don’t live this, don’t act like you do. What makes this particular part of the tape funny is the failed attempt at empathizing with the plight of the protester. “We’re out here. We’re out here trying to show what’s going on,” says Harrigan. Of course you are. You’re on live television standing on the side of the road just off the main strip where ground zero of the protesting has been taking place. But you just got there and haven’t been there for much more than a week. The residents of Ferguson deal with this every day. This is real life, bro. You got the nerve to call it punchlines?

5. The resolve in Ferguson is stronger than you think. Toward the end of the video, a second protester follows Harrigan as he walks away, slowly attempting to regain control of his interview. In the studio, Shep attempts to appear interested in getting to the bottom of what is going on. Harrigan obliges his colleague. Walking away from the first protester, Harrigan sums up what he feels is occurring: “Let me ask you something: Is what you’re angry about being told to stand on the sidewalk and being told to walk around. What’s your source of anger?” Harrigan asks. The protester’s body language answers the question. He stands with his wiry frame, wearing a white tank top, cocking his head triumphantly to the sky, while still looking at the camera. He puts one hand on his hip, Meteor Man-esque, and replies: “My source of anger is seeing my people — black or white, blue or brown …”

But let me cut him off. It doesn’t matter what follows. He pounds his chest with each syllable uttered. Not syllable clapping, syllable chest-pounding, which is more resolute. Harrigan can’t read his body language, however. So he asks, “What are you prepared to do? How are you going to fix this? What are you going to do?" The protester takes a step backward, cuffing arm behind his back like Morpheus instructing Neo during training exercises, wading through a sea of street traffic. Suddenly, his back straightens up and delivers a response that stifles Harrigan: “What I’m going to do is stand here with my people every night — all night — no pillow, no covers, with my twin or my brothers.”