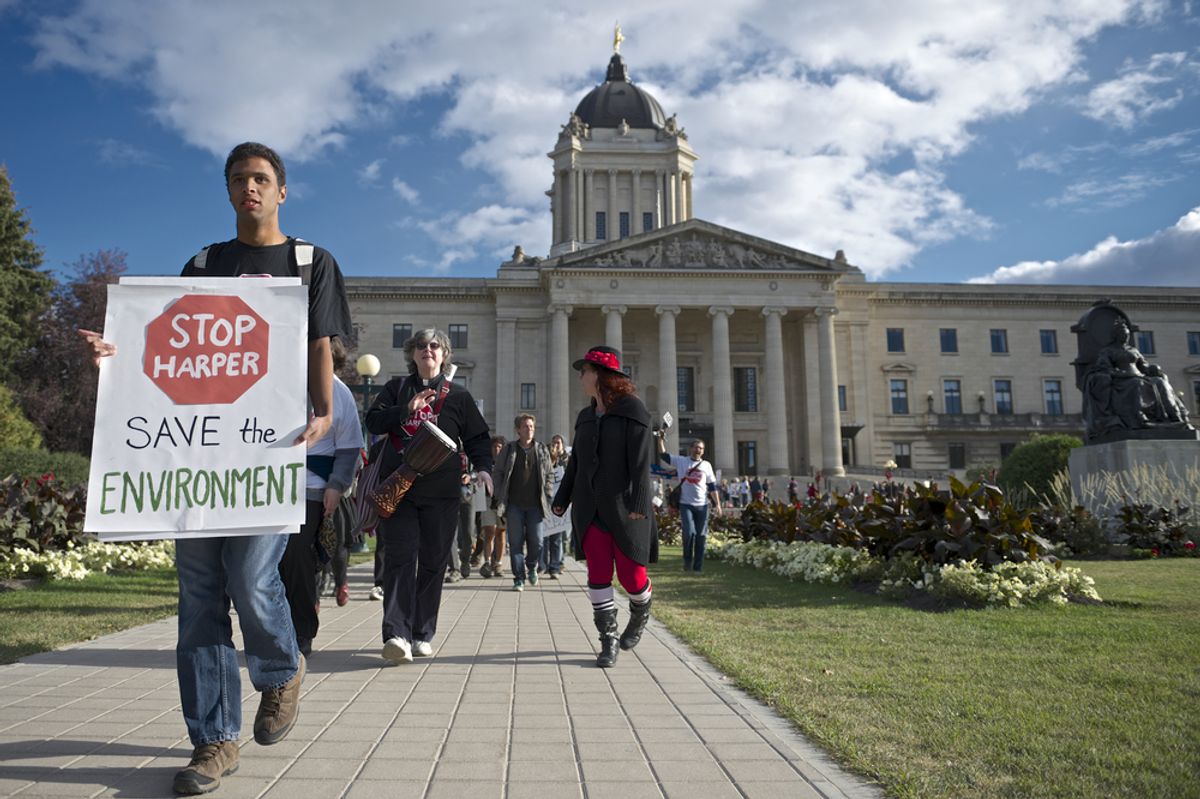 What's the best way to describe the Canadian government's avoid-the-topic-at-all-costs approach to climate change? Critics have called climate-related media censorship under its 2006 communications policy "Byzantine," "Orwellian" and "definitely a scandal." We also might want to try, as Katie Gibbs, executive director of the nonprofit group Evidence for Democracy, suggests, "suppression through bureaucracy."

Consider this account, from Postmedia News, of what happened in the summer of 2012, when federal scientists attempted to alert the public of the troubling news that Arctic sea ice cover had reached a record low:

“Less ice doesn’t mean less danger. In fact the opposite is true and there is greater need for ice information,” Leah Braithwaite, the service’s chief of applied science said in an August 2012 memo to Norman Naylor, a strategic communications adviser at Environment Canada.

Braithwaite and her colleagues — aware of the national and international interest in the shrinking polar ice — wanted to hold a “strictly factual” technical briefing for the media to inform Canadians how the ice had disappeared from not only the Northwest Passage but many normally ice-choked parts of the Arctic.

The briefing never happened. Nine levels of approval — from the director of the ice service up to the environment minister’s office — were needed for the “communication plan,” according to the documents released to Postmedia News under the Access to Information Act.

The facts, it seemed, got swept under the rug around the sixth circle of bureaucratic hell, also known as “ministerial services.” According to Postmedia, the 449 pages of heavily redacted documents don't give any reason why the briefing was canceled.

Fortunately, Canada isn't North Korea, so citizens were eventually informed of this very real manifestation of global warming occurring right under their noses -- it became headline news when the U.S. National Snow and Ice Data Center (NSIDC) reported on the shattered record instead. But even after the cat was out of the bag, communication advisers were still trying to get permission just to tweet the basic fact that “Canadian Arctic ice reached record low in summer 2012.”

In emails, the Canadian Ice Service scientists seem (justifiably) annoyed that they were "scooped" by NSIDC. But this is only the latest, outrageous example of the government's attempts to stifle conversation about climate change. Under Prime Minister Stephen Harper (who has made no secret of the fact that he's not interested in pursuing climate mitigation policies), federal scientists say they've been repeatedly "muzzled": asked to alter or exclude scientific facts from government documents and prevented from speaking to the media. In news that sounded like it was being reported by the Onion, a government spokesperson confirmed that meteorologists employed by the Harper administration aren't allowed to discuss climate change because they aren't qualified to do so. The further irony, of course, is that state climatologists, who indeed are more qualified to speak on the topic, are being silenced as well.

The most frustrating aspect of all this is just how effective it manages to be. In 2010, three years after Harper first introduced the new communications policy, Environment Canada reported that media coverage of climate change had dropped by more than 80 percent. Meanwhile, the Canadian government's continued to wage war on science, often at the expense of the environment. In 2013, when NSIDC again reported that summer sea ice was melting, Leona Aglukkaq, Harper's environment minister, downplayed the findings, explaining in a follow-up conversation that it was “debatable” whether the Arctic was warming. Without free access to the facts, one could argue, that's a pretty difficult debate to have.