Local activists in Ferguson are signing people up to vote. Republicans say this injects race into the conversation 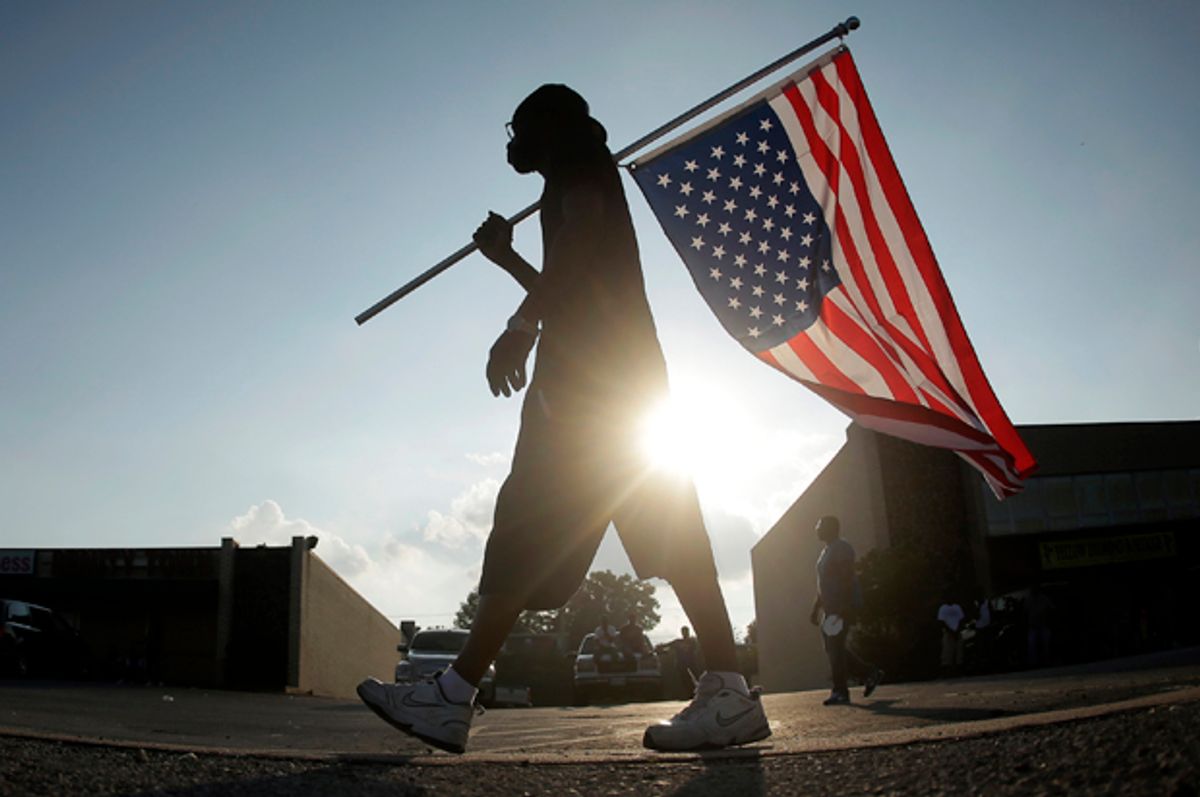 At this point, it would be safe to assume that the black community in Ferguson, Missouri, is probably feeling poorly represented by its elected officials. Over a week’s worth of unrestrained police crackdowns, curfews and bad-faith machinations by the local law enforcement – all with the blessing or tacit approval of political leaders – will tend to erode whatever trust one has left in the people in charge.

One of the upsides to living in a democracy, though, is that there are regular opportunities to boot out the people in charge. And so, with the situation spiraling out of control in the streets, activists and community leaders have set up voter registration drives in Ferguson. This act of civic engagement is drawing howls of outrage from conservatives and Republicans.

Before we get into the complaints from the right, let’s just take a moment to appreciate what is actually happening. Every night, the streets of Ferguson are filled with tear gas and less-than-lethal ordinance as cops decked out in military gear respond to protests over the killing of an unarmed black teenager. The situation is extremely tense and the threat of violence hangs over everything. In response to that, activists are saying to the community: “Yes, the system has failed you, so sign these forms and work within that same system to peacefully and proactively ameliorate the situation.”

And as ThinkProgress points out, low black voter turnout (combined with an unusual election calendar) has resulted in a local government that looks nothing like the population of Ferguson. The community is majority black, but the mayor is white, and five of the six City Council members are white. For members of the community who feel their interests aren’t being represented, the first step toward changing that is registering to vote.

For conservatives and the local GOP, this is apparently unconscionable. “If that’s not fanning the political flames, I don’t know what is,” the Missouri Republican Party executive director Matt Wills told Breitbart News. “I think it’s not only disgusting but completely inappropriate.” Again, this is in response to a voter registration drive in a majority black community.

Wills wasn’t quite through, though:

Wills explained that the shooting death of Michael Brown was a tragedy for everyone.

I don’t want to question the obvious expertise of a local Republican official, but I’m pretty sure that voter registration drives are not what’s responsible for “injecting race into this conversation and into this tragedy.”

Meanwhile, at the Daily Caller, the push to sign people up to vote is given the full-on LIBERAL CONSPIRACY treatment:

Jesse Jackson and other liberal activists are rolling out voter registration efforts as part of a coordinated left-wing push to sign up voters during the wave of violent protests engulfing Ferguson, Missouri in the aftermath of the Michael Brown shooting.

“Five thousand new voters will transform the city from top to bottom” Jackson explained during a stop at a Ferguson McDonald’s, where he discussed voter registration with local denizens.

Liberal activists — including from the George Soros-funded Center for Constitutional Rights — have promoted voter registration booths at multiple locations in Ferguson, including at the roadside memorial marking the spot where Brown was shot.

Much of this whining is couched in terms of “politicizing” the death of Michael Brown, but that’s a hollow, lazy complaint made by people who don’t quite feel comfortable saying that they’re fine with the status quo. And it’s also baffling to see people complain, in the midst of a near total civic breakdown, that there are activists encouraging people to get involved to fix the root causes of the chaos. They’re evangelizing faith in the political system and encouraging people to act within established political norms. I’m not sure how one can view that as “disgusting” and “completely inappropriate.”