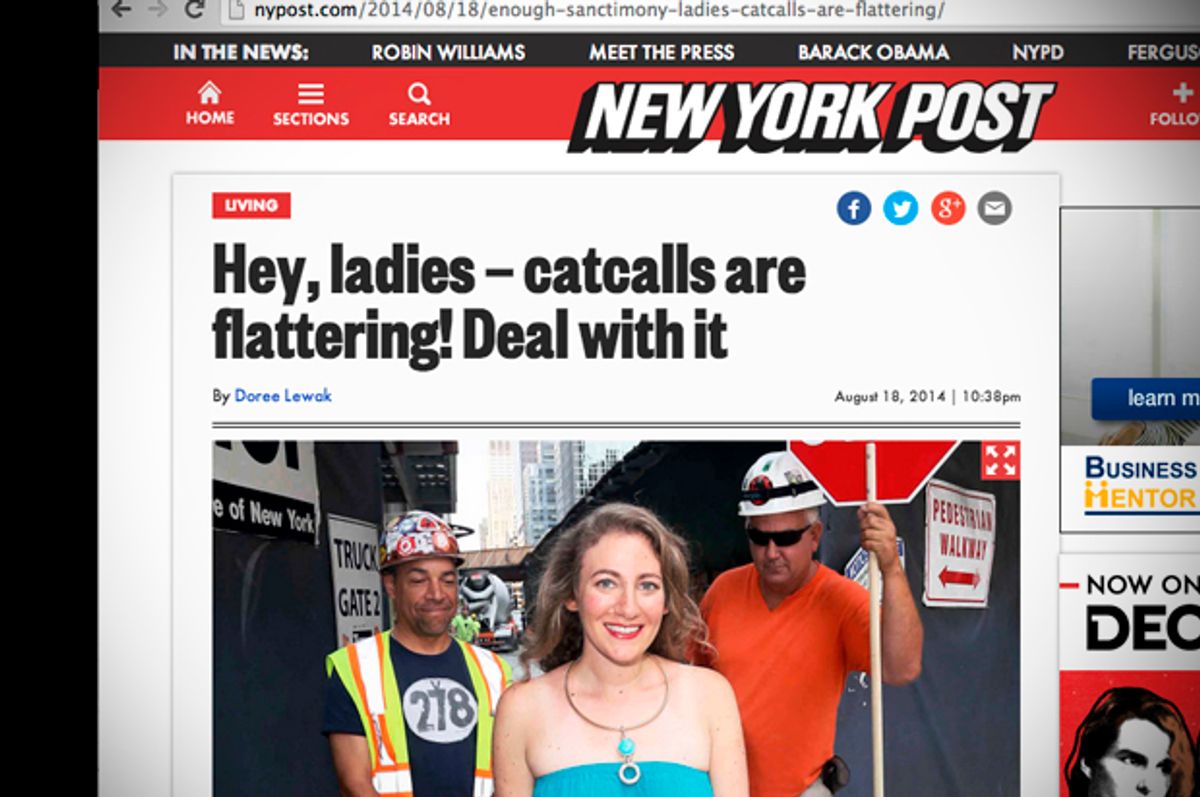 Today in straight up trolling the ladies: The New York Post would like you to know that the street harassment you endure is flattering, so "Deal with it."

In a piece clearly designed to provoke equal measures of outrage and knee-jerk "Slow news day?" comments, Post writer Doree Lewak explains why she loves summer, because it's the time of year "I can parade around in a skimpy dress with strategic cutouts that would make my mom wince. And when I know I’m looking good, I brazenly walk past a construction site, anticipating that whistle and 'Hey, mama!' catcall. Works every time — my ego and I can't fit through the door!"

Lewak is the author of a possibly intentionally humorous book called "The Panic Years," about "Life on the Wrong Side of 25 without a Ring." She is also a woman who once wrote, "The Jewish people may face existential persecution at every turn — but they’re no chopped liver when it comes to bawdy jokes," and has offered "Five ways to spot a gold digger." In her newest Post piece, she explains she enjoys living in a world "where guys tell it like they see it," because "when a total stranger notices you, it’s validating." She goes on in this manner, enjoying the "unmatched level of euphoria" that apparently only a hoot from an approving stranger can provide, while chiding the "sanctimonious" females who have lately been less enthusiastic and actively campaigning against this form of attention. And though she explains that there's a distinction between a compliment and a "crude comment," she fancies herself part of a long and noble line of happily harassed females. "I imagine the catcall stretches back to ancient construction times," she writes, "when the Israelites were building the pyramids, with scores of single Jewish women hiking up their loincloths, hoping for a little attention." That's not just nuts, that's not even historically accurate. And based on the story's accompanying photos, Lewak also appears to have a fondness for shoes several sizes too large for her, so I think it's fair to question her judgment on all things walking-around-in-public related.

I know that many humans with normal brain function understand that catcalling is not meant as flattering but as a form of aggression, one that can lead to violence against not just women but men. I know that plenty of women could offer firsthand testimony that the same kind of men who give Lewak "that butterflies-in-the-stomach feeling" with a "You're sexy" are the same guys who'll turn around and yell that another woman is fat and ugly. Because commentary! And I can't even be bothered explaining how a pro-catcalling piece furthers the narrative that females intentionally dress and walk in a manner to invite sexual attention, and that therefore whatever happens next, even if it's assault, is pretty much their own doing. I don't need to make the case against harassing people just trying to move through the world in peace. I just want to take back everything I said just yesterday about the foolishness of labeling stories as "satire," because this story desperately needs an explanation that it's just a joke.