Why hasn't Darren Wilson been arrested yet? 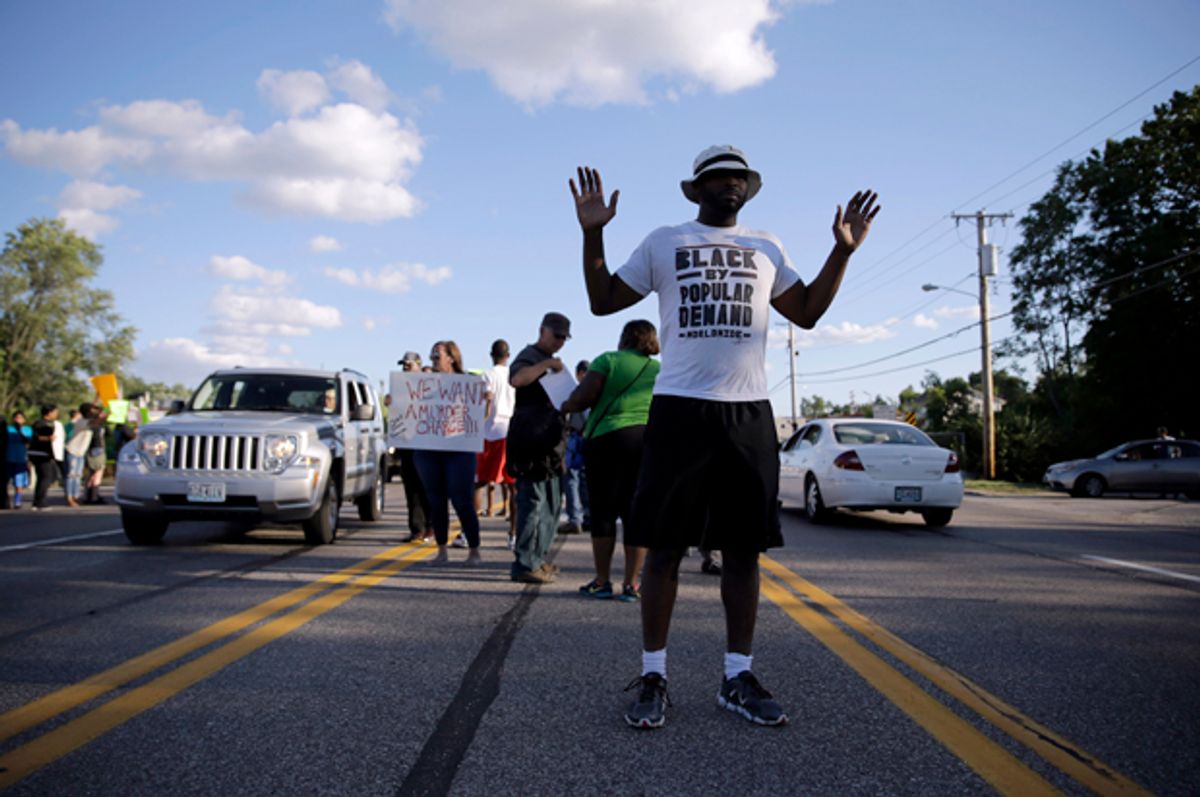 In the aftermath of 18-year-old Michael Brown's fatal shooting at the hands of Officer Darren Wilson, as protests have erupted in the streets of Ferguson and more civilians and journalists are arrested and brutalized each day, a few questions are asked over and over again. Why has there not been more transparency in the investigation? Why is the Ferguson Police Department embarking on what seems to be a smear campaign against Brown's character? And most of all, why has Officer Wilson not been arrested yet?

Salon spoke with Peter A. Joy, Henry Hitchcock Professor of Law and director of the Criminal Justice Clinic at Washington University Law in St. Louis, about why Wilson was allowed to leave Ferguson with his family days ago after slaying an unarmed teenager.

Can you speak from a legal perspective about what needs to happen now for Officer Wilson to be arrested?

The next thing is, it's also unclear what tests may have been done and if all of the results are back. For example, if blood work was done both on Officer Wilson and Mr. Brown and if they've gotten back the results of that. Some of the toxicology reports when you do blood work take longer than regular blood work that you or I might get when we go to our doctor that measures our blood sugar and so forth. So that's unclear.

In terms of the shooting reconstruction, I assume that that is all complete. Whether or not there is testing that was done, and given, at least, the accounts that we have, there should have been testing done inside the police cruiser to see if it's possible to reconstruct what may have occurred there. There's a conflicting report about whether or not the gun had gone off inside the cruiser or not. So that all has to be done.

I guess the closest analogy we might have to where the shooting takes place — somebody unarmed is killed and the person isn't arrested immediately -- could be a situation where somebody breaks into a person's house and the homeowner shoots the person and they don't immediately arrest the homeowner even though the person who broke into the house was unarmed, until they complete an investigation and see if there's sufficient justification for the homeowner to have shot the person. That is something that commonly occurs when you have those types of shootings. Out on a street shooting like this, the only reason for the delay I think is a determination at this point, trying to decide if there was sufficient reason for officer Wilson to believe he was under imminent risk or that there was a risk of public safety. From what we know, Mr. Brown was unarmed. So I guess the risk to Officer Wilson, the question mark there, is how far away from Officer Wilson was Mr. Brown? Did he have anything that he could have used as a weapon? Something in his hand. Or something that could've been a reasonable threat to the officer. Once that information comes out, it'll be much clearer to make a judgment about definitely Officer Wilson should be arrested. I mean, based on some of the witnesses' accounts, it clearly seems like he should be. But then based on some of the other conflicting information, there's this question mark about trying to get to the bottom of exactly what occurred in the final few minutes of Mr. Brown's life.

Regarding these conflicting pieces of information, do you have anything specific in mind?

For example, the former coroner from New York who did the autopsy at the request of the family said the gunshot wound to the head was either an indication that Mr. Brown was likely on his knees or could've been charging toward the police officer. So that's something — and that comes from the words of the person that was doing the autopsy for the family. Even his own statement seems to raise some question about what exactly occurred.

Are we waiting for something specific?

I think we're waiting for two things. The first thing is for the investigation to come to a conclusion and that means when both the state police — I should say the county police — are satisfied that they've exhausted all their witness interviews and there isn't anybody else out there and that all the tests have been done. And also that the federal investigators, primarily through the FBI, have concluded that they have completed their investigation. I mean one of the things the federal investigators haven't done yet is the third autopsy, the ones the feds want to do.

Once all of the investigation is totally closed, then the next step is the decision by the prosecutor to either file charges or to bring it to a grand jury. I'm expecting that unless there is information that either clearly points that there isn't any possible justification for the shooting, if there's that kind of information then I would expect the prosecutor to file charges. But if there is still some conflict and some uncertainty, I would anticipate that the prosecutor is likely to bring it to a grand jury and have the grand jury make a decision whether or not they believe there's probable cause and then indict Mr. Wilson for whatever the appropriate charge is based upon the evidence they have.