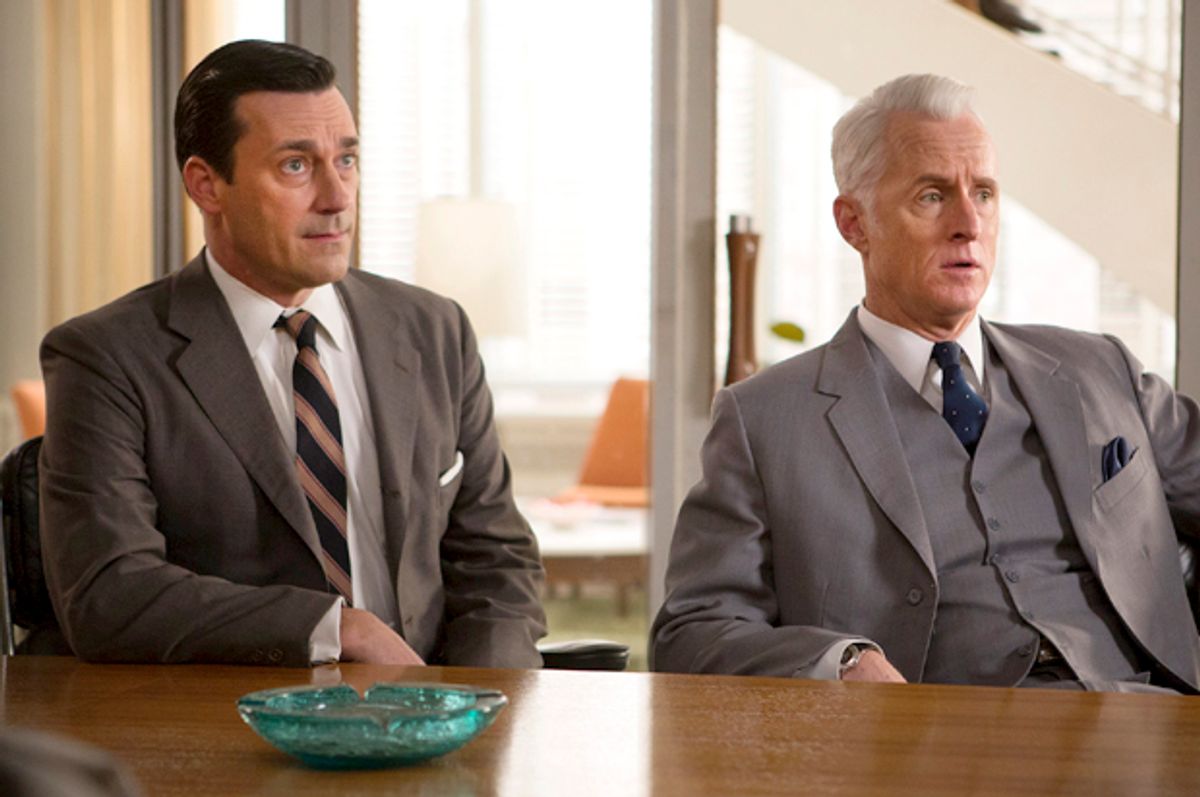 Jon Hamm has been, for seven seasons, among the most easily recognizable stars in the prestige-TV firmament. But you wouldn't know it from the Emmy Awards, which have honored "Mad Men" as the best drama of the year four times but have never once honored any of the show's actors. And now the aging show has lost a lot of its heat and seems unlikely to win any awards at all this time around. But there's no time like the present to rectify what could go down as one of the nastiest sustained losing streaks of all time.

Each individual performer's history with the Emmys makes sense, sort of. Hamm, for instance, has consistently lost to a performer with just a little bit more buzz. Each of the actors who trounced Hamm was enjoying a cultural moment in a way the solid, reliable Hamm never really has: For three years, the Emmy went to rising star Bryan Cranston of "Breaking Bad," then Kyle Chandler for the final season of "Friday Night Lights," Damian Lewis for the breakout first season of "Homeland," and Jeff Daniels for "The Newsroom." That last one's a little inexplicable, but after a certain point, no one expected Jon Hamm to win; trophies aren't given to blue-chip stocks. The same is true of Christina Hendricks, who's been beaten four years in a row, each time by a performer who had meatier material -- most recently, the best supporting actress trophy went to "Breaking Bad's" Anna Gunn.

The actors themselves have remarked upon the phenomenon -- and are good sports about having to keep showing up at awards shows to hear other people's names read. Hendricks recently told an interviewer, "We joke we've got the 'Mad Men' curse — none of us has ever won. One of us has to break it at some point, right?"  Jon Hamm even had an "Emmy losers' party" last year. It's all in good fun, sure, but the actors aren't wrong that the absence of acting Emmys in the huge pile of awards "Mad Men" has won is a bit surprising.

It's perhaps a bit sour grapes-y to argue that the reason that "Mad Men's" actors don't win Emmys is because they're so consistently good -- but it's also true. The show asks its performers to track slow evolutions over time; if Elisabeth Moss or January Jones (both of whom have lost Emmys, too) had big Emmys-clip moments, it would probably feel out-of-place in the context of the show.

And unlike, say, Bryan Cranston's performance in the early, undercooked seasons of "Breaking Bad" or Maggie Smith's on a fading "Downton Abbey," no performer stands out as uniquely better than the material. The "Mad Men" actors are, at the Emmys, treated like the furniture in part because they seem as harmoniously coordinated as the show's well-appointed interiors. No one seems prize-worthy because they all do.

The reliability of "Mad Men's" quality has meant that there's never been a moment when it felt like Hamm or Hendricks or Moss had to be rewarded. There would always be another season.

Until there wouldn't; this Emmys is the second-to-last at which "Mad Men" will compete. But there seems to be a fairly cavalier attitude toward the series as newer and more bombastic shows have caught the public's imagination. The show has won zero Emmys at all in the past two ceremonies, and is only nominated in four categories, including best drama, this time around -- it was overlooked for its writing and its directing. Fittingly, given how consistently good-but-not-showy-enough they are, it's only the actors (Hamm, Hendricks and Robert Morse) who are Emmy-nominated for their work on the show. Though Hamm and Hendricks seem likely to lose again, Robert Morse seems like the best bet to pick up a prize for his moving, strange musical sendoff. But though the performance was as well acted as anything else on "Mad Men," it was unusual for the show -- a rare moment of over-the-top theatricality for a show that's traditionally prized quiet exchanges and complicated silence.  So it's disappointing, but not surprising, that Morse just lost a Creative Arts Emmy to an actor from "Scandal."