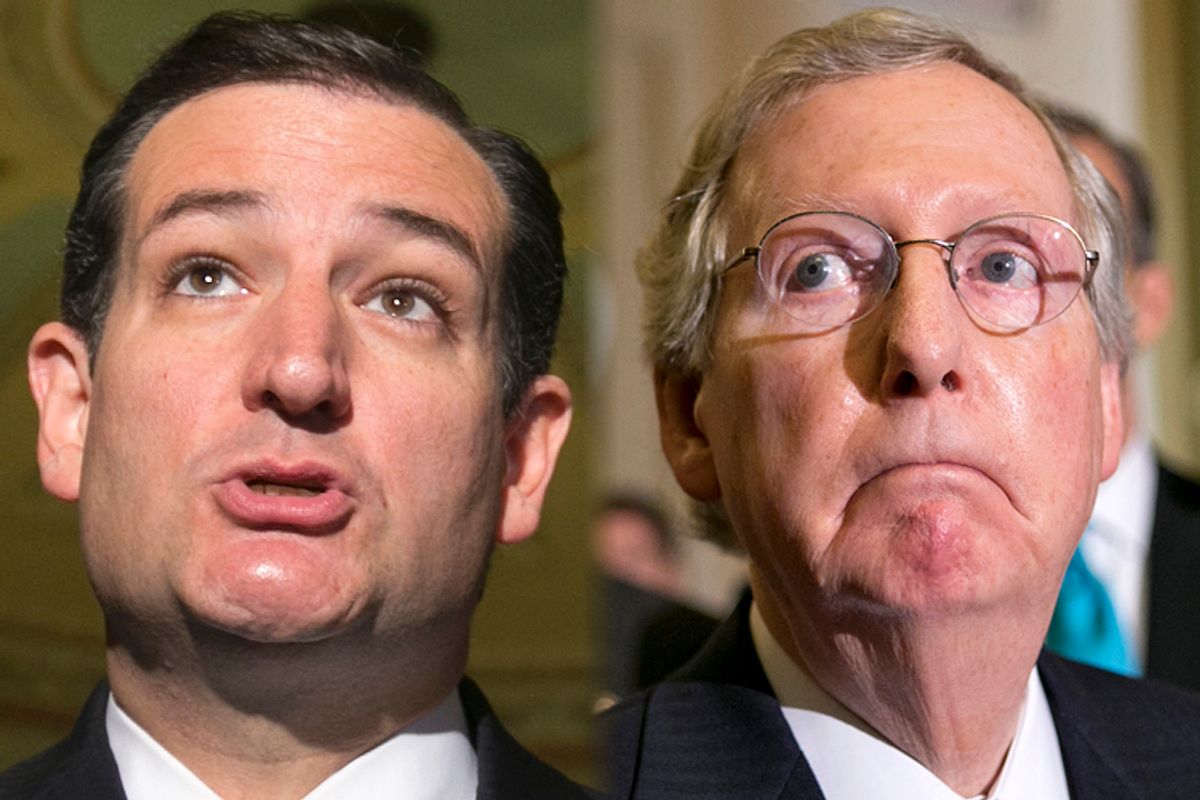 Earlier this year, legislative gridlock had settled into a relatively stable pattern in which no actual legislation was being passed, but no defaults or shutdowns were looming. Given that we’d spent the past couple of years staggering from self-made crisis to self-made crisis, a number of pundits remarked that this comparatively benign state of inertia was basically the best we could hope for.

This past June, as people wondered what would come next, I took the cynic’s bet and wagered that if Republicans were to take control of the Senate in November, we’d see a quick return to crisis governance. Well, I’d like to take a moment to thank Mitch McConnell for justifying my cynicism.

Interviewed by Politico aboard his campaign bus, the Senate minority leader offered his vision for the Senate should he be promoted to majority leader: confrontation, manufactured crises, and the ever-present threat of a government shutdown:

In an extensive interview here, the typically reserved McConnell laid out his clearest thinking yet of how he would lead the Senate if Republicans gain control of the chamber. The emerging strategy: Attach riders to spending bills that would limit Obama policies on everything from the environment to health care, consider using an arcane budget tactic to circumvent Democratic filibusters and force the president to “move to the center” if he wants to get any new legislation through Congress.

“Move to the center” is a clever euphemism for “pay ransom in exchange for hostages.” And I’m not putting words in anyone’s mouth here – back in 2011, McConnell was asked what lessons he learned from threatening to put the government in default in order to extract concessions from the White House, and he said the debt limit was “a hostage that’s worth ransoming.”

However, earlier this year, after the Republicans’ debt-limit extortion strategy collapsed in on itself, McConnell voted to advance a “clean” debt limit bill, angering conservatives who felt he’d caved to the administration. McConnell justified his vote after-the-fact by saying: “It was clear that we needed to produce enough procedural votes to get to a debt ceiling vote in order to avoid a default. My job is to protect the country when I can, and to step up and lead on those occasions when it’s required. That’s what I did.”

So he’s a bit inconsistent on the virtues and dangers of crisis governance, but it’s going to be his strategy going into 2015 regardless. And even if McConnell weren’t on record praising hostage-taking as a style of governing, he has little choice in the matter.

If Republicans take over the Senate, antsy conservatives are going to want their agenda – namely, rolling back the Obama agenda – untainted by compromise. And they’re going to want it done quickly, given that the 2016 Senate map very much favors the Democrats. That’s not a feat McConnell will be able to achieve through the normal legislative process, owing to the threat of Democratic filibusters and Obama’s veto pen. So he’ll have to play chicken with the president and threaten to undermine the basic functions of government in order to get his way. If he doesn’t, he’ll have loudmouths like Ted Cruz undermining him at every turn and fomenting rebellions within his own caucus (John Boehner can attest to that).

The question before today was whether McConnell and the rest of the Senate Republican leadership were frightened enough of their own caucus to risk going down the self-destructive and politically disastrous path advocated by Cruz and his compatriots. Now we know.