The Michael Brown case hinges on this one detail

Some eyewitnesses report having seen Brown approach Officer Darren Wilson, making him fear for his life 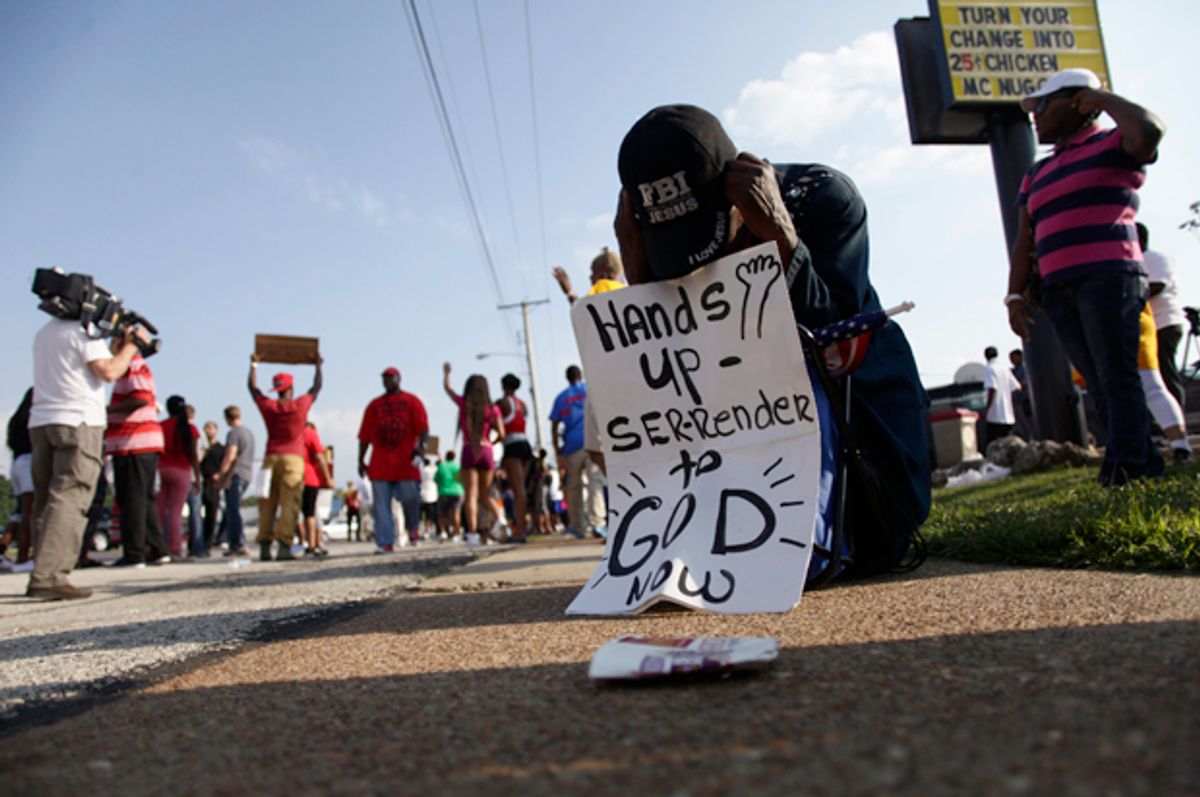 A demonstrator kneels and prays during a protest against the shooting death of Michael Brown in Ferguson, Missouri August 18, 2014. (Reuters/Joshua Lott)
--

As a grand jury is set to convene today to hear evidence related to teenager Michael Brown's death, conflicting eyewitness accounts of the shooting are gaining traction.

All accounts agree that the altercation between Michael Brown and Officer Darren Wilson began inside Wilson's patrol car with Brown leaning in through the window -- some say Wilson grabbed Brown's clothing, while others believe Brown might have threatened the officer. The gun then went off in the patrol car (who fired the gun is unclear) and Brown ran away as Wilson got out of his car and began firing at the teen.

Wilson's defense entirely hangs on what happened next, and witnesses seem to be divided. The best-known account goes that Brown turned back toward Wilson and put his hands in the air in the universal sign of surrender, when Wilson shot the teen in cold blood. Others say that Brown moved toward Wilson, possibly in an aggressive way, leading Wilson to believe that his life was in danger. It was then, some say, that Wilson decided to shoot Brown in self-defense.

The New York Times reported on the conflicting statements:

What happened next could be what the case turns on. Several witnesses have told investigators that Mr. Brown stopped and turned around with his arms up.

According to his account to the Ferguson police, Officer Wilson said that Mr. Brown had lowered his arms and moved toward him, law enforcement officials said. Fearing that the teenager was going to attack him, the officer decided to use deadly force. Some witnesses have backed up that account. Others, however — including Mr. [Dorian]  Johnson — have said that Mr. Brown did not move toward the officer before the final shots were fired.

A lawyer for the police union, Greg Kloeppel, did not return calls for comment.

The F.B.I., Mr. [Freeman R. Bosley Jr.] said, pressed Mr. Johnson to say how high Mr. Brown’s hands were. Mr. Johnson said that his hands were not that high, and that one was lower than the other, because he appeared to be “favoring it,” the lawyer said.

James McKnight, who also said he saw the shooting, said that Mr. Brown’s hands were up right after he turned around to face the officer.

“I saw him stumble toward the officer, but not rush at him,” Mr. McKnight said in a brief interview. “The officer was about six or seven feet away from him.”

The members of the grand jury will hear from a variety of witnesses, including Wilson if he opts to testify. It is unclear how many witnesses will be called, or how long the proceedings will take. It will then be up to the grand jury to decide if Wilson should be indicted.