PricewaterhouseCoopers isn't just your friendly Oscars auditing firm. It's also got quite a swindle going 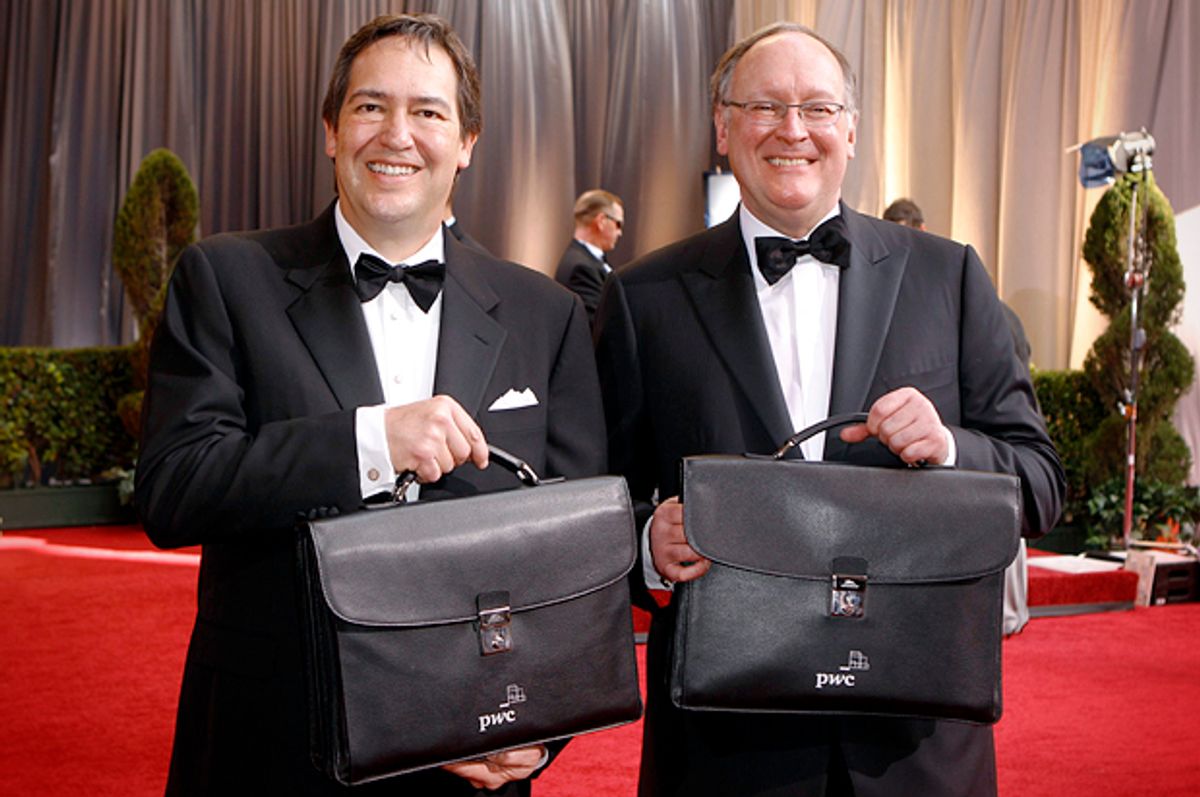 The results of the Academy Awards balloting are carried up the red carpet by Price Waterhouse Coopers accountants Rick Rosas and Brad Oltmans, February 26, 2012. (Reuters/Lucas Jackson)
--

On Monday, New York’s top banking regulator, Benjamin Lawsky, announced an enforcement action against PricewaterhouseCoopers (PwC), the venerable auditing firm you might know from its work tabulating votes at the Academy Awards. But when it's not ensuring fairness in the best supporting actress race, PwC makes its money engaged in one of the most insidious practices in the financial industry – operating as a third-party “consultant” for major banks, with far more loyalty to the firms that hire them than the truth.

Over the past several years, one way banks have devised to get themselves out of trouble is to hire consultants to head up “independent” investigations into their operations. Because state and federal regulators often don’t have the resources for such an intense inquiry, the consultants often step in as a shadow regulator, performing the work of bank examiners. Regulators increasingly require independent consultant reviews as part of their enforcement actions. However, these consultants are typically handpicked and paid for by the bank they intend to examine.

The potential for abuse in that relationship is clear. If your promise of future work depends on a continued positive relationship with your employer, you’d be the last person willing to rat them out to the federal government for misconduct. And third-party consulting has become big business indeed, as well as a way station for ex-regulators wanting to make real money out of government.

One large consulting firm, Promontory Financial, was founded by Gene Ludwig, former head of the Office of the Comptroller of the Currency (OCC), the national bank regulator, under Bill Clinton. When SEC chairwoman Mary Schapiro left her position last year, she joined Promontory. When longtime OCC chief counsel Julie Williams retired, she joined Promontory (and a managing director at Promontory replaced her!). Top Promontory officials routinely make seven-figure salaries, and the banks don’t really pay for their objective analysis or advice. They’re paying for the credibility and influence of those ex-regulators. If Gene Ludwig or some other insider gives a bank a clean bill of health, it gives them a better chance to escape scrutiny unscathed.

Promontory, PwC and other consultants were supposed to perform independent reviews of the foreclosure cases of 14 mortgage servicers, to determine the extent of errors, under an enforcement action by the OCC and the Federal Reserve. However, despite consultants being paid more than $2 billion by the banks, the reviews were a mess, eventually aborted in favor of tiny cash settlements for homeowners, as little as $300.

That discrepancy finally got the attention of Congress, who held hearings on bank consultants last April. The hearings focused on the lack of transparency in consulting contracts, and troubling hints of conflict of interest. The OCC promised to write clearer guidelines for consultants used in enforcement actions.

But nobody at the federal level bothered to investigate consultant activity to see whether it truly reflected objective analysis. So Lawsky, the head of New York’s Department of Financial Services (NYDFS), took the lead. He issued subpoenas to both PwC and Promontory last September, over their work for banks that facilitated illegal money-laundering transactions for countries under U.S. sanction, like Iran and Sudan.

The Bank of Tokyo-Mitsubishi UFJ hired PwC in 2007 to analyze its dollar-clearing operations. The report PwC eventually submitted did lead to the bank paying $250 million last year, due to at least 28,000 illegally cleared transactions with sanctioned countries and individuals. However, upon scrutinizing PwC’s work, NYDFS found that the consultant softened its report on Bank of Tokyo, at the bank’s request.

In the course of its review, PwC learned that Bank of Tokyo would routinely strip identifying information from its wire transfers involving sanctioned countries, masking the identity of the client. PwC originally included a statement in its report recommending that, had it known this previously, it would have undertaken a “forensic review” of Bank of Tokyo wire transfers. But when Bank of Tokyo objected to this statement, PwC removed it, instead writing that its methodology “was appropriate.”

NYDFS’ investigation turned up a host of other edits requested by the bank, most of which made their way into PwC’s final report, used to extrapolate the eventual fine against Bank of Tokyo. PwC deleted most of the discussion of Bank of Tokyo’s wire-stripping activities, including the English translation of the specific wire-stripping instructions, as well as the ways in which Bank of Tokyo would alter software code to evade oversight on its activities with sanctioned countries. In other words, while the purpose of this report was to gauge the extent of Bank of Tokyo’s illegal activities, PwC left out key evidence that proved the illegality.

NYDFS also found emails from a top PwC executive, repeatedly cautioning that adding information about Bank of Tokyo’s wire-stripping in the report would “only raise questions,” and would not “do anyone, especially the bank, any good.” This executive wasn’t reprimanded for looking out for the bank more than the integrity of the report, but he eventually became a partner at the firm.

As a result of this discovery, Lawsky’s agency fined PwC $25 million, forced a series of reforms at the consultant, and clawed back 20 percent of that particular executive’s salary. Most important, PwC’s Regulatory Advisory Services Group, which conducted the study, cannot take any new work from any firm regulated by NYDFS for two years. This effectively bans them from the industry, as NYDFS regulates every national financial institution in the nation.

This follows on an action by Lawsky last year against a division of Deloitte, imposing a one-year consulting ban for its lack of objectivity in work for Standard Chartered Bank. And under his new standards, NYDFS picks the independent monitor to review compliance. In fact, NYDFS just hit Standard Chartered with a $300 million fine yesterday for failing to comply with anti-money laundering reforms from a previous order. NYDFS’ independent monitor uncovered the noncompliance.

In a statement clearly intended for his fellow regulators, Lawsky said, “We are continuing to find examples of improper influence and misconduct in the bank consulting industry. As a regulatory community, it may well be advisable for us to take a hard look in the mirror ... When bank executives pressure a consultant to whitewash a supposedly 'objective' report to regulators – and the consultant goes along with it – that can strike at the very heart of our system of prudential oversight.”

Federal bank regulators should pay attention. The consulting industry has become an attractive destination for those rotating out of government or Wall Street, a way to trade on past connections and reap benefits from it. No reasonable observer thinks that consultants chosen and paid by the banks they scrutinize can produce truly objective analysis. And they certainly cannot stand in for independent regulatory oversight. Yet the gravy train rolled along, until NYDFS decided to try to put a stop to it.

That it comes from Lawsky will likely rankle federal regulators, who have repeatedly been shown up by the one individual who dares to take his job seriously. But with additional revelations, even they will have to admit that “independent” consultants merely represent a layer of protection for banks, which ought to be stripped away if we want to truly deter financial misbehavior.