In addition to daily protests, people in Ferguson are ensuring kids' needs are met and families aren't going hungry 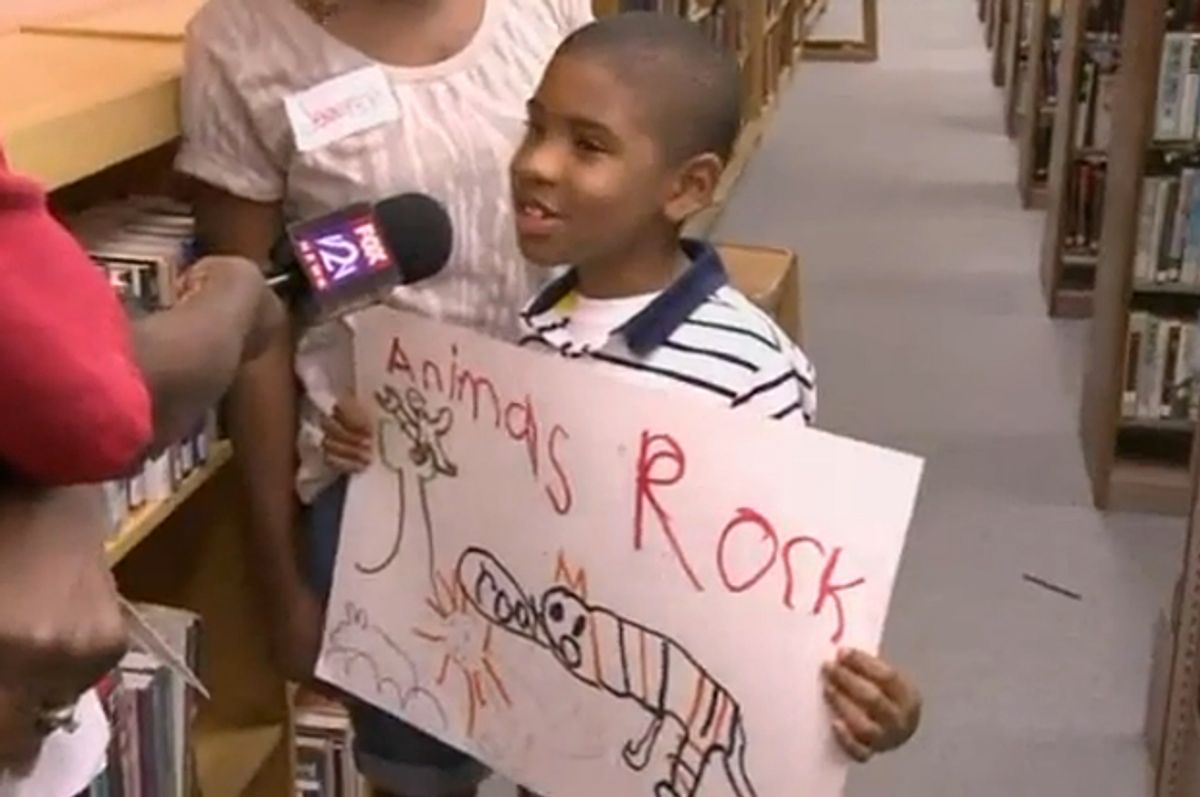 A child at the Ferguson Public Library (Fox News 2)
--

Classes at the Ferguson Florissant School District are canceled through the end of the week, leaving the 68 percent of the student body who receive reduced-price or free lunches without reliable access to those meals. In the days following the shooting, the food pantry at St. Stephen's Episcopal Church also closed, its shelves largely empty.

But as Sasha Belenky at the Huffington Post reports, in addition to showing up on the streets to protest Brown's death and police violence, community members and other people have turned out in force to stock pantry shelves, open the libraries to children who should be in school and otherwise meet the needs of their neighbors. Freedom from violence is a reproductive justice issue. The community response challenging that violence -- and the food insecurity and barriers to education that violence exacerbates -- is, too.

"Our parking lot was pretty much full with folks showing up and getting food," Rev. Steve Lawler told the HuffPost, noting the surge of donations he received. "There's just great people out doing all kinds of good things." And as Salon's Joanna Rothkopf noted this week, the St. Louis Area Food Bank is poised to received more than $140,000 in donations through an online fundraising campaign led by a public school teacher in North Carolina.

And while schools remain closed through Monday, teachers, parents and other volunteers in Ferguson have turned local libraries into de facto classrooms. Classes are held from 9 a.m. to 4 p.m. each day, with volunteers doing art, reading and other activities with kids. Jennifer West, a local parent, told Fox News 2, "They know that other kids are going back to school. They have cousins going back to school. And they're wondering why they can't go back."

Churches and other local community groups have also organized drop-in centers for children and families. In addition to providing activities for kids like kickball and soccer, counselors were available to meet with parents and older children to discuss what's happening around them, addressing self-care and mental health issues.

More from the HuffPost:

The idea for the drop-in center emerged at a local community meeting last Thursday. Ellicia Qualls, executive director of the Urban Sprouts Child Development Center, which has locations in nearby University City and Olivette, had been concerned that, as protesters and the media descended on Ferguson, the community's needs were being forgotten. And with school canceled until next week, kids often had nowhere to go.

"I thought it'd be good to put together a respite-type event where parents could come and we would have activities for their children, and partner agencies would then provide resources to help them sustain," Qualls said.

When she and an Urban Sprouts parent, Bijal Desai-Ramirez, proposed the event at the community meeting, "the agencies stepped right up," Qualls said.

"What really sticks with me is that we said everything that was going to be there: These are the partnering agencies, we'll have counseling, we'll have provisions and resources, basic needs that you can take with you, and we'll also have all these activities for kids, because our babies just need a break," Desai-Ramirez said. "That's when I saw people's faces sort of change. They exhaled and released, and they said, 'Yes, that's what we need, we need a break.' That really resonated with me."