Kill the Bookends column: Why the New York Times Book Review's most frustrating feature has to go

Sure, Bookends seems harmless enough. But it actually represents the worst impulses of today's critical culture 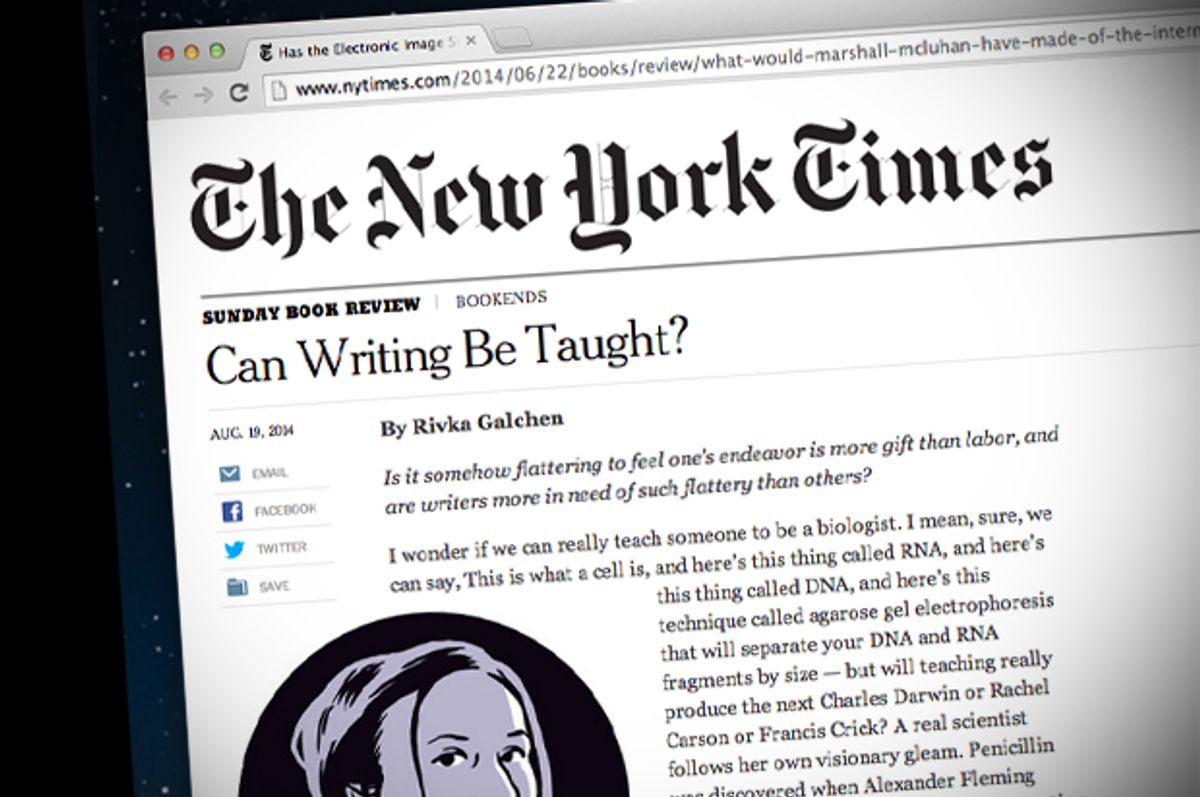 Here is a question:

‘Write What You Know’: Helpful Advice or Idle Cliché?

And here is another:

What’s Behind the Notion That Nonfiction Is More ‘Relevant’ Than Fiction?

Are Categories Like Immigrant Fiction and ‘New American’ Fiction Valid or Worthwhile?

Highbrow, Lowbrow, Middlebrow — Do These Kinds of Cultural Categories Mean Anything Anymore?
What Are We Meant to Get Out of Movies Based on Short Stories and Novels?
What Would Aldous Huxley Make of the Way We Consume Media and Popular Culture?

These prompts — in their gaping open-endedness and leaden non-urgency — take me back to ninth grade English. I am drafting my thesis statement and outlining three supporting paragraphs. I am citing specific examples from the works we read this semester.

Unfortunately, instead of eliciting goofy pronouncements from 14-year-old me (I remember “there are both similarities and differences” getting a real workout back then), these are the questions that the New York Times is asking Francine Prose, Daniel Mendelsohn, Anna Holmes and the nine other word-professionals who make up its roster of Bookends columnists.

The Bookends column launched last fall as part of a Book Review overhaul that included a redesign and several new features. Each week, two writers drawn from a lineup of 12 novelists, critics and essayists offer responses of roughly 600 words to a given question. At first, the column’s weekly introduction promised these would be “pressing and provocative questions about the world of books.” Four months in, the introduction quietly downgraded them to “questions about the world of books.”

It’s not just the stiff phrasing (“What should we make of this?” “What’s behind the notion?”) that gives Bookends its blue-books-and-binder-paper feel. It’s also the whole concept of a column designed to offer only the gentlest, most dutiful provocations. Sometimes the tone of the approach is more break-room small talk (“Do You Get in Any Reading Over the Holidays?”) than in-class essay, but the effect of these requests is the same: say words because you must, even though it doesn’t really matter which words you say, because we’ll be doing this at the same time next week.

I do not always agree with Jennifer Weiner, but on the subject of this column I think she may be on to something. Bookends “displays the qualities its writers abhor,” tweeted Weiner of last September’s inaugural edition. “It’s toothless, tepid, engineered not to offend or provoke. So what’s the point?”

Weiner’s dissatisfaction with the new column extended to the selection of columnists (“Commercial writers: zero”), and it’s there we part company. I’m impressed with the writers the Times has chosen — Leslie Jamison, with her acute sense for the intersections of literature and lived experience; James Parker, with his wide-ranging critical wit — but disappointed with the task they’ve been given. “Engineered” seems like an apt word choice on Weiner’s part: The things that make Bookends so deeply uncompelling are central to its structure.

The two writers-one topic approach wards off the impression that anyone is expressing a distinct and urgent belief; a question one person must answer is not guaranteed to be a question that two people can answer. The topic of the column becomes “topics about which it is possible to write a column.” And the relationship between the two responses does not necessarily involve any tension or contrast. When a report in the Wire characterized the column’s concept as “a debate,” a Times editor wrote in with a correction: “More a pairing of opinions,” she clarified.

Given all this, it’s probably fair that the signature move of the Bookends columnist is to politely dodge the question. What Are We Meant to Get Out of Movies Based on Short Stories and Novels? Well: “There are no sensible generalizations to be made about what we’re ‘meant to get’ from film adaptations,” writes Zoe Heller, “other than, perhaps, good movies.” What Are the Last Literary Taboos? “If there are literary taboos, they’re not being imposed by writers or readers, and certainly not by a puritanical culture,” writes Francine Prose. What’s Your Favorite Out-of-Print Book? “In the age of the Internet, it might not seem to matter much whether a book is technically out of print,” Adam Kirsch reminds us.

Technology is a recurrent concern, and the attitude suggested by the questions — if not by not the columnists themselves — is wary.  How Do E-Books Change the Reading Experience? How Has Twitter Changed the Role of the Literary Critic? How Have Tools Like Google and YouTube Changed the Way You Work? Has the Electronic Image Supplanted the Written Word? These questions seem to demand responses in the tense of “nowadays.” (Rivka Galchen has gently tweaked this expectation, answering prompts about Google and Marshall McLuhan with playful riffs on the clichés of discussing technology.)

This is all particularly notable because the column appeared at the outset like a move to bring a more Web-friendly sensibility to the Book Review: a range of voices, a conversational format, a lively exchange of ideas. Instead, amid the tight focus and neat efficiency of the book reviews that surround it, Bookends seems to sprawl and drift in pursuit of some vaguely conceived ordinary reader. Where the reviews perform an established function precisely (What is this book? Why do we care?), Bookends grasps at those elusive qualities that, when editors seek to conjure them online, get called “clicky,” or “relatable,” or “shareable.”

In fact, I’ve come to think that the banality of Bookends is actually more significant than it seems — it neatly illustrates the draining mechanics of how online criticism and cultural analysis can work.

By which I mean, like this: A potentially opinion-worthy topic presents itself. A community of professional take-havers finds itself obliged to opine. The takes they generate may or may not be strongly held; they may or may not add up to some sort of dialogue. Regardless, they will be forgotten by next week, when a new object of obligatory opinion-having looms into view. Whether the object is “the draws and drawbacks of success for writers” or “Iggy Azalea” does not really improve the dynamic; although “the draws and drawbacks,” with its bald lack of novelty, makes it easier to tell that something boring is happening.

If I’m joking slightly here, it’s because I’m feeling complicit, because I edit and write and happily read all this stuff all the time. But sometimes it makes me feel like my eyeballs are frozen open and unable to properly focus, like I’m staring at Magic Eye swirls 6 inches behind my screen, which is the best way I can articulate the exact sensation of boredom and anxiety (What’s happening? I’m still not moving) that looking too long at the Internet can provoke. And while there are many great things about the Web that the Book Review might do well to absorb, its eyeball-freezing property is not among them.

One of the Bookends columnists, Jezebel founder Anna Holmes, recently discussed her weariness with the churn of online opinions about “every little fucking thing that happens in the culture.”

“I don’t want to be publishing a series of think pieces of everything that happens every single day,” she said in an interview about her new job at Fusion. Her “fatigue with think pieces” came from “the compulsion, or seeming compulsion, or pressure to have people to quote/unquote ‘weigh in’ on stuff immediately,” she clarified later.

The Internet is, for better or worse, where writers now bear the burden of reacting. Wondering what was up with last night’s “True Detective,” readers turn to the recap-sphere; there’s value in satisfying that need. No one, however, is opening the Times Book Review in search of a digestible, disposable mini-opinion on the question, “When We Read Fiction, How Relevant Is the Author’s Biography?”

The perch these columnists have achieved ought to liberate them from the obligation of weighing in on pre-chewed non-controversies — and free them up to write things that are more idiosyncratic, or personal (the best Bookends installment so far was “Is There Anything You Did as a Writer Starting Out That You Now Regret?”), or surprising.

It’s hard enough to review a book in 800 words. But to address book-size questions about the nature of literature in that space is probably impossible. If the Internet requires a constant stream of takes, on matters of all sizes, the New York Times Book Review does not. And to impose this mentality on the country’s last free-standing book section seems like a particularly cruel trespass. So leave the essay prompts to the high school freshmen, Times Book Review, and let the writers make something new.