"Love Is Strange": More than a gay-marriage story, a gorgeous fable of American life 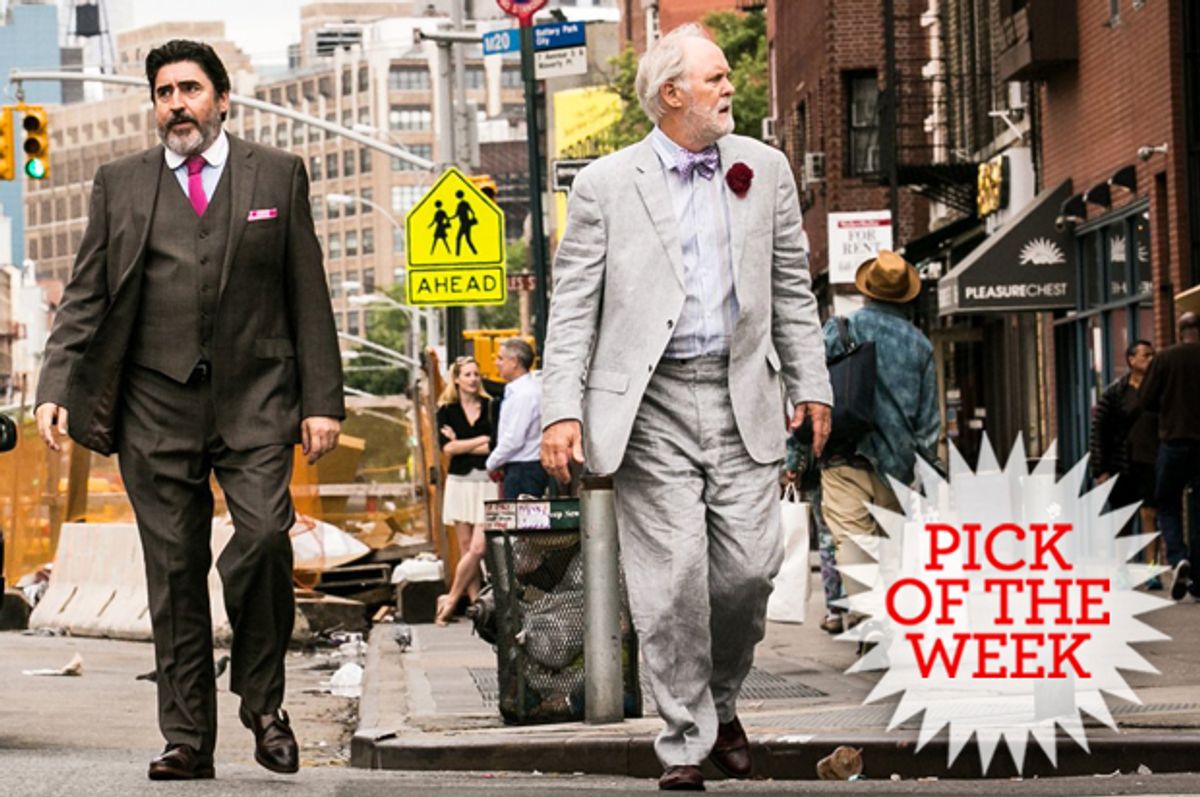 Alfred Molina and John Lithgow in "Love Is Strange"
--

Ira Sachs is sneaking up on us as one of America’s most important filmmakers. His new movie, “Love Is Strange,” sneaks up on you too. It feels, for a while, like a mild and episodic “issues drama,” built around the charm and appeal of John Lithgow and Alfred Molina playing an older gay couple. You need to give “Love Is Strange” your eyes and ears and attention, let it work its effects on you gradually, like the lovely Chopin piano music that forms the spine of its soundtrack. I know that’s a tough thing to manage these days; there's no reason to feel judgmental toward people who get bored by this movie or who conclude that it has modest aims. But it doesn’t, and they're missing out.

I don’t think “Love Is Strange” is about the same-sex marriage issue at all, although the fact that Ben (Lithgow) and George (Molina) can finally get hitched after almost 40 years together is a key plot point. Sachs is devoted to capturing the specific social milieu around two aging gay men in 21st-century Manhattan, and in that sense their sexual orientation is an important part of the story. But as in Sachs’ earlier autobiographical film about New York gay life, the imploding-relationship drama “Keep the Lights On,” it’s also a social milieu where people care a lot less about sexual orientation than they used to. In one scene, Ben’s teenage great-nephew, Joey (the marvelous young actor Charlie Tahan), insults a friend with the casual remark, “That’s so gay.” There’s an awkward pause, and the friend apologetically interposes, “He doesn’t mean homosexual, Uncle Ben.”

But the larger point is that “Love Is Strange” is a blend of gentle comedy and romantic tragedy, a subtly woven multigenerational tapestry about love and sorrow, the families we’re born with and the ones we make for ourselves, the things that pass away forever and the things that endure and are passed along. There’s nothing particularly gay or straight about those questions, which I suppose is the point. Sachs is an extremely disciplined formal filmmaker and a serious student of cinema, and in this film he’s clearly drawing on a tradition of intense relationship dramas that includes Yasujiro Ozu, Ingmar Bergman, John Cassavetes and the relatively obscure French director Maurice Pialat, who is Sachs’ particular avatar. None of that matters if the method doesn’t pay off, of course, and all I can tell you is that during the final seconds of “Love Is Strange” I was utterly transported, and sat there in the dark with tears running down my face.

We begin on Ben and George’s wedding day, and while the ceremony itself is an idyllic love-fest of friends and family – maybe a smidgen too much so – they have some difficulty getting there. All the food is ready and the guests are on their way, and then Sachs gives us a scene you’d never see in anybody else’s marriage movie: The two guys in their best duds, wandering the streets of lower Manhattan in search of a cab and quibbling irritably: “We should have hired a car service!” “Will you slow down? I don’t want to get all sweaty.” A great deal of “Love Is Strange,” in fact, consists of in-between moments where officially not much is happening: George sitting awkwardly on the sofa at a party where he doesn’t know anybody, or Ben trying to disappear into the woodwork of the apartment where his nephew Elliot (Darren Burrows), his wife, Kate (Marisa Tomei), and their son Joey are having a family argument.

Ben is a painter who never quite enjoyed the success he once expected, and George is a music teacher who directs the choir at a Catholic high school. They may be aesthetes, and once upon a time they may have been bohemians, but for want of a better word, they are now profoundly square. The last thing they expect is for their embrace of the profoundly square institution of marriage to cost them their livelihoods and their home. But George is employed by the Archdiocese of New York, which was content to overlook his sexuality as a DADT matter for many years, but is not willing to ignore his public state of matrimony. Sadly, this is entirely plausible: The American church is built on the rock of private hypocrisy, combined with public moralizing. As they do throughout a film that is both sad and optimistic, Sachs and co-writer Mauricio Zacharias frame this issue not as a political confrontation, but a matter of quiet confidence in the long-term arc of justice. When the priest who fires George then invites him to pray, George replies, “My faith in Jesus Christ as my savior has not changed, Father. But I think I’ll pray on my own.”

It’s impossible to choose between the two leads in “Love Is Strange”; they’re both wonderful, and with any justice both will be considered for year-end awards. You can’t really call John Lithgow an underappreciated actor at this point, after five Emmys, two Tonys, a pair of Oscar nominations and a long career in theater, movies and TV. But I think he’s gotten better and better. In Lithgow’s younger years he was best known for amped-up or ultra-deadpan comedy, but Ben is a supremely understated character – vague and shaggy, a bit too drunk and a bit too chatty – who gradually works his way into your heart and won’t leave. Molina, on the other hand, probably is underappreciated in America, partly because he’s one of those actors who loves to work and isn’t picky. Amid all the animated voice-over roles and TV bit parts, he occasionally shows up in something like “An Education” (as Carey Mulligan’s dad) or Kenneth Branagh’s 2006 “As You Like It” (as Touchstone) where you see how good he really is. He gives a towering performance here as George, the brooding intellectual of the couple, an introspective Englishman not overly given to sharing his innermost thoughts.

I don’t think Sachs would claim that upper-middle-class homelessness is a burning issue of our time, but it’s a real phenomenon for people in later life who suddenly lose their income in a city like New York, which for 30 years has been shoving creative types out toward the periphery to replace them with yet more bankers and corporate drones. Forced to sell their co-op apartment, and not quite able to scrape together the cash to buy or rent another, George and Ben wind up separated and couch-surfing, at retirement age. They blanch at moving in with Ben’s terrifying New Age niece (Christina Kirk), who owns a large house upstate, and it may not just be about the long commute to museums and symphonies. George moves in with a rowdy pair of gay cops (Cheyenne Jackson and Manny Perez), whose apartment features a rotating case of boozy partyers, small children and Dungeons & Dragons players. Ben winds up on the bottom deck of an Ikea bunk bed, below his aforementioned hot-tempered great-nephew.

All this takes a while to come into focus, to be honest. I would argue that the true subject of “Love Is Strange” is the way Ben and George, even faced with an upsetting and unexpected life crisis, can still serve as mentors and role models to all the younger people around them, even when the younger people barely notice them, or find them irritating. It isn’t always, or even usually, the big moments that change our lives, the ones we consciously pay attention to as they happen. For me, the entire film hinges on a scene when George listens to a young female student play a Chopin nocturne. She plays it once, he offers some critical feedback, and she plays it again. We can tell from George’s response that he has been captured by the music and goes through his own private reflection, his own transports of joy or grief. We never know what he’s feeling and thinking, but in the most important sense we don’t need to – what Chopin’s music, and Sachs’ film, is making us feel and think is what matters.

There are many kinds of narrative resolution that a more conventional kind of movie would offer that Sachs simply doesn’t care about. How do George’s students, and their parents, react to his abrupt dismissal? We never find out; Sachs briefly feints in the direction of a righteous campaign and then drops it. Ben’s presence in Elliot and Kate’s home provokes a family crisis, involving a minor crime that Joey may have committed. We never learn exactly how that ends up either. Ben and George’s housing crisis is solved through a random encounter with a stranger on that sofa in the cops' house, and if you think that’s an unlikely twist you’ve never lived in New York. A major plot development, one of the biggest imaginable, is skipped over entirely and delivered in passing during the penultimate scene. But what I’m arguing is that everything you need to understand is there in the electrifying final images – special credit belongs to cinematographer Christos Voudouris and editors Affonso Gonçalves and Michael Taylor – all the love and grief and faith and hopefulness that make this seemingly slow, quiet and amiable film into something close to a masterwork.

”Love Is Strange” is now playing in New York and Los Angeles, with wider national release to follow.