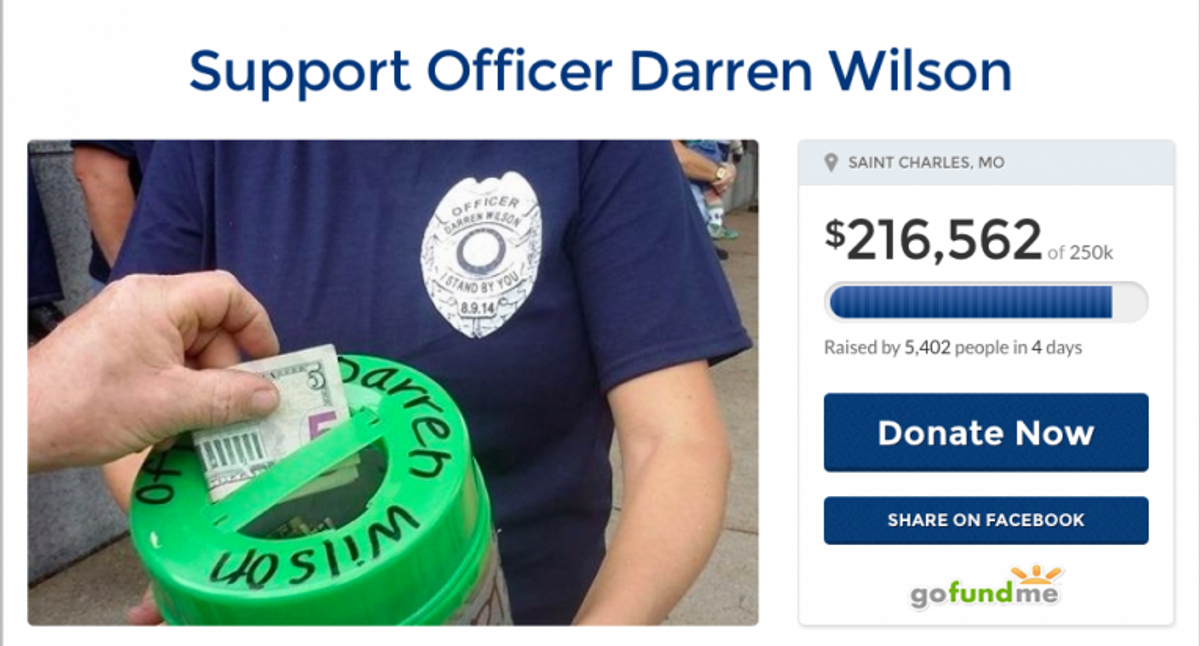 While the truth of what actually happened on Aug. 9 remains hazy, for now, even Wilson is entitled to a legal defense fund by those who are willing to support him. However, perhaps expectedly, the campaign has become a platform for the spread of hate speech and racism.

According to Shaun King, a community organizer in Ferguson who has been an outspoken critic of the campaign, donations are made with explicitly racist and hateful comments attached, and while GoFundMe has chosen to delete the offensive comments, it still collects the attached donations. One comment above is from a user named Jim Crow who writes, "I would have donated double this amount, but you missed his accomplice." Another is from a user calling himself Michael Brown who writes, "I want to apologize to Darren Wilson and the people of Ferguson for my bad behavior. I was a thug and would have taken a bullet sooner or later, most likely from one of my peers or someone defending themselves from violence I instigated again [sic] them. All Darren Wilson was save [sic] the community a lot of trouble. I hope to become a peaceful butterfly when I am reincarnated. Though the guys up here in limbo with me say I'll likely become a cockroach or parasite of some sort."

King also alerted his followers to a 4chan posting that states the goals of the group that hijacked the Wilson page. While 4chan deleted the post almost immediately, King's followers managed to take a screenshot before that happened.

PHASE 2, INTENSIFY THE HATE,/POL/ACKS!
THE STORY:
/pol/ack discovered gofundme campaign called ‘Support Officer Wilson’ & ignited a fire. Donations for evil, white supremacist childkiller nazi Wilson soon surpassed the amount that was raised for Mike ‘Jesus’ Brown. SJWs butthurt like never before, image related. /pol/ having the time of it’s life, nearly drowning in libtard tears since then. Late to the party? View image related. Massive keks guaranteed.
THE PLAN:
Cause as much butthurt as possible. This will cause news agencies & SJWs to spread the campaign like n*ggers spread Ebola in Africa, making it known far and wide. All their hate will result in pro-Wilson folks hearing about it & donating money, causing even more SJW ass-pain, which is our ultimate goal.
SO SPREAD THE WORD, USE EVERY DISTRIBUTION CHANNEL YOU HAVE ACCESS TO

GoFundMe is free to use, but deducts 8 percent from each donation for processing and usage fees. That means that for each comment, hateful or otherwise, GoFundMe is pocketing money.