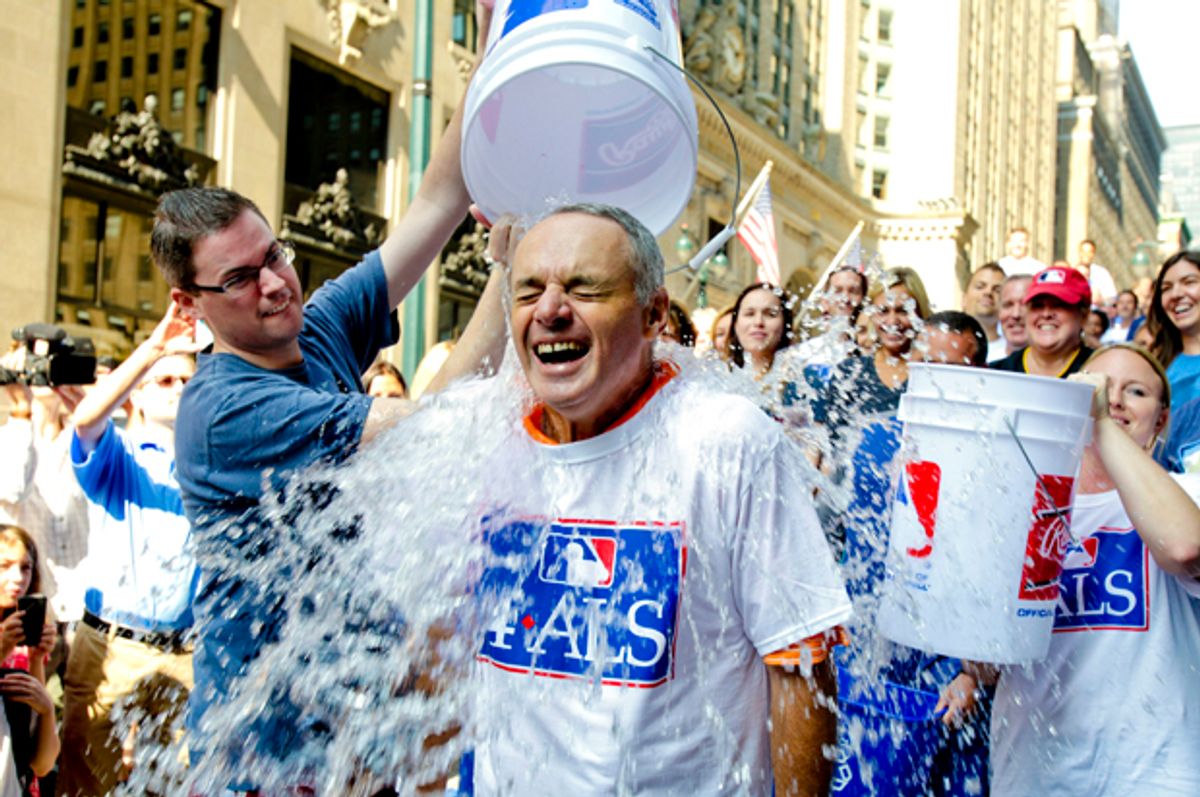 Because life is precious and human dignity needs to be respected, of course now anti-choice groups are now coming down on the Ice Bucket Challenge.

There are plenty of legitimate reasons to question the unlikely philanthropic viral sensation of the summer -- from its gimmicky premise to the way it overshadows our own government's slashing of medical research funding -- but it's hard to argue with the more than $13 million raised for ALS so far, or the awareness the stunt has raised for the vicious and so far incurable degenerative disease. But the story has taken a new twist as religious groups are now beginning to discourage followers from participating -- because ALS research at times relies on embryonic stem cells.

This week, the Archdiocese of Cincinnati specifically asked Catholic school leaders at 113 schools to "immediately cease" any fundraising plans connected to the challenge, because the ALS Association funds at least one study using embryonic stem cells -- "in direct conflict with Catholic teaching." Speaking to Religion News Service Tuesday, ALS Association representative Carrie Munk said, "Currently, The Association is funding one study using embryonic stem cells (ESC), and the stem cell line was established many years ago under ethical guidelines set by the National Institute of Neurological Disorders and Stroke (NINDS); this research is funded by one specific donor, who is committed to this area of research. The project is in its final phase and will come to an end very soon." She added that donors "can stipulate where their money goes and can ask that it not pay for embryonic stem cell research."

But that's still not acceptable to some. Archdiocese spokesman Dan Andriacco explained to Cincinnati.com Thursday that "We appreciate the compassion that has caused so many people to engage in this," Andriacco said. "But it's a well established moral principle that a good end is not enough. The means to that ends must be morally licit." The Archdiocese suggests people who want to do the challenge contribute to the John Paul II Medical Research Institute, "where the research is only conducted using adult stem cells." Similarly, Father Michael Duffy, in a post for Patheos, wrote earlier this month, "While I can’t donate to the ALS Association, I will certainly pray for those that suffer from this disease. I’ll also be on the lookout for a charity that doesn’t violate the Sanctity of Human Life." And LifeNews this week warned that "If you give to the ALS Association your money may end up supporting clinical trials that use aborted fetal cells." The reference is likely to a four-year-old clinical trial involving eight-week-old fetal tissue "taken from a single source of spinal cord cells: cells that were extracted from fetal tissue, which was donated." The provenance of the source has not been disclosed, but the results of the FDA approved trial were reported last year as "extraordinary." Fetal tissue research has existed in the U.S. for decades. Early polio research included the use of embryonic tissue. The chickenpox, rubella, hepatitis A, shingles and one rabies vaccine all derive from fetal embryo fibroblast cells cultivated in the 1960s -- and Catholic leadership has wrestled with the ethics of using those vaccines.

Not all religious leaders are opposed to the Ice Bucket Challenge. Don Clemmer of the U.S. Conference of Catholic Bishops has called the Cincinnati decision "a local matter," and the National Catholics Bioethics Center plans to issue its own statement on "the moral controversy that has arisen" soon.  And evangelical pastor Greg Laurie and Texas megachurch pastor T.D. Jakes have jumped in, as has Catholic Paul Ryan.

Researchers investigating many other conditions, including Parkinson's, also have been known to use embryonic stem cells. The National Institutes of Health notes that embryonic stem cells are derived from donors and created in vitro – and "not derived from eggs fertilized in a woman's body." And the ALS Association, while acknowledging that stem cell research raises "a great deal of ethical questions" also calls it "a major medical breakthrough."

Medical research almost always inspires moral questions, and those questions need to be asked and debated. There are also plenty of reasons to opt out of the ice bucket challenge and choose to put one's time and money somewhere else; there are reasons to have conversations about embryonic stem cell research and fetal tissue research. But ignorance helps no one, and if you're going to take a stand on an issue, at least do your own soul searching and get the facts straight first.