"I can get really angry about it": Meet the Dem taking on Joe Barton and his own party

Democrat hoping to unseat Big Oil's favorite Republican on how he's fighting, despite opposition from Dems in D.C. 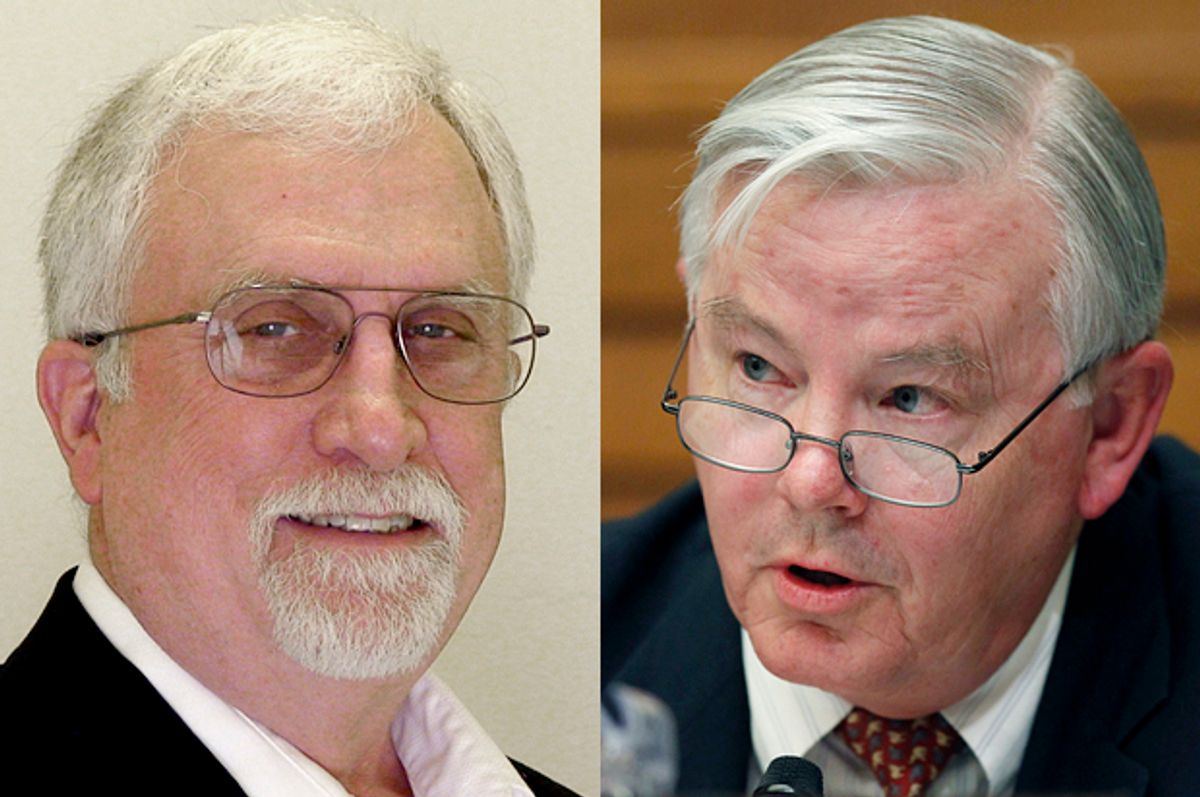 Even within a majority that is responsible for what's been called the most anti-environment Congress in U.S. history, Texas Rep. Joe Barton stands out for his inflexible opposition to any legislation that goes against fossil fuel industry interests. And while most Americans who remember him at all would likely do so because of his embarrassing apology to BP in the wake of 2010's massive Gulf of Mexico oil spill — another all-time low in American history — the truth is that Barton's apology was far more representative of his career than his subsequent retraction.

Yet despite committing such a high-profile blunder on an issue that most Americans, regardless of their partisan affiliation, considered a disgrace, Joe Barton, like so many other members of Congress, never had to worry about losing in the general election for his gerrymandered district. In both 2010 and 2012, Barton won reelection with well over 55 percent of the vote. His seat in Congress may not be quite as comfy as his seat on the House Energy and Commerce Committee, but it's damn close.

Hoping to understand how such a seemingly vulnerable and accident-prone congressman can not only repeatedly win reelection (this is Texas, after all) but do so with such ease, Salon spoke with David Cozad, the Democrat who ran against Barton in 2010 and is doing so again in 2014. We touched on why Cozad is taking on Barton once again, when he expects Barton to finally leave Congress, and how Cozad is doing it all without the help of the Democratic Party on almost any level. Our conversation is below, and has been edited for clarity and length.

Running for Congress is a brutal, exhausting project — even if you're not a Democrat in Texas going up against a longtime incumbent. So why do it?

Well, basically, the way I got to run was that I had a friend of mine who was planning on running but he’s a guy that’s an old veteran from Vietnam [who got] pretty badly beat up. He calls me up and says, “I can’t run.” Since we had a gentleman’s agreement that one of us was going to run, I suddenly became the candidate. Bad news is that was in November and not sometime like April of last year, so I found out that the campaign he had put together was more of a paper campaign than anything else and I had to start building a campaign almost from scratch.

How much support have you received from the Democratic Congressional Campaign Committee? What's that relationship been like?

What I found out as a candidate when I ran four years ago is that the DCCC has a set of criteria before they even acknowledge that you’re a campaign. Now in 2010, you had to have $250,000 in your campaign fund when you filed; if you didn't have $250,000, they didn't consider you a viable campaign. Otherwise, you’re guaranteed to lose and they’re gonna make sure you do lose, is the philosophy. They give no support, they don’t even acknowledge you exist. Now, if you have that $250,000 — nowadays it’s $300,000 — then they acknowledge you and that you exist. They say you’re a viable campaign; and they might even come down with somebody that says: “Here’s how we can help you.”

The reason why the DCCC does this is because they do not have unlimited funds and unlimited people to support campaigns. So they make an arbitrary line and it increases each year. If you have that kind of money, more than likely you can run a pretty good campaign and have a chance to win. If you don’t have that kind of money, this is just a hobby [for you] in their eyes. And you’re just out there ... so that you can put something in your obituary about how you ran for Congress, and that’s all it really is. That’s how they look at it. It sort of evolved out of decades of campaigns and analysis and that kind of stuff. It’s a bit harsh for those of us that don’t have $300,000, but that’s the way of survival. ... Since I didn’t have $300,000, the short answer is, I’m not considered to be a viable campaign and I will not get any support from the DCCC.

Republicans have a tendency to shoot themselves in the foot. And Joe Barton, my opponent, is an excellent example of that. During my last campaign, he did his little apology to the CEO of BP and we got a surge of money. The only problem was, because we didn’t have a whole lot of people, we couldn’t take full advantage of it. But what really hurt was the DCCC came out with a video and stole our thunder, because they had the money, they could turn it around very fast. I was going to have my video out — this was about 1 or 2 o'clock in the afternoon — and a staffer says, “We have a problem.” Sure enough, there was a video by the DCCC taking advantage of Joe’s little gaffe, and all the money I was hoping to get went to them instead. I had a professional fundraiser who said that run was probably worth a quarter of a million dollars. I got about $6,000 of it and the DCCC got the rest.

Does this make you angry or do you feel like the people involved on the national and state level are making decisions in reaction to forces they can't control?

Every once in a while I can get really angry about it. But ... I was an Army brat (my dad was 32 years Army) so you get kind of used to finding out that the higher-ups are ready to — they say, "You’re going to be the guys that have to make the charge against the enemy!” They select your unit to do it; you go do it. You don’t really get angry about it. You might get despondent or depressed even, but you suck it up, lift up your chin, puff up your chest, pull out all those nice little military traditions, tell everybody “We’re Marines!” and go charge the hill when we’re told to. And then we go do it. We may get killed, but we’re going to go do it. That kind of background for me translates directly into this situation.

Isn't that amount of money more or less what the DCCC requires in order to take a campaign seriously?

That’s right ... I had to have a quarter-million when I filed back in December of the previous year. I didn’t have it then. That meant I was not a viable campaign and, to their mind, that meant they could take whatever they wanted. They didn't even have to acknowledge I existed. They didn't even have to tell people I existed. ... I had one guy give me $500 and he said, “I couldn’t believe how hard it was to find you. The DCCC didn’t even want to say that you existed.” ... The one way people found me was usually if they went online to the Texas Democratic Party [website] because the Texas Democratic Party, under its rules, has to list me as a candidate with my campaign contact information. So that’s how most of those people who donated found me.

The analogy you used a bit ago, about how a good soldier does what he's told — it occurs to me that the DCCC sounds like it's acting as much like your enemy as your commander. On a fundamental level, do you feel the DCCC is with you or against you?

It depends on the situation. ... They are basically a force of nature, is the way I look at it. If you stand out there and see a tornado coming, you get down in your storm shelter or find someplace to shelter up and you hope it misses you.

To turn to your chief opponent for a moment: Is Joe Barton especially bad on the issues you care about, or is he more or less just a warm body, and if it wasn't him in that seat, representing your district, it would be somebody else just like him?

If Joe Barton was living down the street, a normal neighbor, I’d probably like the guy — or at least tolerate him. I have some bad neighbors here and I’ve got good ones; he’d probably be one of the tolerable neighbors. But he’s not my neighbor. He’s my congressman, and my requirements for a congressman are a whole lot higher than they are for a neighbor.

Joe is failing on almost every stroke. Joe is one of those people who has ... drunk the Kool-Aid that the oil industry has put in front of him. And he’s still drinking it. He does not know how to drink anything else. He is locked into them, money-wise. He is totally dependent upon them for almost everything to keep him in office. So he does what they tell him, and he does it without ever thinking about it. He is incapable of looking forward into the future; Joe exists in the now. I got a dog laying on my bed right now. She’s a beagle. She lives in the now. She can’t think further ahead than the next meal. Joe can’t think past the next donation. He’s got a team of people that are very good at making sure he stays in office, so he can continue to feed them their bonuses. ... [T]here is no forward thinking, except the next election. That’s it. He just has to figure out who his opponent is and how to out-maneuver them.

Joe is not a stupid man. He's arrogant as hell, but not stupid. He just doesn’t have the vision thing ... Well, that’s the same thing you get from most Republicans. They don’t have the vision thing. Forward vision is nearly impossible for them. They got a lot of back vision. They look back over their shoulder a lot and they think that whatever happened in the past is what they’ll be doing in the future. What it comes down to is Joe’s going to stay in office until he has another heart attack and it kills him or somebody like me comes up and figures out a strategy to take him out of office.