Only a true star can keep our attention as well as Miley did, with a stunt both goofily earnest and canny 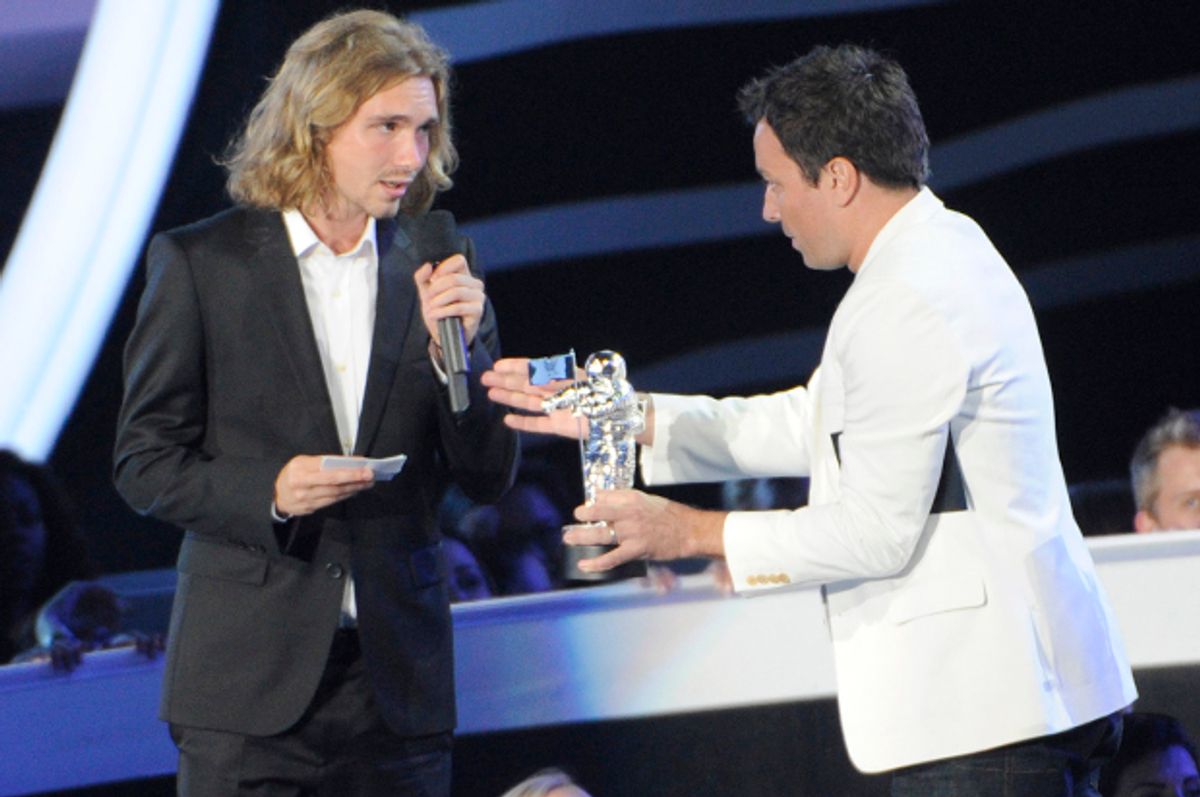 Jesse accepts the award for Video of the Year from Jimmy Fallon on behalf of Miley Cyrus at the MTV Video Music Awards, Aug. 24, 2014. (AP/Chris Pizzello)
--

It's hard to contest that "Wrecking Ball" -- Miley Cyrus' music video in which she, nude, straddled the titular destruction implement -- deserved the award it won from MTV last night, the VMA for video of the year. "Wrecking Ball" was, if not qualitatively "best," certainly "most" in terms of sheer spectacle. Cyrus' taste for empty-calorie provocation continued at last night's VMA ceremony, in which, without saying a word, she stole the show.

Cyrus had a model-handsome young man named Jesse accept the award on her behalf -- or, rather, "on behalf of the 1.6 million runaways and homeless youth in the United States who are starving, lost and scared for their lives right now." He was at once arresting -- he spoke about stark realities and was, it is worth reiterating, so stunning that on his walk to the stage one wondered what boy-band member Cyrus had begun dating -- and a bit hard to follow. Were his references to working as a movie extra proof of the world's indignities, gratitude for the job, or just ... there?

The whole thing was uncharacteristically serious for a ceremony that, only the year before, had allowed Cyrus to win several news cycles by dancing in a flesh-tone bikini; no one knew how to act. Breathless presenter Jimmy Fallon, for reasons known only to him, reached into the shot to hold Jesse's microphone, so that he could be seen to do something. In the audience, Katy Perry's evolving facial expression, from giddy interest to curiosity to just blinking slowly, revealed that something had gone seriously awry. Can you blame them? The ceremony had, until then, been an utter mess, with various try-hard stars attempting to get the kind of press Cyrus had gotten last year. The only person who seemed to get it was Cyrus herself, who, perched gracefully on a riser in the audience, wiped her tears in a manner both (apparently) deeply felt and utterly showy.

That combination -- both sincere sentiment and capitalization on a moment to boost Cyrus' own status -- continued on through Jesse's final moments onstage, when he urged viewers to find out how to combat homelessness by logging onto Cyrus' Facebook page. (There, fans can see a video in which Cyrus endorses Hollywood homeless center My Friend's Place.) What's a charitable call to arms, after all, without the chance to nab a few new followers? It was a perfect summation of what it is to be a charitable star in 2014 -- vague statements toward a nebulous goal of ending some universally agreed upon problem, with an appeal to learn more by deepening one's fandom. Jesse's final statement, that "a dream we dream together is reality," seemed to echo Jared Leto's Oscar-speech shout-out to "the dreamers [...] in places like the Ukraine and Venezuela," and that was no mistake. It was deeply felt and, in the moment, purposeless, an easy thing to applaud that, in the moment, meant little more than itself.

Many hours have been wasted, among pop music fans, trying to determine who is the next Madonna, or if such a hierarchy is even possible today. But even as Beyoncé closed the VMAs with a very long performance of her most recent material and then embraced her husband and daughter, it was Cyrus' stunt that resonated as the pure essence of celebrity, the most honest expression of every celebrity's desire to be sainted. For the second consecutive year, Cyrus has won the VMAs, this time by staying silent as everyone around her tried to ape her last move.