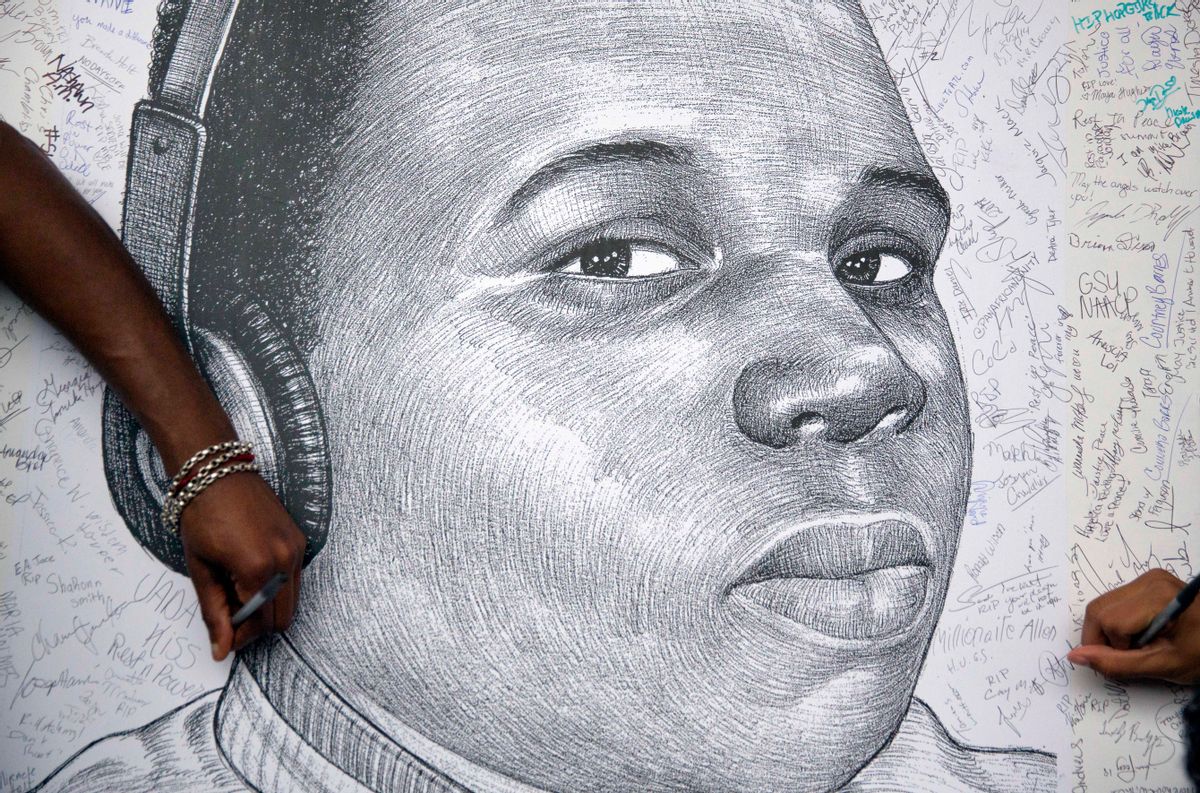 In a Monday, Aug. 18, 2014 file photo, protestors autograph a sketch of Michael Brown during a protest, in Atlanta. Michael Brown Jr. was on the verge of starting college, eager to launch himself into the adult world. Instead, on Monday hell be mourned at his funeral, more than two weeks after his fatal shooting by a white police officer. (AP/David Goldman)
--

On Sunday, the New York Times published what was a generally poignant piece about Michael Brown, the teenager who was gunned down by police officer Darren Wilson in Ferguson, Missouri. Reporter John Eligon wrote eloquently of Brown's introspective final weeks struggling with religion and the meaning of life. However, the generally respectful article has unwittingly demonstrated the media's unconscious bias.

Michael Brown, 18, due to be buried on Monday, was no angel, with public records and interviews with friends and family revealing both problems and promise in his young life. Shortly before his encounter with Officer Wilson, the police say he was caught on a security camera stealing a box of cigars, pushing the clerk of a convenience store into a display case. He lived in a community that had rough patches, and he dabbled in drugs and alcohol. He had taken to rapping in recent months, producing lyrics that were by turns contemplative and vulgar. He got into at least one scuffle with a neighbor.

In an article that purports to be about the spiritual curiosity of a doomed teen, why is it necessary to hedge the writer's argument with harmless details of his allegedly fraught youth? Because certain media outlets have aggressively spread certain details of Brown's life, it seems that every news outlet needs to include details of Brown's drug use and petty theft (which are normal teenage offenses) in order to remain "objective." In reality, the inclusion of these details represents the public will to say that maybe, just maybe, Brown's fate was unavoidable. Expectedly, people have taken to Twitter to express their outrage at the piece, zeroing in on the phrase "was no angel."

The trend was perfectly illustrated by Matt Bors' comic:

Margaret Sullivan, the New York Times' public editor has written a response to the outcry in which she calls the choice of words a "regrettable mistake," because it suggests that Brown as "altogether, a bad kid." Eligon told her he, too, regretted the choice of words. "I understand the concerns, and I get it," he said. "Hindsight is 20/20. I wish I would have changed that."

Sullivan also spoke with the Times' national editor, Alison Mitchell who said, "If you read the full, profile, it's a sensitive, nuanced account of this young man. There was certainly no hint that this poor young man should have been shot."