Al Sharpton does not have my ear: Why we need new black leadership now 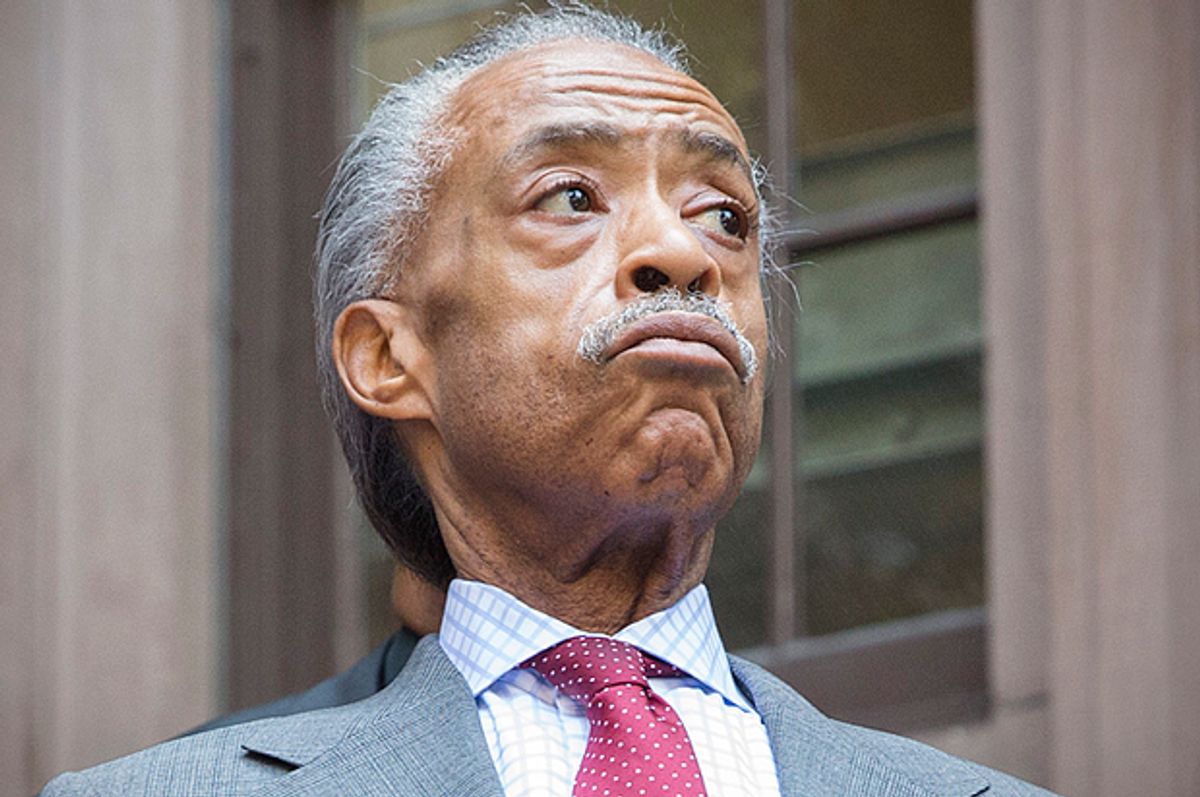 Racial politics in the U.S. is beholden to the space of black death. On Monday, Michael Brown’s family, friends and loved ones gathered to lay his body to rest, even though his unjust and untimely death leaves his community of Ferguson, Missouri, in a state of unrest.

Michael’s funeral, held in a local black Baptist Church, was reminiscent of so many familiar rituals of black cultural home-goings: raucous preaching, the call and response of the audience emboldening those in the pulpit to “make it plain,” and “tell it all,” while the truths being affirmed received “hearty amens.”

Black churches are a central part of the 20th century story of American racial politics. Dr. King was the consummate preacher, flanked by peers like Rev. Ralph Abernathy and Rev. Joseph Lowery, and protégés like Rev. Jesse Jackson. Last century, black churches were the locus of a kind of narrative authority in black communities – the way black preachers, mostly male, told our story to us in light of the story of Jesus Christ gave us hope, inspired change and helped us to make sense of black suffering, to believe that God had a grander purpose in the sure and steady sacrifice of black bodies, namely the fashioning of a better, more just America.

It is within that context, that of the black church and its relationship to black politics, that we have come over the last three decades to know the person of Rev. Al Sharpton.

In his sermonic remarks at Michael’s funeral yesterday, Sharpton tried to assume the mantle of black America’s spiritual leader, the one with the moral and rhetorical force to move us toward thinking of Mike’s death as the beginning of a movement, rather than merely a moment.

Al Sharpton, however, does not have the ear of this generation, and it is not his leadership that any of us who will live on the planet for the next half-century or so really needs. To be clear, I do not believe in the slaying of elders. Black cultural traditions hold within them a serious reverence for the authority and wisdom of elder people.

This is not about Sharpton’s age, but rather about how he has positioned himself in relationship to black politics. My issue with him resides squarely within the limitations of his moral and political vision for who and how black people get to be within the American body politic.

Those limitations emerged almost immediately in his sermonic remarks as he stood in a pulpit over Mike Brown’s casket. Unable to resist shaking a finger at “looters and rioters,” he told them “this is not about you. This is about justice.”  Justice apparently is not about us. Taking a page from the standard conservative black preacher playbook, he goes on to rail against a black community that mistakenly thinks the “definition of blackness” is “about how low you could go.” Among these misguided black people, there is the apparent sense that “it ain’t black no more to be successful.” Thus he concludes, that “we have to clean up our community so we can clean up the United States of America.” We have to do this because, “nobody is going to help us if we don’t help ourselves.” Thus, we must quickly dispense with our penchant for “ghetto pity parties.”

To quote Philip Agnew of the Dream Defenders, when asked recently about the helpfulness of clergy to the work in Ferguson, some of the clergy have been “problematic.” Problematic is putting it mildly. Sharpton’s words should certainly put to rest those critics who suggest that black people are never outraged about “black-on-black crime” and the ills that plague black communities. These sermonic turns of phrase rise to the level of cliché when set against any number of sermons preached from black pulpits on Sunday mornings.

The idea that black communities can be saved through self-help is an idea that emerged during the immediate moment following Reconstruction, when Northerners and the federal government, weary of helping black people get on their feet after centuries of slavery and tired of being at odds with their white Southern brethren, abdicated all sense of responsibility to fledgling, newly freed black communities. In response to this massive depletion of government resources, black communities turned inward, touting a politics of respectability, hoping that if they merely “acted better” and “more fit,” the nation would accept them.

For nearly 140 years now, we have repeated this mantra of “self-help,” stopping only in limited instances to question whether in fact it is we who are the problem. But Sharpton’s remarks, his own call for us to finally deal with the problem of militarized and racist policing of black communities, suggests that we are not in fact the problem.

His remarks did not meet a contradiction they did not embrace. While demanding that Mike Brown’s death be a turning point for the nation, Sharpton also suggested that the real turning point needed to be first within black communities. That kind of argument is deeply dishonest, and places Sharpton adjacent to more robust traditions of prophetic leadership in the black church that have called the nation to account for failing to meet its stated democratic ideals.

If the U.S. would “clean up its act,” this would necessarily mean a real commitment to due process, protection of voting rights, a livable wage, the dissolution of the prison industrial complex, funding of good public education at both K-12 and college levels, a serious commitment to affirmative action, food security and full reproductive justice for all women. Those are the kinds of conditions under which black communities, and all communities, could thrive. That kind of commitment to the ideals of democracy would require us, as my friend activist Marlon Peterson did recently, to “ask not what you can do for your country. Ask what your country can undo for you.”

These young people, some more militant than others, some whose understandable nihilism and “don’t give a f___” attitudes show up as militancy, are looking for leaders with the courage to tell the truth.

The inconvenient truth is that the continued machinations of racism and its devastating and traumatizing impact upon communities of color will be the undoing of our country. Sharpton stuck to safe truths, convenient ones, about the problem of militarized policing, particularly in black communities.  Sharpton chose not to be a prophetic voice for the people of Ferguson but rather to do the work that the Obama administration sent him to do. That work entailed the placating of the people by ostensibly affirming their sense of injustice, while disaffirming their right to a kind of righteous rage in the face of such injustice. If the nation does not believe in and protect its people, we should not be surprised when the people no longer believe the idea of the nation itself. Absent strong federal intervention, this is exactly what should and will happen.

A recent New York Times poll found that 20 percent of African-Americans disapprove of Obama’s anemic response to the crisis in Ferguson. That disapproval rating is incredibly high when you consider that the president’s approval rating in black communities usually hovers at or above 90 percent. While Eric Holder’s presence and the Department of Justice’s civil rights investigation are welcome, a visit from the president would be, too.  Nobody is trying to hear excuses about the separation of powers. The civil rights that African-Americans have enjoyed for fleeting moments across the centuries are a direct result of strong federal action, often in the face of obstructionists wagging fingers about the infringement upon “states’ rights.”

The kind of anemic truth-telling in which Sharpton trafficked will also be the undoing of mainstream black churches. Their heavily male leadership, their refusal to blend real political critique with substantive theology, and the investment of black male preachers in being both figureheads of the movement and friends of those with political power rather than fighters for real change run the risk of rendering the black church an institution increasingly irrelevant to 21st century political change.

The optics of the heavily black male preachers and preachers-by-proxy including Sharpton, T.D. Jakes and Martin Luther King III, who showed up and had a front row seat at the funeral, suggest that this is exactly the kind of outdated model that we are being asked to invest in again. Jesse Jackson, who had been the subject of vitriol early last week, sat a few rows back in the audience, clearly dethroned from a place of either honor or leadership or relevance.

It is easy in times like these to suggest that there is a crisis in black leadership, to pathologize black people further by suggesting that we do not have the political acumen to figure out the right direction in which to head. But as I speak to activists on the ground and prepare to ride this weekend to Ferguson with people from across the country, I believe we should give the emerging leadership credit for, at the very least, knowing what kind of leaders they do not want.

They are not invested in leaders who emerge from churches using Christian theology to placate them, to “pray over them and send them home at the end of each night” as Philip Agnew noted. Churches, like Greater St. Mark’s Church, that act as gathering spaces and treatment spaces for organizers and tear gas victims, seem to be acceptable. But “the church” as the arbiter of the narrative of this moment and any emerging movement has been abandoned as the leadership model for this generation.

This generation of people has grown up with the dethroned gods of Generation X and the failures of political courage that have marked the Hip-Hop Generation. The most faith they have, hubristic though it may turn out to be, is in themselves to be agents of change. But they will not invest in a nation-state project that hands them black presidents alongside dead unarmed black boys in the street. These are irreconcilable contradictions. And these are non-conciliatory times.