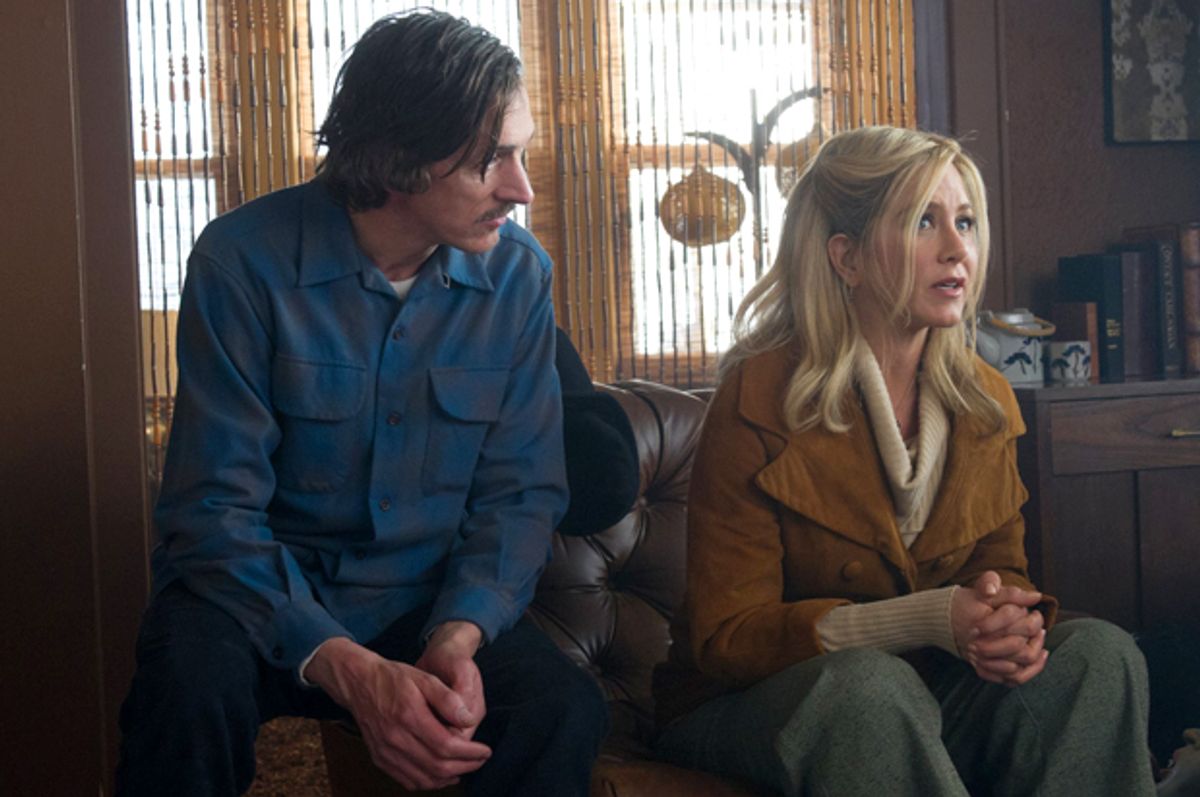 I’m tempted to tell you that “Life of Crime” is the best Quentin Tarantino movie since “Jackie Brown.” Of course that’s not fair, and I’m not just talking about the fact that Tarantino didn’t have anything to do with making this film (except maybe in a spectral or spiritual sense). But it does give you a decent sense where writer-director Daniel Schechter is going with this adaptation of Elmore Leonard’s “The Switch,” a farcical tale of kidnapping, extortion, 1970s race relations and general stupidity. With the genial pairing of Jennifer Aniston as a rich guy’s trophy wife and John Hawkes as a low-rent criminal at the center of a colorful cast and a pitch-perfect rendering of caste-divided Detroit, “Life of Crime” is a bittersweet end-of-summer surprise. (By an odd coincidence, Aniston has already appeared in a movie called "The Switch," so that title was not available.)

I can understand exactly why this is being pitched onto the marketplace at the end of August, which is pretty much the movie-world equivalent of dumping your baby at the police station. I found “Life of Crime” pretty doggone funny, but the humor is understated and undercut with notes of brutality and nihilism. Schechter sticks closely to Leonard’s story and imports swatches of his dialogue intact, which means that none of the characters is entirely honorable – or entirely odious, with the possible exception of Tim Robbins as golf-playing, philandering and corrupt real-estate tycoon Frank Dawson. Aniston, who plays Frank’s over-coiffed younger wife, Mickey, is a pretty long way from her plucky rom-com heroines here. She actually delivers a quiet and delicate performance as a woman forced by a bizarre set of circumstances to confront the existential ruin of her life. But Mickey isn’t really the protagonist of this movie, and it’s also possible that the scene in which she is almost raped by a hirsute and obese neo-Nazi didn’t strike preview audiences as amusing.

I’m not suggesting that you should find such a scene hilarious and that you’re a humorless leftist if you don’t, for the record. I’m saying that Schechter has done an admirable job of capturing Leonard’s mode of American grotesque, which often deliberately pushes beyond the bounds of good taste or liberal sensitivity. And when it comes to entering Leonard's world, you're either in or you're out. The aforementioned neo-Nazi pervert, Richard (Mark Boone Junior), is good friends with an African-American hustler called Ordell (Yasiin Bey, aka Mos Def), in defiance of Richard’s avowed beliefs on race relations. As Ordell cheerfully explains to Louis, Hawkes’ character, Richard likes Diahann Carroll, but generally thinks that most black people – “the ones on welfare, the ones sittin’ around not doin’ shit” – should go back to Africa. This conversation, as you may imagine, employs an old-fashioned colloquial term for black people.

Ordell and Louis, for their part, comprise that beloved 1970s combo designed to display the egalitarian nature of crime: the salt-and-pepper pair of lowlifes. Louis is in most respects the hero of “Life of Crime”; he’s a soulful-eyed Vietnam vet (or so we assume), with a good heart, a core of decency and a cultural memory that extends to a more innocent period in Motor City history. But there’s no avoiding the fact that Louis is also a criminal deadbeat who embraces Ordell’s scheme to kidnap Mickey in hopes of a million-dollar ransom from Frank. (Ordell has a contact in the Bahamas who’s been feeding him info on Frank’s secret bank account, filled with the proceeds of a Detroit real-estate scam.) As for Ordell, he might be my favorite of this movie’s rogues, a sly, intelligent charmer with a core of total ruthlessness. Both as a rapper and an actor, Bey is a mercurial figure (his recent name change is not the first) who evidently does not need movie-star status but could probably reach it. He draws your attention whenever he’s on-screen, and also captures Ordell with considerable subtlety, as a guy who’s both irresistible and untrustworthy.

It may not surprise you to learn that Ordell’s brilliant plan goes off the rails from the start, and not merely because the idea of stashing a beautiful kidnapee in the extra bedroom of a deranged and sex-obsessed white supremacist was flawed to begin with. Ordell knows that Frank is in the Bahamas visiting his secret trove of money, but not that Frank is also visiting a woman called Melanie (the always enjoyable Isla Fisher), a conniving strategist who seizes her opportunity and is ready to match Ordell move for move. He doesn’t know about Marshall (Will Forte), Mickey’s would-be lover, who shows up in the middle of the kidnapping with martinis and seduction on his mind. And Ordell doesn’t know that he and Louis are dragging Mickey out of her capacious suburban home just before the arrival of the divorce papers Frank has filed, like the true class act he is, for delivery while he’s out of town. No, Frank doesn’t want Mickey dead, exactly. But, hey – now that these other two losers have got her, she’s pretty much their problem!

Schechter expends most of his energy on developing this complicated and delightful cast of interlocking characters and the soul-music-infused period atmosphere, rather than on building the slow-simmering romantic possibilities between Louis and Mickey. That’s too bad, because the unfulfilled potential is considerable; if Hawkes and Aniston make a peculiar coupling, they’re not a displeasing one. That failure makes “Life of Crime” fall just a little short of obvious antecedents like Tarantino’s “Jackie Brown” and Steven Soderbergh’s much-beloved “Out of Sight,” which memorably paired George Clooney and Jennifer Lopez in a similar scenario. Those two Leonard adaptations featured potent screen romances and are now remembered as two of the best mainstream American films of the late ‘90s. This one may not have that future trajectory but it’s a worthy successor and an unexpected escape from the Labor Day movie doldrums. If you’ve been pining for more crime movies aimed at an audience of actual adults, here’s evidence that it can still be done.

“Life of Crime” opens this week in limited theatrical release, with wider release to follow. It will also be available on-demand from cable, satellite and online providers, beginning Aug. 29.