Sofia Vergara's spin at the Emmys: A subversive stunt or just a woman on a rotating platform?

Vergara isn't the problem, Hollywood's shameful lack of diversity is. So let's think beyond the pedestal 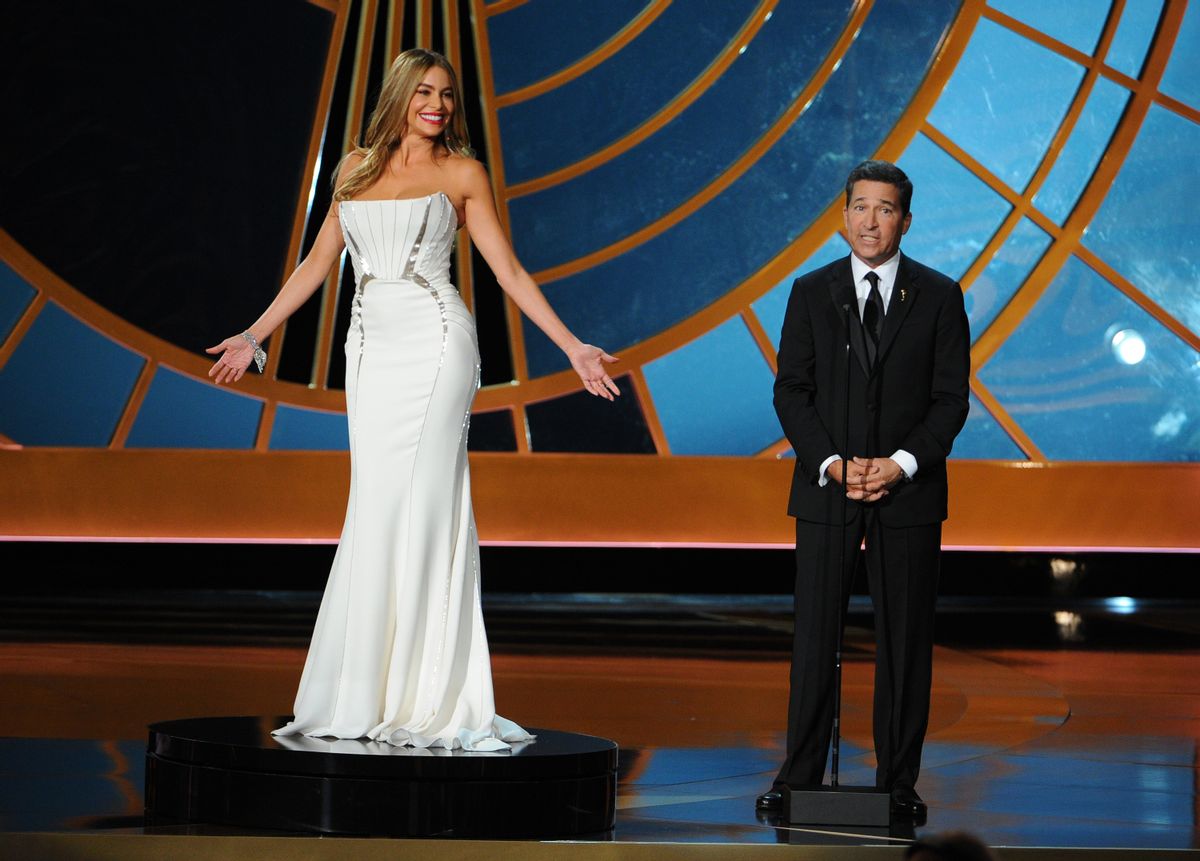 I had a pretty confused reaction as I watched Sofia Vergara rotate on a platform while a white dude no one has ever heard of celebrated how the Academy of Television Arts and Sciences "always" gives audiences "something compelling to watch." First I thought, "Oh man, this is awful. Let's please burn the world." Then I thought, "Oh man, maybe she's being subversive by making literal the kind of objectification that the entire industry, and awards ceremony culture, is premised on." Finally I was like, "Oh man, it is so hard to be a person in the world and life is so confusing so I should probably go to sleep."

So this is perhaps why I spent a lot of time this morning trying to figure out how I feel about Vergara being displayed on a pedestal like a car or, as Janet Mock noted last night on Twitter, like some prize from "The Price is Right."

My initial discomfort with the bit, shared by plenty of others on Twitter and elsewhere, stems mostly from the fact that the film and television industry has a shameful problem with diversity. If you've seen any of this summer's big ticket movies or watched basically anything on television not somehow attached to Shonda Rhimes, you already know how white white white most of the media out for consumption is. And you don't need a study to tell you that the characters played by people of color are often sidekicks or relegated to nonspeaking roles. You don't need a study, but there is one. (Many studies, actually.)

According to a recent survey from the University of Southern California, Latinas like Vergara are particularly underrepresented on screen. As Inkoo Kang at IndieWire wrote at the time the study was released, only "4.9 percent of speaking characters in the years surveyed were Hispanic. Compare that to the 16.3 percent of the US population that is Hispanic -- and the fact that Latino moviegoers buy 25 percent of all theater tickets -- and the numbers are appalling." Latina women are also the most likely to appear partially or fully nude on screen. So in addition to a paucity of opportunities for starring roles in mainstream movies and television, the roles that do exist are often hyper-sexualized bullshit stereotypes.

Vergara's gameness to be objectified in such a glaring way stings hard against this backdrop.

But Vergara gets paid a lot of money to appear on "Modern Family" and sell Pepsi. With money comes control. She has handlers, a PR team and -- most essentially -- a brain of her own when it comes to her image and "brand." As her response to the backlash made clear, she thought the stunt was a good joke -- one that landed. “I think its absolutely the opposite [of sexist],” Vergara said. “It means that somebody can be hot and also be funny and make fun of herself.”

But the satire, if that's what it was, felt weak. If the joke is meant to indict the viewer for turning Vergara into an object by actually presenting her as an object, it could have benefited from some teeth. Let Vergara look bored and disdainful at the people who ogle. Claim some power in the moment, let it be unmistakable that this is a joke about objectification and not, you know, objectification.

But in her comments, Vergara articulated the confusing space between how she perceived the moment versus how many others did. Intent versus reception. A moment in time versus the broader cultural context in which it's happening. Last night, like much of her other performances, Vergara performed a hyper, almost comical version of passive feminine sexuality. But the performance comes in an industry that practically demands this of all women, so the context confuses the subversion, if subversion really was the intent.

So do we foreclose the possibility of subversion because Vergara has not had a Beyoncé public feminist awakening, or do we leave it open because we understand she has agency and said she was in on the joke? Who gets to have the final word in the rush to define that moment? (Answer: Probably no one.)

But where I ultimately land, I suppose, is that Vergara is seemingly not interested in being a political or socially conscious actor (at least not publicly), but that's most of Hollywood. Vergara is doing what a great majority of her famous peers get to do without catching criticism. But she is a woman of color, she is a Latina in an industry with so few Latinas on screen. The assumption, I think, is that we believe she must do better.

I want all women in fields where women are underrepresented or pigeonholed to be righteous feminist warriors who own their sexuality and can, if they so choose, use it as a weapon against the fuckers who want to lock them into being just a beautiful woman on a pedestal. But it's not Vergara's responsibility to meet my expectations for what wealthy celebrity women should do with their platforms. (Or pedestals, as it were.)

The stunt, more than anything, made me resentful of the Emmy writers for being so predictable and lame, it reminded me again of how desperately the industry needs diversity -- more women, more people of color, more LGBTQ people as writers, actors and producers -- so that it can begin accurately mirroring the world it claims to represent. So that Vergara playing the bombshell and rotating on a platform can be a stunt, the joke that she said it was intended to be. One that won't matter so much because so many other women are telling so many other stories that a joke that maybe didn't land just becomes part of the messy and confusing ways that women live their lives.