One thing is clear from Weird Al's performance: He sure doesn't know much about "Mad Men" or "Game of Thrones" 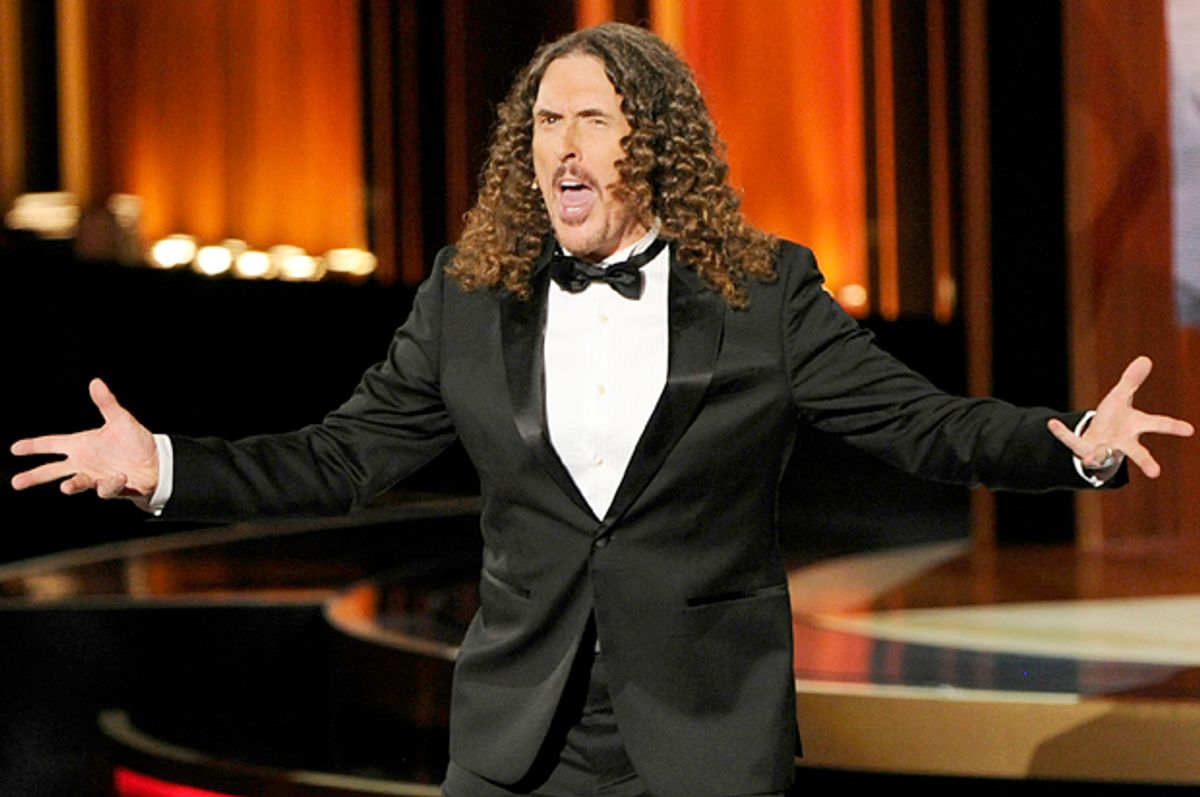 Weird Al’s having a great summer — his new album “Mandatory Fun” debuted at No. 1 on the Billboard Hot 200 and his rapid-fire release last month of eight videos in eight days mocking chart-toppers like Iggy Azalea’s “Fancy” and Pharrell’s “Happy” tapped right into the Internet’s hunger for clever parody music videos, a genre he pretty much perfected in the '80s. So when he arrived halfway through last night’s Emmy Awards to inject some much-needed smart-ass humor into what was otherwise a three-hour layover of recycled Matthew McConaughey jokes, why wouldn’t we be excited?

Finally, some cultural commentary on this show that isn’t Seth Meyers reading a Bloomberg brief about Netflix!  Meyers, playing to his strengths, had wisely sidestepped the hosting temptation to tuck a shifty-eyed, slightly embarrassed song-and-dance number into his opening monologue. Better to leave that to the experts, and who better than Weird Al to perform parody lyrics set to our favorite instrumental show themes? That sound like they were written by someone who’s never watched TV.

Here are Weird Al’s lyrics to the “Mad Men” theme, which are barely a half-step above Nick the Lounge Singer’s “Theme from Star Wars”:

Translation: I watched the pilot eight years ago — can you believe people used to smoke at work?  Hey, Jon Hamm!

Did they book him for this gig in a panic last Friday? Maybe “Mad Men” wouldn’t yield any great zingers, but could they not give him enough time to binge-watch “House of Cards?”

If you follow award show hashtags you see just how many people watch even when they have no clue who’s being honored for what so they can sound reasonably informed at the office the next day. For them, from Weird Al, here is a bit of “Homeland” in brief, in case the boss asks:

And for everyone who mused that they had no idea “Modern Family” was even still on the air, the entirety of Weird Al’s knowledge:

That’s exactly how my great-aunt would describe “Modern Family” if you held a gun to her head and made her bet her pension on the audio Daily Double.

If Weird Al wasn’t up to the job — and who would have guessed he wasn’t? — this would have been a great opportunity to hear Kate Micucci and Riki Lindhome give these shows the Garfunkel and Oates treatment. It’s almost (I said almost) enough to make you wish for someone to storm the stage and say Seth MacFarlane’s name three times, come what may.

At least Al delivered in the closing segment with a fairly on-point send-up of “Game of Thrones,” which also featured, in what was easily the highlight of the evening, Andy Samberg in King Joffrey drag handing George R. R. Martin a typewriter to encourage him to type, George, fast as arrows can fly:

If you miss a big scene watch it back

Hope you paid attention to the map

Don’t get too attached to a certain guy