While attempting to disprove the idea of white privilege, O'Reilly accidentally demonstrates it perfectly 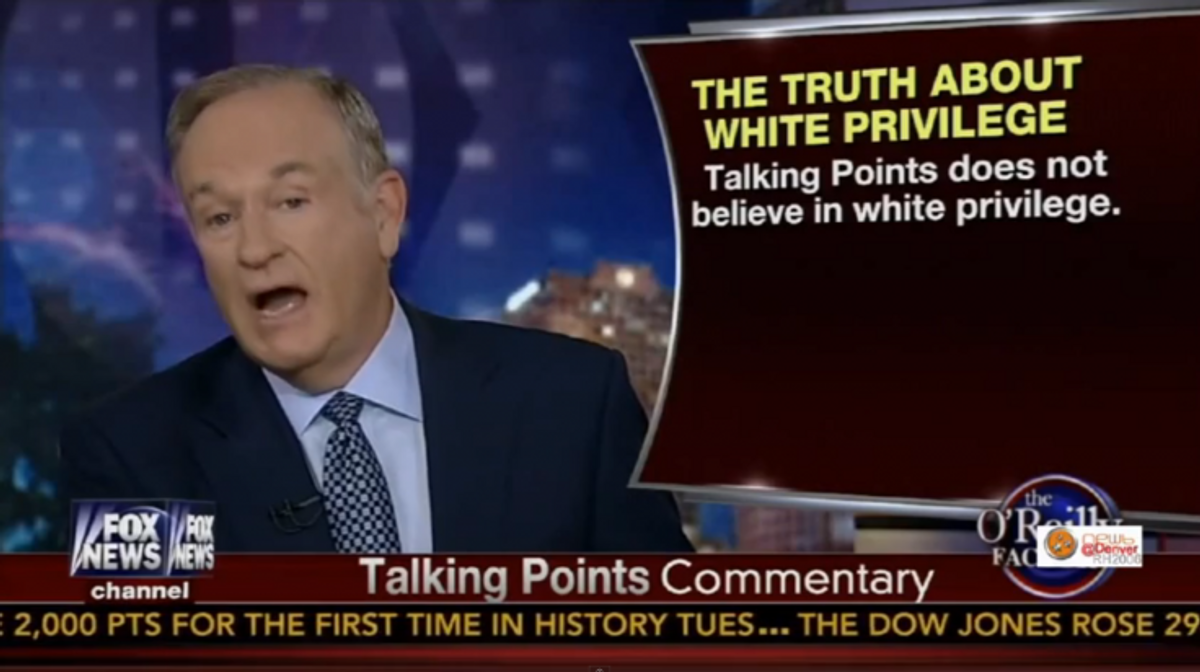 On Monday, Megyn Kelly gave Bill O'Reilly a lesson on white privilege. It was surprisingly on point. Everyone applauded. Tuesday evening, O'Reilly reinforced his extreme ignorance by arguing against white privilege and then accidentally proving it.

In his Talking Points Memo portion of "The O'Reilly Factor," O'Reilly stated confidently that "Talking Points does not believe in white privilege, however there is no question that African-Americans have a much harder time succeeding in our society than whites do." OK, so maybe Bill doesn't want to use the phrase "white privilege" because it is such a loaded term with so much history and maybe he doesn't want to associate his argument with all that. Also, he is a king of hyper-conservatism, so maybe he also wants to save face and not get caught using liberal mumbo-jumbo.

Nope. O'Reilly goes on to excuse white people from bearing the burden of black oppression, blaming it instead on black culture:

"The primary reason is not skin color; it's education and not only book learning." Why are Asian Americans so successful? Because their culture emphasizes education and keeping families intact, O'Reilly argues. "So, do we have Asian privilege in America?"

O'Reilly finishes off his argument with blatant racism:

And then accidentally proves the central idea of white privilege:

But says it's not anyone else's job to fix it:

"But in order to succeed in our competitive society, every American has to overcome the obstacles they have faced."

In her groundbreaking essay "White Privilege: Unpacking the Invisible Backpack," feminist Peggy McIntosh lists 26 everyday "privileges" that white people get to enjoy, but people of other races do not. These include being able to buy band-aids in "flesh" color and knowing they will match your skin, and seeing people of authority on television and recognizing that they look like you. These are unconscious, systemic injustices that cannot be corrected by learning how to "speak properly and act respectfully." (Even the notion of telling someone to speak "properly" is steeped in major privilege.) McIntosh writes that in order to redesign social systems, we need to acknowledge the invisible structure underlying them:

"It seems to me that obliviousness about white advantage, like obliviousness about male advantage, is kept strongly inculturated in the United States so as to maintain the myth of meritocracy, the myth that democratic choice is equally available to all. Keeping most people aware that freedom of confident action is there for just a small number of people props up those in power, and serves to keep power in the hands of the same groups that have most of it already."

Ultimately, when O'Reilly claims that he doesn't "believe" in white privilege, he proves how deeply controlled by it he really is.