The king of trolls: How one fiendish comedian created a twisted Twitter art form

It's one of the web's top aggravations--and the most sophisticated trolling ever invented. Welcome to "schrabbing" 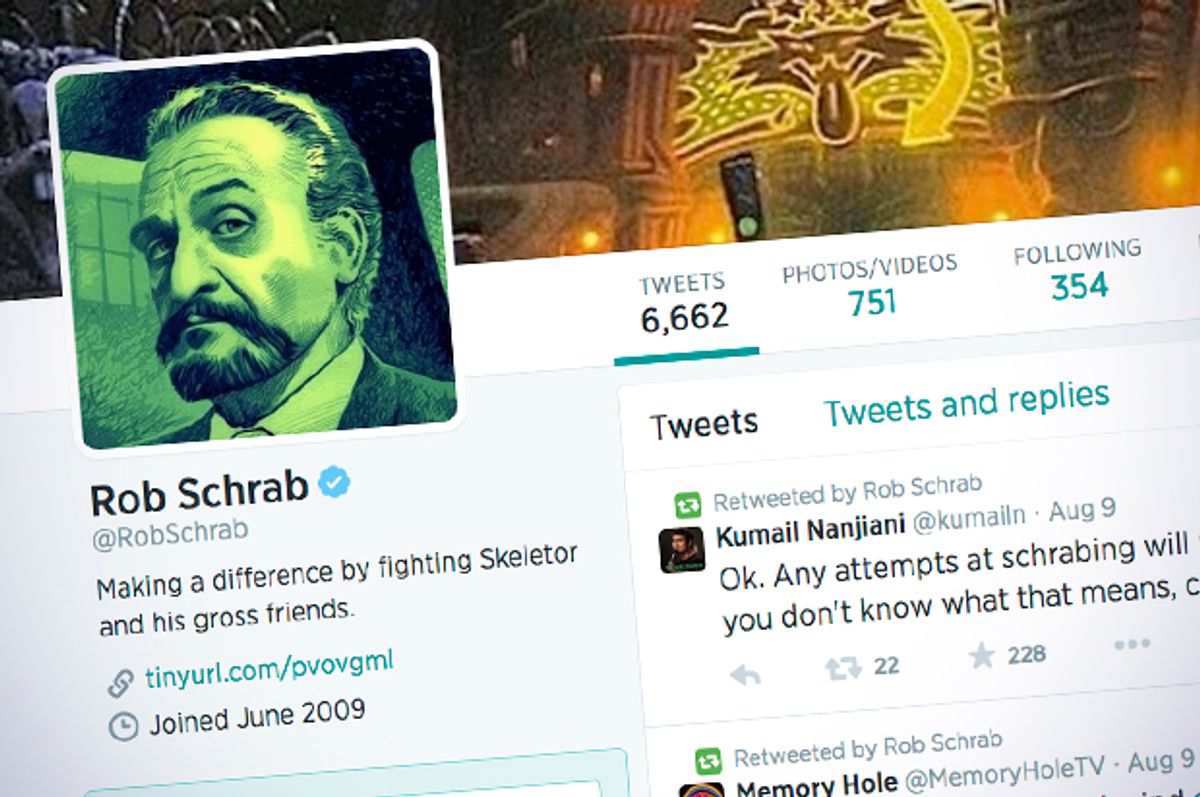 Chances are you've been schrabbed, even if you didn't call it that. In fact, unless you're part of a rather small circle of Los Angeles-based comedians, screenwriters and actors -- or a subscriber to a podcast called "Harmontown," centered around Dan Harmon, the vodka-steeped showrunner of the cult-favorite sitcom "Community" -- you've never heard the term. But that doesn't mean you haven't felt the exquisite agony of being peppered with moronic and profoundly unnecessary questions on social media. Because you have, haven't you?

Schrabbing gets its name from Rob Schrab, an actor/producer who is Harmon's longtime writing partner and the creator of a comic book series called "Scud: The Disposable Assassin." Schrab is only an occasional guest on "Harmontown," an improvised "town meeting" in which Harmon plays mayor, conducted before a live audience every week at a comics shop in L.A. Recently, however, Schrab has become a topic of vitriolic conversation among such regulars as actor Kumail Nanjiani ("Silicon Valley") and Harmon's friend and "Harmontown" comptroller, Jeff Davis.

"Rob Schrab continues his fucking campaign of terror on Twitter," Nanjiani complained in a recent episode. In just one example Nanjiani listed, Nathan Fielder, host of the series "Nathan for You," posted a tweet with a link to a clip of his appearance on "Late Night With David Letterman" and Schrab replied with a question that was answered in the very tweet he was responding to:

"That's the level of humor we're dealing with," Nanjiani went on bitterly. "But it is relentless. Look at his timeline. So much work goes into it, with so many different targets." When Harmon tweeted an announcement of the DVD release of his animated series, "Rick and Morty," Schrab schrabbed him, too:

Like so many tiny irritants -- a pebble in your shoe, a dripping faucet, the tag sewn into the collar of a sweater -- this one becomes a full-fledged torment when amplified by repetition. Schrab deploys a few other master-class techniques of annoyance, such as the imbecilic non sequitur:

But his pièce de résistance remains the stupid question that has already been answered before it was even asked. Attempts at retaliation ("He can't even post a picture of his dog without 150 people responding 'What kind of animal is that?'" Harmon remarked) only serve to spread the viral plague that is schrabbing.

When it comes to complaining about the Internet, trolls grab the spotlight. And while Schrab is engaging in a particularly sophisticated form of trolling, he's also paying perverse tribute to a much less-discussed form of online aggravation: sheer human idiocy. Idiocy is not limited to social media, of course. It flourishes everywhere, but the Internet has given it all new places to strut its stuff.

My own story is illustrative. Salon recently published my interview with novelist Lev Grossman, author of the Magicians trilogy. The very first sentence reads: "The final novel in Lev Grossman’s bestselling, genre-bending trilogy, 'The Magician’s Land,' landed in the No. 1 spot on the New York Times Bestseller list this week." The article is accompanied by a large image of the cover of Grossman's new book. The second comment posted at the bottom of the page, by someone calling himself "The Pragmatist," asks, "I loved his first two books but did the third one ever come out?"

Schrab's bizarre running gag strikes a nerve precisely because Internet culture is teeming with people who really are as careless and/or dumb as the obtuse comic persona he's adopted. They seem to feel compelled to weigh in and call attention to themselves before making even the most remedial effort to learn what's what's going on and what's already been said. They waste their own time as well as everyone else's. (Surely commenting on a story takes longer than simply reading its first sentence?) And they drive us nuts.

Piqued, I took to Twitter myself, to vent my spleen, to which I received the following response from a reader:

I was thunderstruck. I had been meta-schrabbed! To which I say, well played, sir, but also: Is there any way to stop this before it drives the rest of us over the brink?