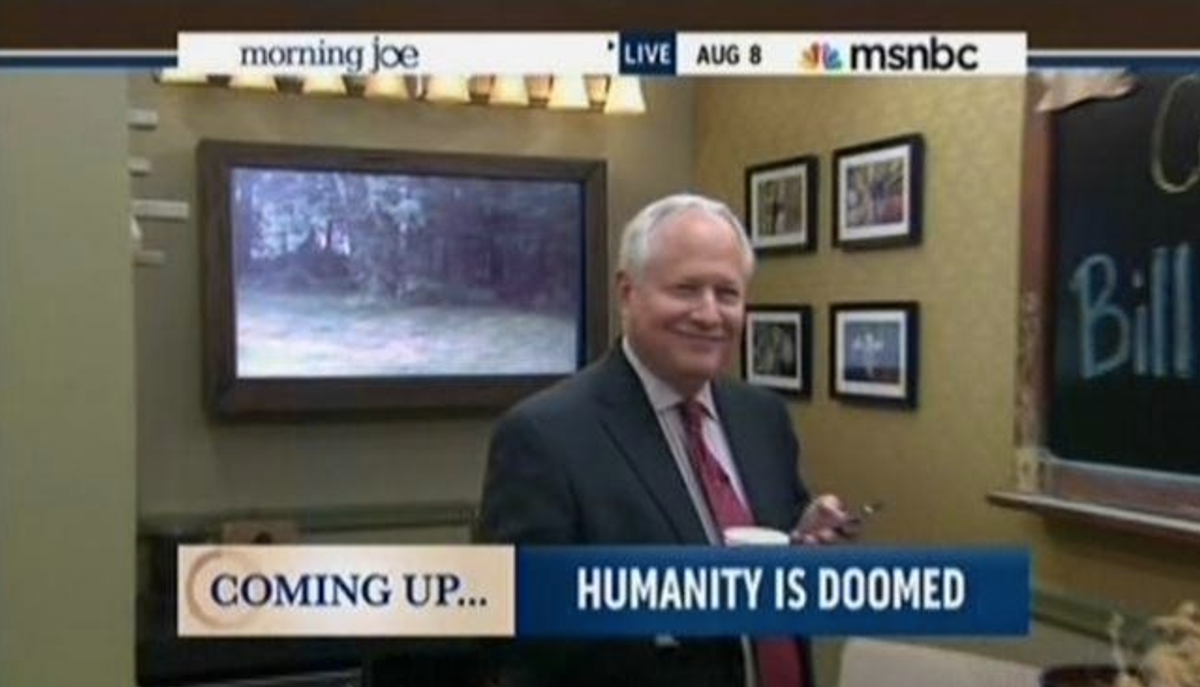 Bill Kristol, the neoconservative editor of the Weekly Standard and all-around person who is wrong about everything, is frustrated at the pace of overseas bombing thus far.

He complained last week about how Obama was being too slow to bomb, even though Obama had already started bombing ISIS targets in Iraq. The bombing continues and has now surpassed 100 bombings since early this month. It is not only not clear when this bombing in Iraq will stop, but the administration is taking surveillance flights over Syria to eye out potential targets for strikes there, too -- a direction in which the Obama administration appears to be leaning.

In other words, once the seal was broken and, for however noble the purpose, the Obama administration decided to start bombing to help those trapped on Mount Sinjar, escalation began. It's unclear what the administration's broader goal is in Iraq -- stop a massacre here or there? Kill off ISIS? -- and, if and when it goes into Syria, what the goals will be there. All of these things should be major causes of consideration for the administration, Congress and the rest of the country before the United States military ends up entrenched in a war covering two nations that suck.

That's one opinion, at least. And then there's Bill Kristol's opinion, which is only a few synonyms away from "bomb first, ask questions later":

"Someone said on a panel with me, 'We can't just bomb. We have to really think about this and have a long debate and discussion,'" Kristol said in an interview with fellow conservative Laura Ingraham during her radio show in a clip pulled by Mediaite. "You know, why don't we just [bomb]? We know where ISIS is. What’s the harm of bombing them at least for a few weeks and seeing what happens?"

Here he is literally mocking someone who suggested that we should "think" and "debate" and have a "discussion" about bombing the shit out of two foreign countries.

Once again: We already have been "bombing them" for a "few weeks," and perhaps Kristol knows that but doesn't think the bombing thus far has been Real Bombing. Or he just doesn't care. Contemporary political punditry no longer hinges on what is actually happening; people just have things that they like to say and they say them no matter the circumstances. Obama could nuke the entirety of Iraq and Syria, and Bill Kristol would go on television and say, "Why can't Obama just bomb Iraq and Syria?"

Whatever idiot host and Tom Friedman and David Gergen -- or whoever else is on the roundtable with him -- would nod, with gravitas, indicating they'd just heard a reasonable argument. Kristol could then be shown images of Damascus and Baghdad smoldering in the wreckage of nuclear obliteration, and Kristol would look into the camera and say, "Why can't Obama just bomb Iraq and Syria already?" When you reach Kristol's level of apparent unaccountability, you no longer have to pay attention to the news as a first step toward deriving analysis of the news. Someone pulls a string on your back and out comes a statement from your mouth that either is or isn't matched by events in the real world. People nod, seriously, and then you go to bed and do the same thing the next morning.

Anyway. What bad could happen after a few weeks of bombing? Well, first let's consider that it was 10 solid years of American bombing and occupying Iraq that created the space for ISIS to operate there in the first place. Now we're considering more. When does it end?

When does it end? is a really good question to ask when considering bombing. Even if the original plan is only for a "few weeks" of bombing, what if, at the end of those few weeks, you haven't made noticeable progress? You'll want to do more bombing. Then pride and face-saving set in. And then you have escalation, and an interminable conflict, and possible blowback. When do you leave? When are conditions safe enough to leave Iraq on its own again? And then there's Syria. These same basic questions apply when considering whether to bomb Syria. And on top of those: What if crushing ISIS in Syria leaves Assad with a firmer grasp on power there? Do we then have to go and take out Assad while we're there?

Consider a recent example of "bomb first, ask questions later" that isn't Iraq. Libya! Libya, much like the current action in Iraq, started out as a "humanitarian bombing" to stave off a massacre. The United States' role in that episode quickly changed from "oh, we're just going to save these people this one time" to providing the air force to rebels marching across the country to effect regime change. Libya is now a wasteland and a failed state.

Questions, debate, consideration: These are good things to do before launching widespread bombing campaigns. Even just a little, well-intentioned bombing can end up ballooning into a situation where more people end up dying than otherwise would have.

But by all means, if Bill Kristol wants to take his Nerf gun over to Syria and Iraq and do some fighting himself, he's more than welcome. We don't need to debate that! Go, Bill, go!