As a new controversy swirls, a reminder that Zakaria's problems start with hunger to advise the rich and powerful 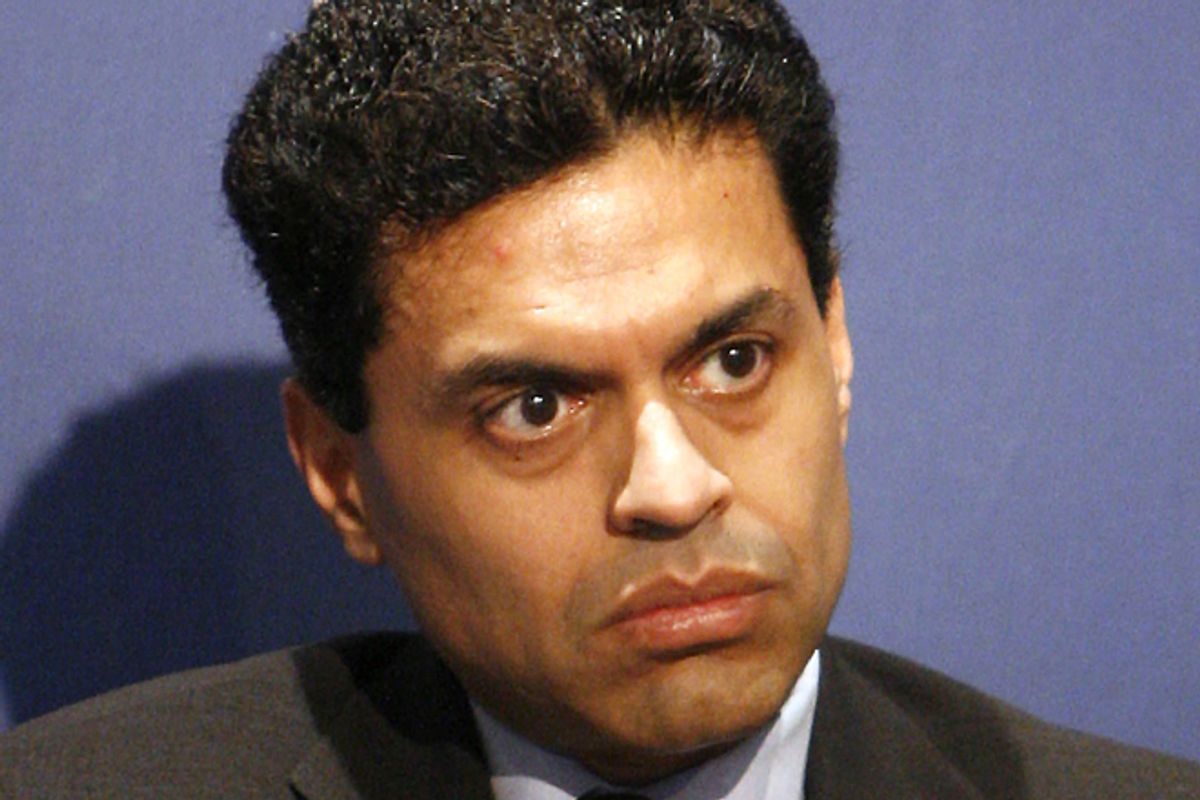 In August 2011, about a year before Fareed Zakaria's misappropriation of some paragraphs written by New Yorker writer Jill Lepore prompted his brief suspension by Time, The Washington Post and CNN, and his resignation from the Yale Corporation, I reported an earlier instance of his duplicitous "editing" as he scrambled to tidy up an uncharacteristically id-like public eruption on the "Charlie Rose Show."

Few noticed the little clean-up effort at the time, but I cited it again here a year later when the Lepore scandal broke. And I want return to it briefly now amid new, increasingly substantial accusations that Zakaria is a plagiarist.

Whenever he has passed off someone else's work and authorial voice as his own, he has crossed a line that Time, the Post, and CNN shouldn't be blurring as shamelessly as they've been doing. Now we're learning that passages in his book "The Post American World" have been lifted from others' published work without proper (if any) attribution or credit.

Is this controversy really only about the affected journalists' resentment of Zakaria's use of their work and about other journalists' envy of his prominence? Does it reflect a wide-spread misunderstanding of how things really work in journalism now that digitalism is opening everyone's access to everything in real time and blurring the value of individual scholarship and authorship?

I don't think so. Zakaria's effort to distract attention from his Rose show eruption matters here because, although no plagiarism was involved, it bared a characteristic hunger -- not unknown in other pundits -- to be the authority and arbiter of the newest "inside" information and strategies for neoliberal elites and their apologists and wannabes.

It's wrong, though not necessarily shocking, for a rushed journalist to lift a few phrases and adjectives from other journalists' own recycling of what are basically just "facts" from academic and think-tank reports and, heaven help us, even press releases. Zakaria has done this, apparently often.

One of many examples presented by the website Our Bad Media shows him reproducing, in his Time column, a couple of sentences -- citing statistics on corporate tax avoidance, gathered by IQ Capital Research for the New York Times-- from a column written and published there months earlier by David Leonhardt.

Zakaria's column didn't credit Leonhardt, the researchers, or the Times. A reader might have assumed that Zakaria had discovered the information himself or that it had long been publicly known. A reader wouldn't have noticed that Zakaria was using Leonhardt's own sentence structure and diction.

Leonhardt and his publisher would be well-justified in taking offense, but does this really matter to the quality of public discourse? Did Leonhardt work any harder at gathering these particular statistics, handed him by the Times' contractor, than Zakaria did in passing them on?

As far as I can tell, the Zakaria column at issue here is an otherwise wholly original, counterintuitive and illuminating essay on tax fairness. It takes off on a proposal by the then-Republican presidential-primary candidate Herman Cain, who championed a flat tax scheme that many -- including Leonhardt and, for that matter, me -- may not endorse, but that Zakaria found worthy of consideration, with some modifications of his own that he proposed in his column.

Fair enough, but, what would it have cost him to credit Leonhardt and the Times'research contractor?

A lot, apparently, at least in his own busy mind. Zakaria's own assiduously cultivated stock in trade relies on his being widely regarded as a one-man Davos, a "go-to" seer for the rich and powerful and for millions who follow their moves. His virtuosity and ubiquity as neo-liberal consciousness-shaper of the hour are driven not merely by his sometimes-illuminating intelligence but by his hunger to advise elites whose prerogatives and policies he smoothly defends.

Zakaria mistakes the hub-bub and dynamism of "free markets" for the vigorous give-and-take of public discourse, when in reality the former often undermines the latter. The neo-liberal mindset within which he lives and moves gives far too much scope to inequality and elitism, worrying more about people who would champion "too much" social equality than about people and undercurrents that are undermining it and that justify elitism itself.

Zakaria pretty clearly conceives a special role for himself in balancing these tensions. He disguises his conviction -- that he and the elites he comforts and only sometimes challenges are special -- with his well-practiced, faux-democratic grace notes and smoke-screens, crafted to secure the approval or at least the acquiescence of the mass audiences he brings to the neoliberal consensus.

This makes Zakaria a profit center, not a prophet. And that matters to his employers, who'll find reasons to forgive him and to keep on blurring the standards of public discourse that make democracy and deliberation viable. Media corporations exist, after all, not to inform the public or help it deliberate but to assemble and re-assemble audiences for profit on any pretext, however sensationalist or degrading, that will assemble them. To keep your eyeballs glued, they've become expert at bypassing your brain and the heart on the way to your lower viscera and your wallet.

Their pretext in Zakaria's case is a good one: He gives large audiences "inside information" and connect-the-dots insights. He provides this in abundance, or seems to, by aggregating the work of other journalists, who uncover many dots but don't connect them as ambitiously as Zakaria does. For him, other journalists are clerks of fact, worker bees, oarsmen in the bowels of a galley at whose prow stands Fareed Zakaria, giving their work direction and meaning.

What happened on the Charlie Rose show, and how Zakaria tried to excuse and bury it, is recounted on my web site, which has all the relevant details and links. Operating as a leader of President Obama's palace guard of pundits (Obama had been photographed during his first presidential campaign carrying Zakaria's "The Post American World," where some of the worst plagiarism occurred), Zakaria went on the Rose show to discredit the academic psychologist and political consultant Drew Westen's early and prescient criticisms of Obama's leadership, which I link and explain in the post.

Westen wasn't a ivory tower, knee-jerk moralist but a tougher, savvier customer than Zakaria and his side-kick on the show, Jonathan Chait, then of The New Republic, had expected. Realizing that Westen was getting the better of him at one point, Zakaria lost his composure:

"Look I -- what I would say, and I'm not going to get into the what-ifs of a professor, you know, who has never run for dogcatcher advising one of the most skilful politicians in the country on how he should have handled this. It's a - "

Rose intervened, re-balancing the discussion and saving Zakaria from himself: "The former would be you and the latter would be President Obama?"

"Yes, exactly," said Zakaria, deft on the uptake, as ever, and eager to right himself. "The whole idea that all of us who've never run for anything have you know, have -- can brilliantly explain how to maneuver another $400 billion through the Senate...."

Still, Zakaria couldn't stop himself from adding, "I'm also a little uncomfortable with people who have facile answers -- 'if only [Obama] would have waved his magic wand...'"

Rose intervened again, wisely: "I don`t think anybody's arguing that there's a magic speech to be made. I do think people can make a legitimate question" -- as Westen was doing -- "which is, Did this president exhibit the kind of skills that he may or may not have that would have produced a different result at various stages in his presidency? These have to do with leadership skills...."

Zakaria muddled off into non-sequiturs and switched the subject, as you can read in the post. At 6:35 a.m. on the Saturday after the Thursday night show, he posted on his CNN blog, under the headline, "What Liberals Fantasize About," an item that attempted to excuse and bury his gaffe. "Here's a lightly edited excerpt of our conversation where I discuss the fantasy of liberals and why many need to grow up," he wrote, but in truth he excerpted the show heavily, dishonestly, obliterating Westen's arguments about Obama's missed opportunities in the Senate and omitting his own condescending response to the professor who'd never run for dog-catcher.

Asked in 2011 at the inauguration of Yale's Jackson Institute for Global Affairs to assess the Iraq War in retrospect, he said that while "it's clear now that costs outweighed benefits and that anyone who says he'd do it over again is not being honest or is not in command of the facts," we must also remember that South Korea, too, seemed "a big mess, a brutal dictatorship, until the 1980s," when it stabilized and became hospitable to Western values as well as investments. Presumably, Iraq might yet do the same. But then Zakaria admonished his Yale audience to "re-balance American foreign policy away from these crisis centers that are riven by 15th-century feuds."

He thus dodged the truth that George W. Bush, Dick Cheney, neo-conservatives, and commentators such as Fareed Zakaria stampeded the American public into unleashing those ancient feuds by wrecking post-Saddam Iraq with fatuously bad, ideologically driven planning. His account at Yale was bad history, bad politics and a good example of trying to eat his cake and keep it, too. He was for the war, then against it, and, then in 2011 he offered others the wan hope that Iraq, like Korea, would stabilize enough to vindicate what so many had supported, with his encouragement, in 2003.

Having made these criticisms of Zakaria a year before his Lepore heist became public, I reiterated them here in Huffington Post afterward, in August 2012, because I'd become convinced that his modus is worse than the plagiarism it sometimes entails.

Zakaria is driven to scoop up anything of value in order to appear omniscient not only because he's immensely self-important, and not only because he congratulates himself on his desire and unique ability to reconcile the rich and powerful with liberal-democratic publics in a "global public sphere" that just might save the planet; he's also driven by something I consider spiritually perverse and, in the end, tawdry.

His lust to become a counselor and consigliere to kings and Head Tutor to their subjects is turning him, for all his intelligence and practiced charm, into a wind-up toy. His offenses aren't mortal or monstrous, let alone illegal or "unprofessional;" they're just opportunistic and pushy. They're a little like having bad body odor and crashing a civic-republican party that needs participants more principled and nourishing than those driven by media corporations that are assembling audiences only for profit.

Must our best political journalists become creatures of those companies and their incentives, even when they're writing their own books? Granted, publishing houses are media companies, too, some of them perversions of what they should be. But publishers and even media-tainment companies like CNN still give him enough latitude to be a far better thinker and even leader than the drill sergeant of the neoliberal cyber-cage that he is becoming.

Will his character and temperament allow him to become something better, with a little help from his critics?