Ferguson's ugly reminders: What a black resistance must look like

We can't depend on the government to make the changes we so badly need. So here's what we can do instead 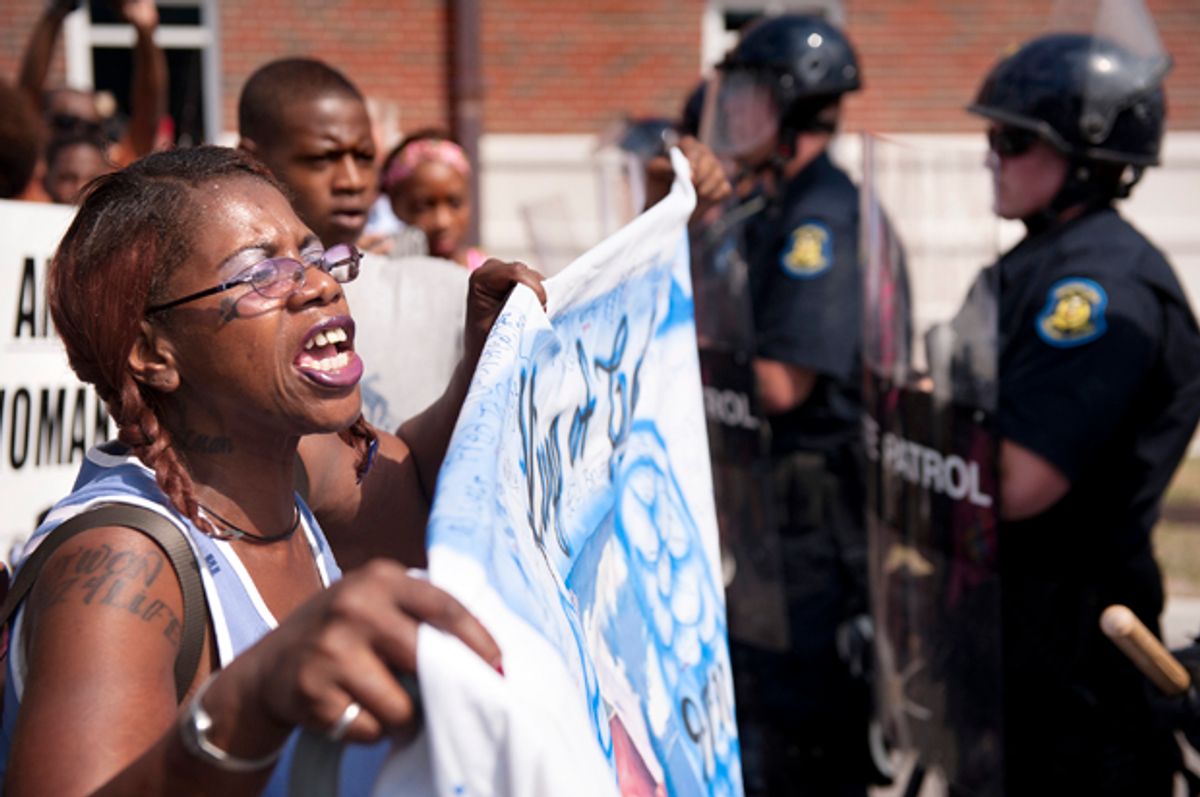 While there's been relative calm of late in Ferguson, Missouri, the events of the past month are unlike anything I've seen. People seem angrier than ever at racial injustice; historical wounds have been opened so wide that mainstream news outlets are now recognizing and addressing that black people are not and were never considered equals in America.

The collective outrage we’re witnessing right now is powerful, but we’ve seen it with Sean Bell, Trayvon Martin, Renisha McBride and so on and so forth. The question then becomes: What can we do two months from now when the protests are just a memory? What can we do if justice isn’t served, if Darren Wilson walks free? What can we do to make the changes that are so badly needed? If there aren’t people in the streets, what does resistance look like?

It can be many different things, but one fact we know is black people can’t depend on the government to fix it for us.

Sure, we've made progress as a people, but we still have a long way to go. Part of it starts with continuing to educate our children about our history of oppression and the systematic racism that still exists.

They don’t teach our full history in schools. Do our children know any historical figures besides athletes, Martin Luther King Jr., Rosa Parks and the others who are obligatorily covered one month out of the year?

We can’t have generations of black children unaware of the underlying sentiment this country has toward people of color and the erasure of our histories. It can be as simple as taking children to a museum that digs deeper into black history, or searching the Internet for lessons and facts to create home activities. Social media can be a great tool in this regard: A tour on Facebook can show you how Chicago’s founding father was a Haitian man named Jean Baptiste Point DuSable and that Crest Toothpaste, Folgers Coffee, Bounce Fabric Softener and Safeguard Soap were all created by an African-American man named Dr. Herbert Smitherman Sr.

While we need to continue to educate ourselves and our children, we have to also push for black history, or non-white history in general, to be taught year round. We need to support programs like Teaching for Change, whose mission is to build social justice by shaking up standard history lessons. And hold our school systems accountable.

Last year a community group in Chicago threatened a lawsuit against Chicago Public Schools because black history was not being taught outside of the month of February, which violates a 23-year-old state law. The school system ended up complying with the demands and implemented a new curriculum for the fall of 2013.

In a 1992 segment on "The Oprah Winfrey Show," former school teacher Jane Elliot, famous for her “Brown Eyes, Blue Eyes” exercise, explained the importance of teaching the history of people of color:

Black consumers are projected to have $1.3 trillion worth of buying power by 2017. We consume so much but own so little. One would think it’d be an easy solution of keeping our buying power in our own communities, but that’s one of the problems: We don’t even own businesses in our own communities, according to Maggie Anderson, author of “Our Black Year: One Family’s Quest to Buy Black in America’s Racially Divided Economy.

As Anderson explains in a 2012 interview:

We assumed, just like other little ethnic enclaves like Little Italy or Greek Town or Chinatown, that for predominantly black neighborhoods all the black businesses there would be owned by the local people. But easily over 90 percent of the businesses on the West Side -- and it's the same way all over the country -- are owned by people who are not black and do not live in that community. So it's not a "buy local" thing, because these folks set up shop in the black community, sell their wares, make their money, hardly ever employ the local people there—and they put the steel bar over the door, pack up at 6:30, get in their car, drive to their suburb, and take that money with them.

Anderson says that her family has adopted this lifestyle and spends at least 55 percent of their income in black business. If we were to isolate even half of our projected $1.3 trillion spending power into only back businesses, the American economy would take notice. The new Black Wall Street could be created. Money talks.

We also need our leaders and public figures (i.e., celebrities, politicians, writers, activists thinkers) to speak out about these injustices -- and not just when something terrible happens. Singer John Legend and actor Jesse Williams are two examples of public figures who continually use their celebrity to shed light on justice and equality issues. Unfortunately, more A-listers aren’t hopping on board. There are fewer celebs on the ground and more just expressing concern via social media. Are they afraid of looking too militant? Are they afraid of losing out on a payday? Are they tired of rallying? Where are they? Outrage fatigue, like affluenza, is not a thing black people can claim to suffer.

One of the many unfortunate reminders from Ferguson is that we are still locked in a struggle, one in which we have to work twice as hard as our white counterparts. We will get looked over by the majority, even if we are better. We will get harsher punishment for equal or lesser transgression.

We can’t march in the streets of Ferguson until kingdom come, but we can take our power back and use it to incite the change we want. It will take dedication, motivation and accountability.