From murderous detectives to evil space police: The worst cops in comics

These corrupt, abusive, head-severing cops are among the most sinister law enforcers in comic books 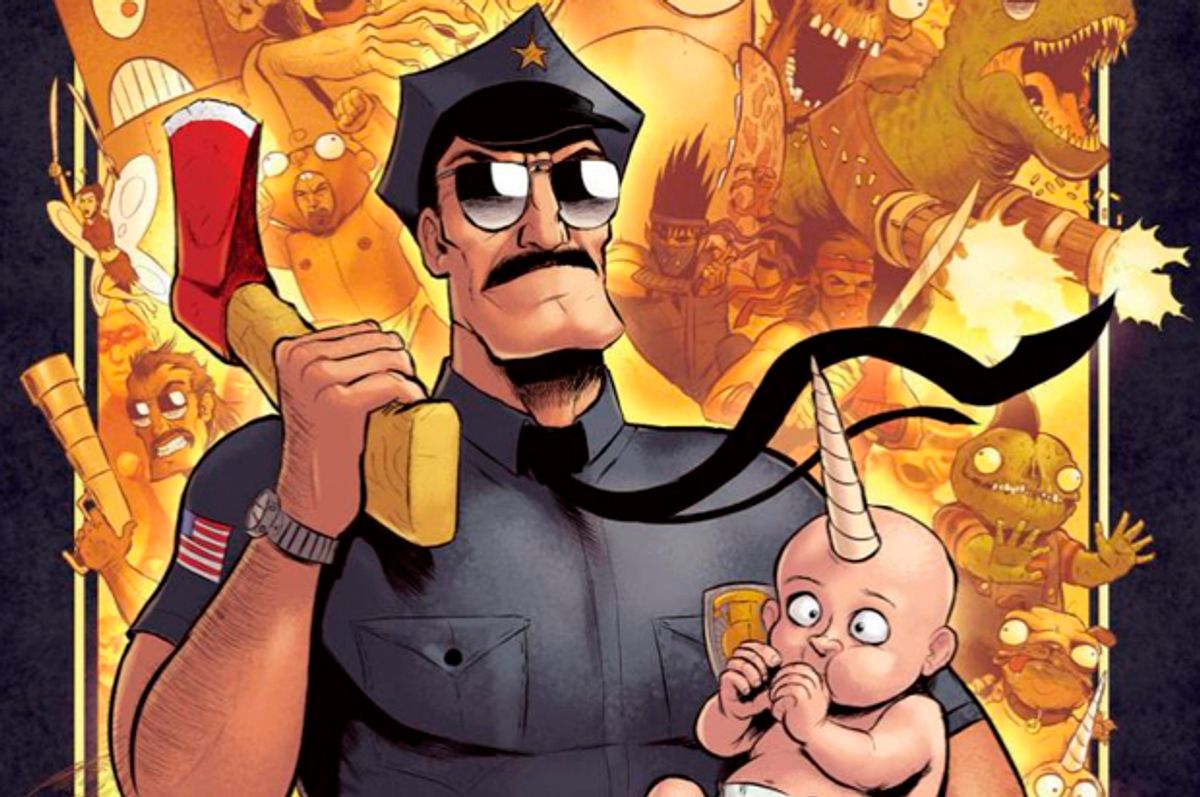 Comic books worlds, like the real world, have their share of good and bad cops. Commissioner Jim Gordon is without question the most famous comic book cop, and he’s one of the most sympathetic and noble characters in comics. Gary Oldham brilliantly brought Gordon to life in the Christopher Nolan "Dark Knight" trilogy, and I have high hopes for the new “Gotham” series — even if turning “Gotham Central” into a TV show would have been an easier trick. That DC series featured many other great cops such as Maggie Sawyer, Crispus Allen and Renee Montoya, all of whom represent their badges well.

However, comic book cops — and Gotham cops in particular — tend to be corrupt, murderous and borderline evil. They often act as a contrast, and an impetus, to the spandex-wearing heroes who have to save the day. If you ever walk through a portal to a comic book universe, I hope you avoid all of the following boys in blue.

Flass is, without question, the patron saint of bad comic book cops. In “Batman Year One," which is Batman’s ultimate origin story, Flass’ first words to partner Jim Gordon tell the whole story: “Welcome to Gotham, Jimmy. It’s not as bad as it looks. Especially if you’re a cop. Cops got it made in Gotham.” This classic story by Frank Miller and David Mazzucchelli is full of corrupt cops, from hothead SWAT leader Howard Branden to sweaty commissioner Gillian Loeb. Gotham is a petri dish of corruption for a reason: If the police department had half a clue, why would you need Batman? A lot of these cops suffer grim fates in Jeph Loeb and Tim Sale’s wonderful “Dark Victory.”

In “Red Team,” Garth Ennis and Craig Cermak’s recent Dynamite comic, Mellinger and three other cops comprise a special team who are very good at their jobs. They’re smart, capable and tough, but they’re also frustrated, so they end up taking a route Ennis is an expert at writing: the vigilante route. When you start murdering criminals, it’s safe to say you’ve moved from playing good cop/bad cop to bad cop/executioner.

In most respects, Pilgrim is a great damn cop. She and partner Christian Walker investigate superhero deaths in “Powers” (soon to be a PlayStation TV series) and they’re both great at it. The only problem — spoiler alert — is that Pilgrim has a tendency to murder suspects, which is exactly what she did to Johnny Royale, who was sort of the Lex Luthor of “Powers.” Pilgrim isn’t simply a “bad cop,” though, and this series does a great job of showing how a person can follow the rules and do the right thing most of the time but still be capable of committing murder. If the TV show captures half the complexity and drama of the comic, it will be a gem.

The Green Lanterns are basically space cops, and Sinestro is one of the worst. As the best version of Sinestro’s origin goes, a Green Lantern named Prohl Gosgotha crashed on the planet Korugar. Injured and pursued by bad guys, Gosgotha gave his power ring to the anthropologist Sinestro, who fought the pursuers off.  But when the ailing Green Lantern asked for his ring back — which could have kept him alive — Sinestro refused, since he dug the power that went with the ring. Thus began his career as a successful and brutal Green Lantern who would eventually become a dictator, mentor Hal Jordan, get thrown out of the Green Lantern corps, create a yellow power ring and found the Sinestro Corps, etc. Sinestro’s evil deeds could fill an encyclopedia, but his original sin of becoming a space cop by letting another space cop die damned him forever (as did his appearance in the awful “Green Lantern” movie).

In Marvel’s Ultimate Universe, characters were refreshed with contemporary versions of their origins. For the Punisher, that meant a new back story for the murder of his wife and children in Central Park. In this three-issue arc of “Ultimate Marvel Team-up” — written by Brian Michael Bendis and exquisitely illustrated by Bill Sienkiewicz — Frank Castle, the future Punisher, was a cop. Unlike just about everyone else in his department, Castle was honest, and he wasn’t quiet about it: He ratted on his dirtball colleagues, including their ringleader, Lieutenant Artie Jillette. This directly led to the assassination attempt on Castle that killed his family and turned him into a murdering vigilante. I won’t spoil anything, but even though ever-righteous Daredevil tried his damnedest to keep the Punisher from killing Jillette, there was no bright, shiny future for this corrupt piece of crap.

Brian Michael Bendis is one of comics’ best crime writers, so it’s no wonder he’s included so many bad cops in his work, including “Scarlet,” which is illustrated and co-created by Alex Maleev. As explained in narration addressed directly to the reader, lead character Scarlet was hanging around with her boyfriend Gabriel Ocean and other friends in Portland when Dunes decided to hassle them, assuming they had drugs. Gabriel didn’t take too kindly to this bullshit move, and he popped Dunes in the mouth, which led to Dunes' tracking down Scarlet and Gabriel, putting her in the hospital and him in the morgue. From there, Scarlet became a vigilante dedicated to fighting (and sometimes killing) dirtbags like Dunes. If you’re sick of vigilantes being dudes and need a new female badass antihero, you will love this series.

Of course, Axe Cop is actually a hero. Still, he makes this list because I can’t imagine he follows regulations when his version of the Miranda rights is “I’ll chop your head off!” Also, the rest of this list has left me depressed, and I’ve been dying to write about “Axe Cop.”  This absurd, surreal, cuckoo-bananas humor series began when a 29-year-old comic artist (Ethan Nicolle) and his 5-year-old brother (Milachai Nicolle) started collaborating, and it’s exactly as creative and bonkers as you would expect from the mind of a kindergartner. The leaps in logic are amazing, as in a flashback to Axe Cop’s youth that includes lines like “Because he was a baby with a mustache, his parents put a hat on him and sometimes called him Baby Mario” and “Axey’s parents ate only candy canes for every meal.” Axe Cop is the best kind of bad cop: ridiculous, well-intentioned — and, most important — fictional.