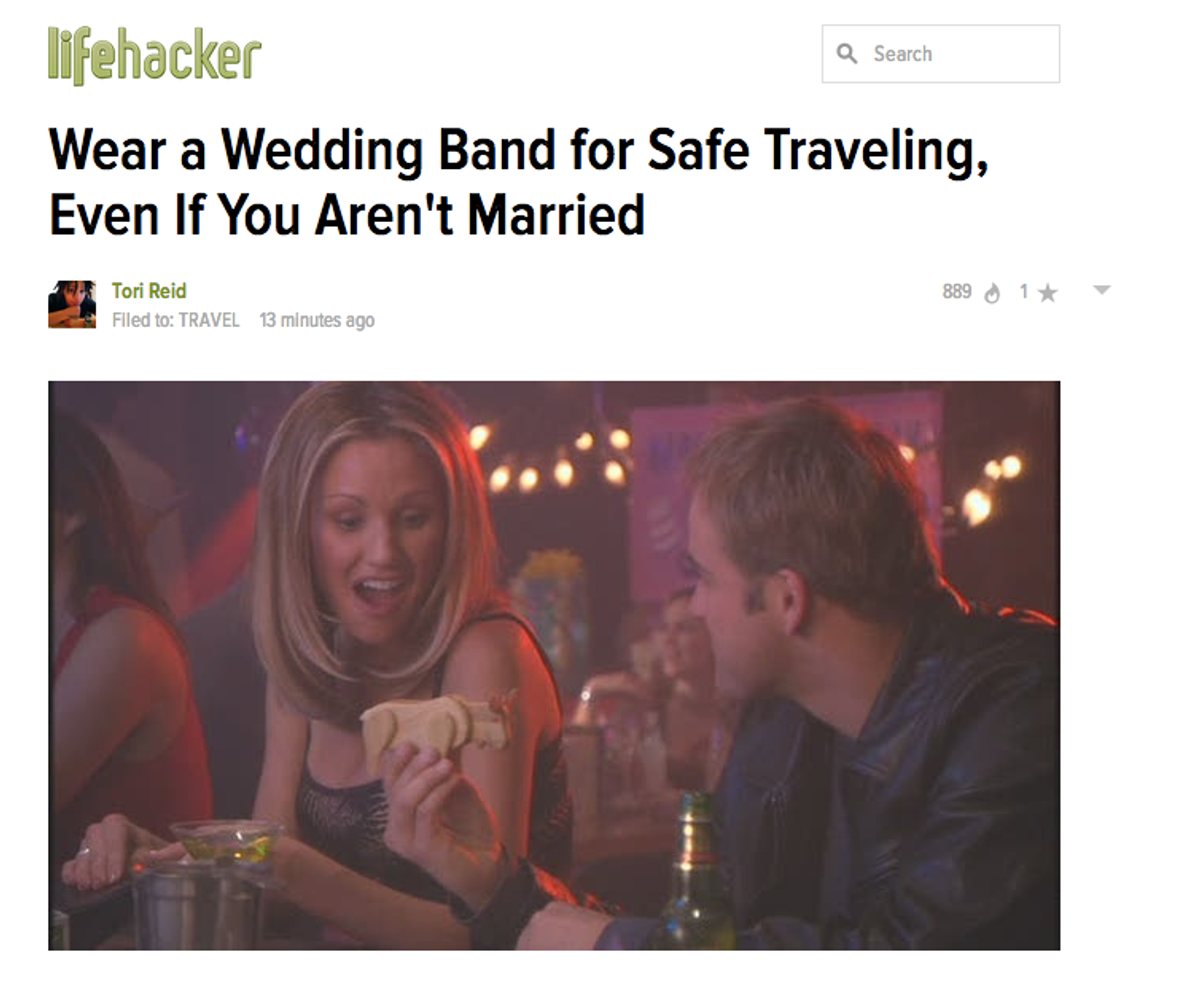 Hey, ladies: Do you want to avoid being raped or sexually assaulted? Do you lack the desire to shell out good money for some fancy technology -- a pen-size electronic or special nail polish -- that will tell you if someone might have roofied your drink? Do you just want to go have a drink at a bar -- or go anywhere in public, really -- without having a strange man approach you and say sexually suggestive or explicit things?

Well, don't worry: Lifehacker has an easy tip to help you prevent that unwanted sexual attention or serious threat to your personal safety. Just wear a wedding ring -- even if you're not married!

Though you may not have tied the knot just yet, what the ring signifies could be enough to keep you out of harm's way. Creepers will assume that you're already spoken for, and if they're really up to no good they'll consider the fact that your husband may be nearby, ready to protect you. ...

If you are approached by a creepy stranger, flash the band and use your faux husband as an excuse to walk away.

Or, you could just stay home, and avoid going out altogether unless you're going to have a man by your side -- indicating to any potential predators that you are the property of an adult male, so they had better stay away and respect his claim over you, since they clearly don't respect your claim over yourself.

This advice is not a "lifehack." It's an instruction manual for perpetuating rape culture. When women use relationships with men -- whether they're real or make-believe -- to ward off unwanted sexual attention, the excuse is effective because, yes, "creepers will assume that [they're] already spoken for." The assumption is not that women can speak for themselves, or that they have the ability or right to reject a man's sexual advances -- it's that she "belongs" to another man, and that he is more worthy of respect than she is.

For evidence of this, consider the woman who, earlier this week, was punched in the face after she told a man she didn't know to stop groping her at a public carnival. What if, instead of telling the stranger to "stop touching [her] body without permission," she had flashed a wedding ring in his face and said, "stop that, I'm married"? Does the fact that she didn't feign betrothal put this woman at fault for attempting to stop her own sexual assault by having the gall to tell a man that he had no right to touch her without consent?

That is the implication of Lifehacker's advice. Quick and easy fixes for the immediate threat of sexual assault do not eradicate the larger problem of sexual assault, nor do they eradicate the inequality, sexism and misogyny that fuel it. Instead, advice like "wear a wedding band" perpetuates a dangerous rape culture, in which women are forced to bear the burden of warding off physical danger that is treated as inevitable. Rape and sexual assault are not inevitable. They do not have to be a fact of life. So here's a good lifehack for avoiding them: Don't rape or sexually assault anyone, ever, under any circumstances -- whether she has a husband or not.