Reince Priebus' sad world: It's actually Democrats who are doing badly with women, he thinks

The RNC chair's recommendations for a more "inclusive" party have fallen flat, so now he's living in fantasy-land 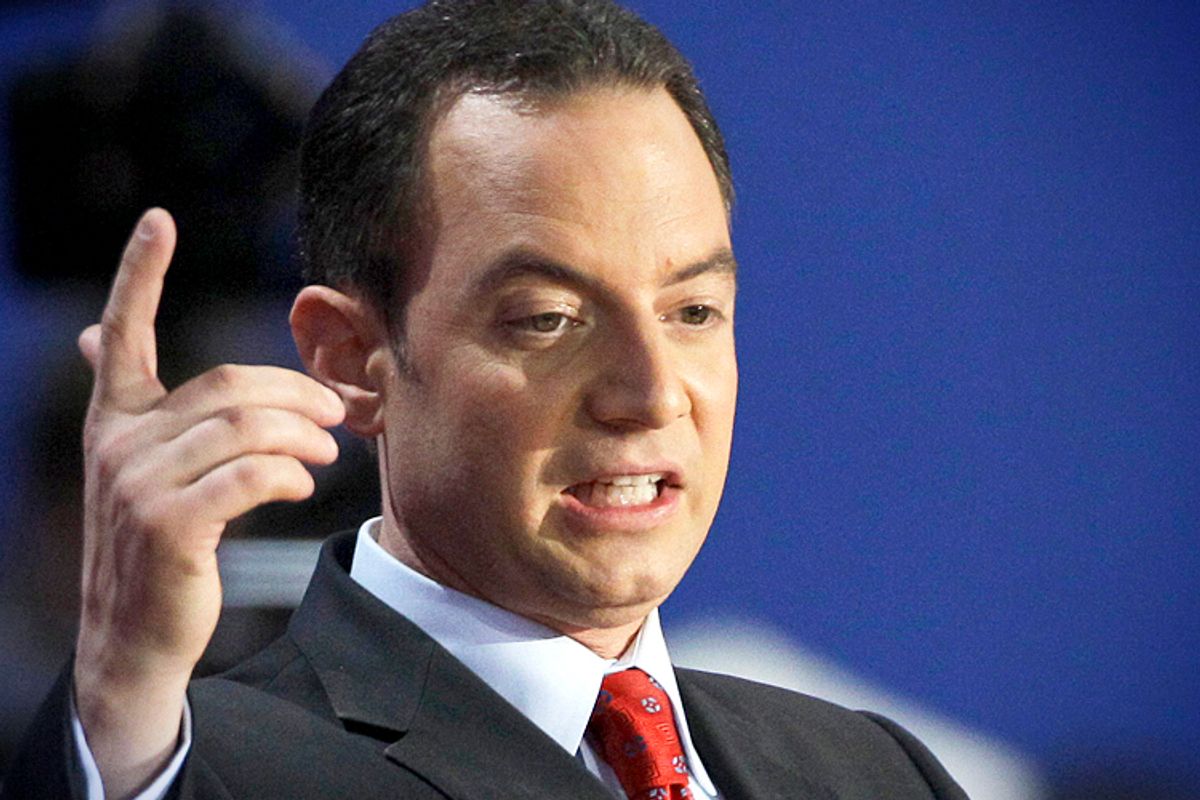 It was about a year and a half ago that Reince Priebus' Republican National Committee released its "autopsy" of the 2012 election, making hundreds of recommendations for how the party cannot suck so much. Among its recommendations were a "a $10 million marketing campaign, aimed in particular at women, minorities and gays." It suggested that "biologically stupid" remarks had hurt the party among women and that Republicans must "change their tone," Priebus said, to show "dignity and respect, that nobody deserves to have their dignity diminished." Overall the message was about being more inclusive -- not just rhetorically, but in policy prescriptions as well. The party "must embrace and champion comprehensive immigration reform," according to the autopsy.

Let's take stock of where the autopsy's recommendations have been heeded, specifically with regard to the party's poor showings among Hispanic voters and women.

As you may have seen in the news, the Republican Party did not -- did not -- "embrace and champion comprehensive immigration reform." The House, after a year of waffling, ultimately rejected acting on immigration reform after it faced such a backlash from its base for even dipping its toes into such treacherous waters. The House has passed border legislation calling for an end to President Obama's Deferred Action for Childhood Arrivals program, which delays deportations for certain young people. And if Obama decides to expand DACA to cover potentially several million more undocumented immigrants, the Republican House leadership will have to fight mighty hard to quell government shutdown fever within its ranks. Even those Republicans in the Senate who did "embrace and champion" comprehensive immigration reform last year have jumped ship. Sens. John McCain and Marco Rubio, two of the principle authors of last year's immigration bill, have either distanced themselves from or totally abandoned it. The long and the short of it is that instead of working to be more "inclusive" since 2012, the GOP is arguably more hostile to Hispanics than at any other point in history. So that's not going well.

And how's the party doing with the Women People? Slightly less terribly, but terribly, nonetheless. An internal report titled "Republicans and Women Voters: Huge Challenges, Real Opportunities," commissioned by Crossroads GPS and American Action Network, leaked to Politico this week. It's a doozy. While the GOP has been winning among married women, it has been getting absolutely trounced among unmarried women. The report determines that female voters "view the party as 'intolerant,' 'lacking in compassion' and 'stuck in the past.'"

When Priebus was asked to comment on the leak, he agreed that it was terrible news -- FOR DEMOCRATS.

"You know, I'm not sure," Priebus responded. "But I think the point of that poll wasn't reported by Politico. The point was if you looked at it, women were rejecting the Democratic party by 40 percent; they were rejecting the Republican party by 50 percent. I don't think either party can do a victory lap here."

Indeed, no one is confusing the Democratic Party with America's Greatest Organization. But these are humiliating figures for the Republican Party in a "six-year itch" cycle in which the president has very poor approval ratings:

Democrats have a lot of soul-searching to do about what sort of party they want to be as Obama's presidency winds down. Are they going to be a party of Wall Street-friendly centrists or economic populists, etc., etc.? Republicans have to figure out where they stand on policy issues, too, but they also have to figure out how not to be seen as a group that's only for landowning white men. Who are old. The autopsy didn't work, because what comes after a presidential election? A midterm election! What wins midterm elections for the GOP? Getting angry old white dudes riled up! That gives the party a false sense of confidence heading into a presidential election where the same strategy doesn't work. What would be interesting to hear from Priebus is, how is the GOP ever going to get out of the Trap of Alternating Cycles that's structurally determined to prevent the party from changing?