The origin of an appetizer: A look at the creation of calamari 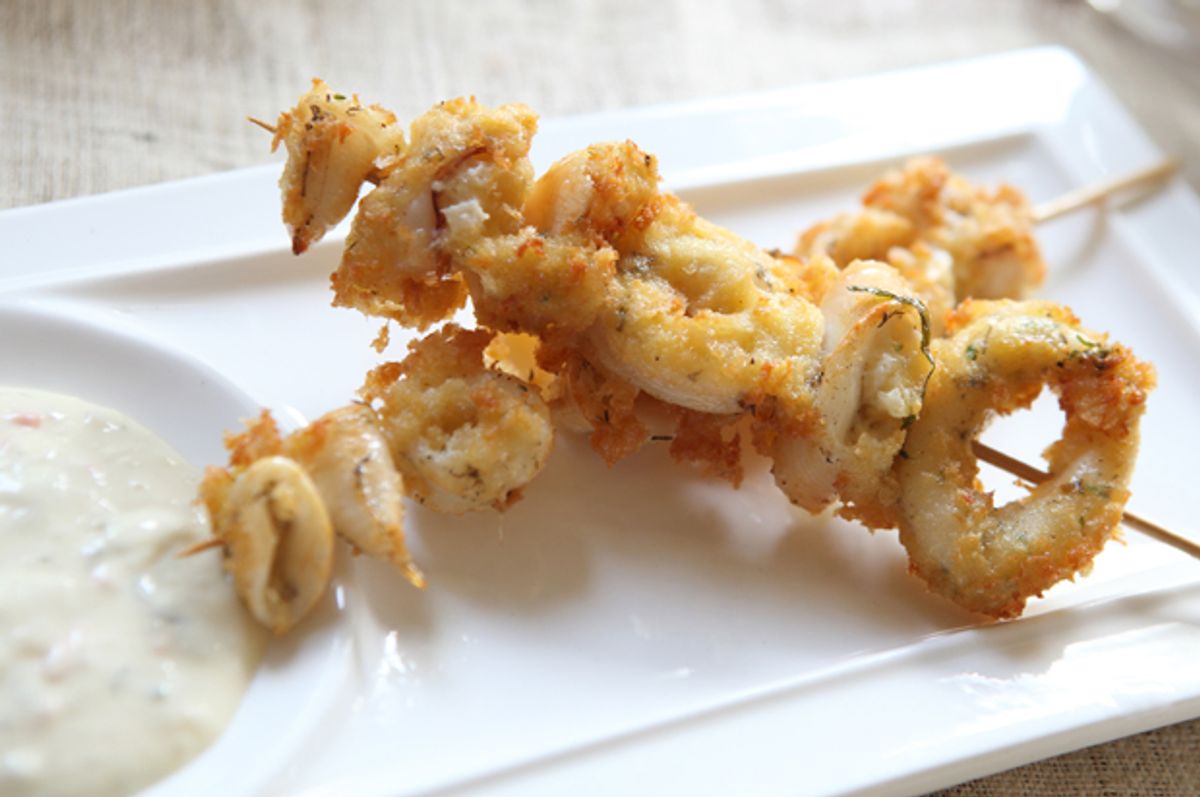 Calamari, the Italian word for squids, has long been a staple food source in the Mediterranean, but took a bit longer to catch on in North America where now, along with the buffalo wing, the potato skin, the jalapeño popper and the mozzarella stick, it dominates the appetizer sections of menus at establishments both gourmet and pedestrian, served alongside dipping sauces that range from lavender aioli to balsamic vinaigrette to tartar or marinara sauce.

Until somewhat recently, fishermen along North America’s eastern seaboard used the calamari they caught as bait. If they had enough bait, they would discard the squids back into the sea. According to the New York Times, “Even up to [1981], squid fetched fishermen barely 10 cents a pound. Today the price is more than [$2] a pound and squid, or calamari, as it is increasingly being called, has become fancy fare...”

The popularity of squid on North American menus is said to have begun as a trial-and-error experiment by the Cornell Cooperative Extension Division whose mission is, among other things, “to improve New York State communities through partnerships...in the areas of agriculture and food systems...” As Long Island fishermen in the 1970s and '80s had “taken a hard hit...as the marine stocks traditionally depended on flounder and cod...but these are greatly reduced in numbers. So there has been much legislation to prohibit their over harvesting,” the CCED encouraged “fishermen to remain in business by going after underexploited and underfished species...to literally stay afloat.”

The Long Island Fisheries Assistance Program got on board with the CCED, and soon afterward, so did the Empire State Development Program, and soon after that, so did the Economic Development Administration of the Federal Commerce Department. And since the movement went federal, the movement went national. Restaurants that couldn’t buy as much haddock and cod and flounder and other overfished species as they were used to were encouraged by local distributors and the feds alike to replace such items with squid. Chefs were encouraged, via federally issued memos, to treat the squid as they would any other fish in order to foster any kind of familiarity with the customers, who, widely in North America, at least, prefer to take their fish encased in breading and deep-fried with a dipping sauce.

Squeamish and skeptical restaurant owners believed such a large meal-sized portion of a heretofore uncommon and forbidding ingredient might scare away customers, so they began, as a trial run, offering it in smaller portions as an appetizer. The CCED, along with the other state and federal programs involved, encouraged both fishermen and restaurants to call the ingredient (for human consumption) by its Italian name, as it’s known along large sections of the Mediterranean, correctly believing that the word evokes a sense of European exoticism that the word squid decidedly does not. The CCED knew that what we name something determines whether or not we will eat it. They set out to actively “tap into” and change “consumers’ tastes,” and they pulled it off.

Richard Lofstadt, president of Long Island Seafood Export Inc., declares, "We realized that in order to make money we had to move into exporting what was available and at the same time in demand. Squid turned out to be the most plentiful. Through the assistance program we got money to buy a state-of-the-art squid-skinning machine. We used to be able to skin about 300 pounds a day by hand. That was with 10 to 15 people working. With the machine we skin about 3,000 pounds of squid for daily packaging."

“Changing ethnicity...may be a factor for the increase...in popularity. Asian immigrants, one of the fastest growing groups of newcomers [to North America], use squid widely,” the Times reports.

“In 1989, the total [sales of squid nationwide] was 127 million [pounds]. In 1994, sales...totaled 215 million pounds...” While, nationally speaking, this seemed like a whole bunch, Japan, as far back as 1980, was harvesting over 600 million tons (or 1.2 trillion pounds) of squid each year. If a typical calamari appetizer includes a quarter-pound of squid (not including the weight of breading and accoutrements), then Japan alone, way back in 1980, was pulling in enough squid to make 4.8 trillion plates of the stuff for T.G.I. Friday’s. That’s 4,800,000,000,000 calamari appetizers. In Japan alone. Every year. If, once cleaned and cut and portioned and breaded, and once all lemon wedges were sliced, and all accompanying sauces prepared and spooned into ramekins, and all green-leaf lettuce garnishes washed and plated, it would take the equivalent of 63.4 million years to deep-fry that much calamari to the desired golden brown.

63.4 million years ago, during the Cretaceous-Tertiary period of geologic time, it is presumed that the asteroid that ignited the extinction of the dinosaurs struck the Earth. The carbon in the Earth’s crust liquefied. Sunlight was obliterated. Photosynthesis ceased. Mosasaurs died, and plesiosaurs died, and pterosaurs died, and invertebrates died, and plants died, and insects died.  Marsupials disappeared from North America. Save for nautiloids and coleoids — octopods, cuttlefish, and squids — all species of the Cephalopoda class went extinct. It would be approximately another 63.2 million years until humans walked the Earth, and another 199,950 years after that until the modern deep-fryer was invented.

Matthew Gavin Frank's latest book is "Preparing the Ghost: An Essay Concerning the Giant Squid and Its First Photgrapher"