How this politician could help save the planet

Marina Silva could become the first environmentalist to lead a major world economy. But what would it look like? 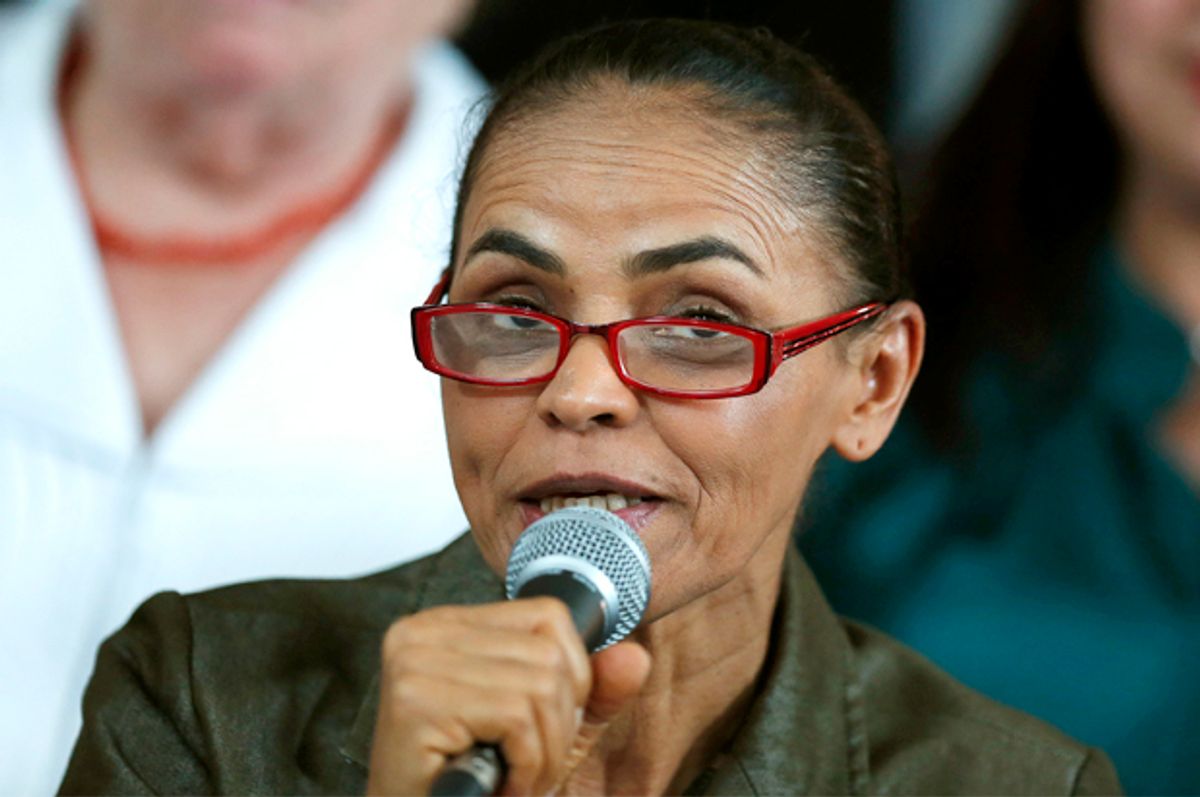 When Brazilian presidential candidate Eduardo Campos’ plane went down near Sao Paulo this month, one of the most improbable consequences may have been to thrust the Amazon center stage in the race.

Yet that’s what is happening now that Campos’ running mate, environmentalist Marina Silva, has taken his place on the ballot for the October vote.

Silva, who learned to read and write only at age 16 after growing up in poverty on a remote jungle plantation, has a certain appeal with disgruntled voters. She even won praise from Greenpeace during her five years as environment minister.

Now a poll predicts 56-year-old Silva will squeeze into the second round of voting and narrowly beat President Dilma Rousseff. It is the first time that Rousseff, 66, has been behind in the polls.

This could make Silva the first environmentalist to lead a major world economy. And what happens to the environment in Brazil, home to the planet’s great green lungs, matters on a global scale.

It would also make her the first Afro-Brazilian president, in a country with a huge black population.

Some believe Silva’s lead won’t last. But David Fleischer, a political science professor emeritus at the University of Brasilia, says that’s “just a hypothesis.” He points to how strongly she was polling in 2013 — until a court ruled in October she had insufficient signatures to register as a candidate for her new party. Then she joined Campos’ Brazilian Socialist Party ticket.

“Before she was ruled out as a candidate in her own right she was receiving 27 or 28 percent, and was looking like she would really rival Dilma. She has a real shot now,” Fleischer says.

What would it mean for Brazil’s environmental policies?

Green groups generally give Dilma Rousseff low scores. But nothing riles them quite like the multibillion-dollar mega-dams that she has pushed in the Amazon, flooding millions of acres of rain forest, displacing indigenous communities, and even causing a spike in carbon emissions.

“It would be very difficult, even if she is elected, to reverse that,” Fleischer says. “Brazil needs electricity and you would not want to be blamed, as [former Brazil President Fernando Henrique] Cardoso was, for causing blackouts.”

But Sergio Abranches, a Rio-based environmental journalist and analyst, disagrees. “Yes, it is a very tough decision,” he says. “But there is a simple way to solve the problem which is to close them. These dams are all in the red and she just needs to stop giving the consortia more money. Remember, there is a huge majority who reject the dams.”

As environment minister, Silva launched several programs that slowed deforestation in the world’s largest tropical rain forest. They included the Sustainable Amazon Plan and the Plan to Prevent and Control Deforestation in the Amazon.

She also increased resources for enforcement of environmental laws routinely flouted in remote corners of the jungle. The resulting plunge in deforestation rates even outstripped the simultaneous drop in commodity prices, whose highs some analysts had pinpointed as a major driver of the destruction.

But that changed once Rousseff — who as energy minister had frequently battled with Silva’s Environment Ministry — took office as president in 2011. “During Dilma’s presidency all that effectively stopped,” Abranches says. The result has been that the deforestation rates have spiked again.

That may not all be Rousseff’s fault. The president actually fought hard to stop congress from relaxing the forest code. But were Silva to take her place, she could be expected to attempt to roll back those changes.

Silva has maintained Campos’ conventional market-friendly economic approach, includingcommitments to fiscal discipline, low inflation and not to interfere with the floating exchange rate.

That may disappoint some of her supporters on the left but, with a bit of luck, it might also restore the growth that’s stalled under Rousseff. Brazil’s economy will expand by just 1.4 percent this year, the United Nations says, down from 2.5 percent in 2013.

If Silva is able to get the economy moving again that could give her more room to maneuver on the environment. On the one hand, she would have greater tax revenues to spend on enforcing safeguards in the Amazon and elsewhere.

On the other, a stronger manufacturing sector could make Brazil less reliant on exporting commodities such as timber, beef and soybeans that have helped fuel deforestation.

As environment minister, one of Silva’s biggest political enemies was agribusiness, which fought tooth and nail against her attempts to limit agricultural expansion in the rainforest.

“The agribusiness caucus in congress will continue to be very large and powerful,” Fleischer says. “She may decide not to put too many chips down on that battle.”

Yet others see a rare opportunity for Silva to make nice with the sector — and help the environment at the same time. Abranches insists: “There is a path to build a bridge to agribusiness.”

Step one, he says, would be to rebuild the country’s ethanol industry by using bagasse, the waste from the country’s vast sugar plantations, and branches and leaves from eucalyptus trees used for timber to make affordable clean fuel.

Currently, 60 percent of Brazilian cars are equipped to run on ethanol. Yet just 3 percent of them actually do, because subsidies for gasoline, intended to counter inflation, make it cheaper than ethanol.

Government support for Brazil’s long-suffering biodiesel and biotech sectors, including developing crops to cope with climate change, would be two other ways Silva could win over agribusiness and minimize opposition to her cherished Amazonian policies.

Even if Silva doesn’t win in October, her mere presence in the presidential race — and her powerful green messaging — could positively influence Brazil’s environmental policies.

Few doubt her credentials. Her introduction to green campaigning was with legendary Amazonian activist Chico Mendes, who was murdered in 1988.

But what about her two main rivals? Rousseff and Aecio Neves, a centrist senator, may feel the need to beef up their own green commitments on everything from energy efficiency to the Amazon.

Not everyone is sure that there will. “They will increase lip service to the environment,” says Paulo Barreto, a researcher at the Amazon Institute of People and the Environment. “I would not bet on Dilma doing anything differently. She just doesn’t connect with the environment.”

But unless Silva’s poll numbers deflate quickly, Neves and Rousseff will be forced to take action. Fleischer says: “Like [union leader-turned-president] Lula, her personal story, of working her way up from extremely humble beginnings, appeals to most Brazilians. They feel she is one of them.”

By contrast, Neves is a scion of a powerful political clan, while Rousseff’s father was a Bulgarian political exile and successful businessman.

Silva’s main rivals may have little choice but to suddenly reveal their inner tree huggers.