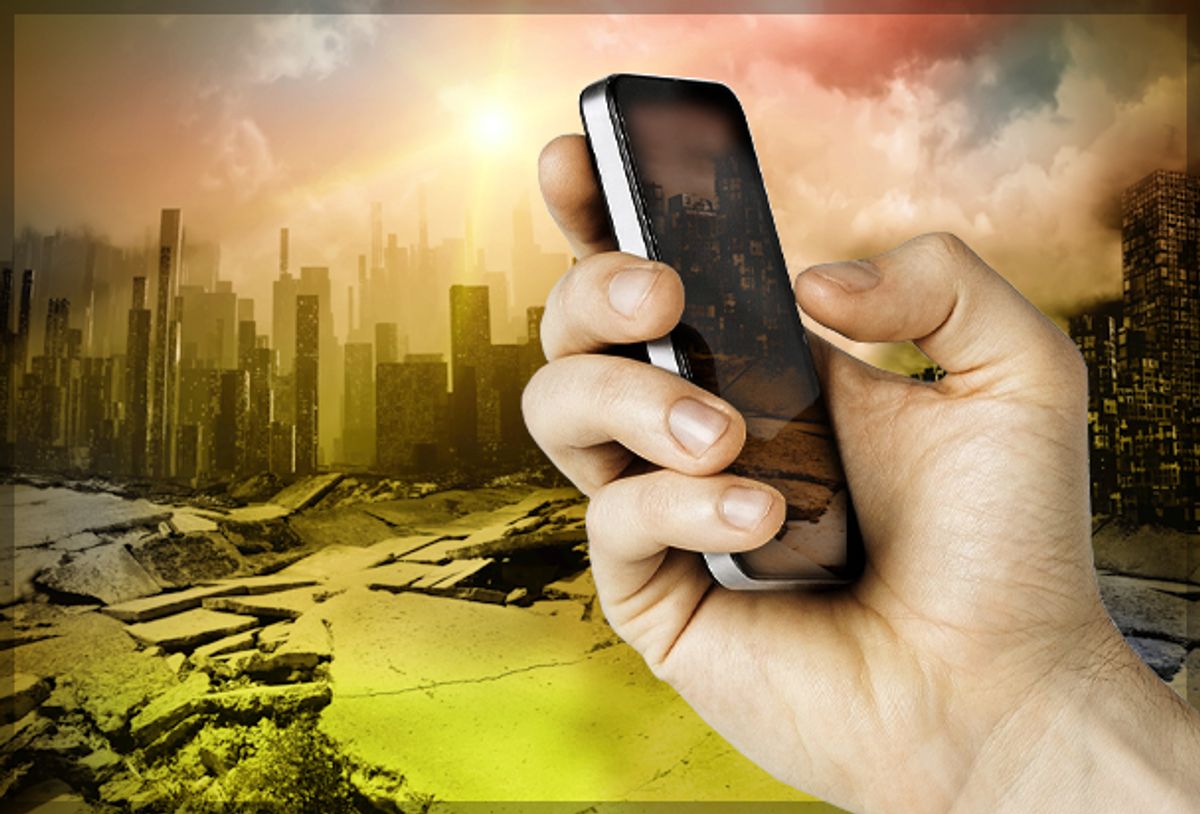 Even in a post-apocalyptic dystopia, when the Internet is broken and electricity scarcer than unicorns, the smartphone survives -- albeit only as an unusable brick. Such is the conceit of Edan Lepucki's "California," a novel set roughly 40 years from now in an irredeemably bleak future. But protagonist Frida Ellis doesn't call the machine that she stows away with her other precious belongings a "smartphone" and it bears no identifying brand. She refers to it only as the "Device," an act of naming that reeks of ritual incantation. The Devices in "California" no longer help Frida and the rest of struggling humanity communicate, but they still provide a link to what came before.

The non-functionality of the Device serves in sharp distinction to the role played by a similar smartphone doppelgänger -- dubbed the "Node" -- in another recent dark tale of the near future, David Shafer's "Whiskey Tango Foxtrot." In "WTF," the Node is the delivery vehicle for a different kind of apocalypse, a means by which a dread cabal of industrialists, software tycoons, security contractors and spies aim to achieve total information control over society. The Node is a really killer iPhone. You literally cannot live without it.

Take your pick: smartphone as relic, like the shinbone of some Dark Ages saint, or smartphone as shackle. But either way, there's no escape. The science fiction writer William Gibson told me many years ago that his cyberpunk dystopias should always be read as commentaries on the present. No wonder this summer's wild tales of doom can't let the smartphone go. If the present cannot be conceived without the smartphone than neither can the future.

But why such gloom? Dystopian visions have always been a science fiction staple, but the current foul harvest is hard to square with, say, the enthusiasm sure to greet the iPhone 6 or the ebullience that pours out of Silicon Valley every day, burbling like an uncapped fire hydrant. Presumably, the smartphone has achieved near-ubiquitous adoption because it is useful and makes our lives better -- or at least more convenient. Depending on their degree of libertarian utopianism, today's tech moguls, from Jeff Bezos to Sergey Brin to Mark Zuckerberg, profess profound faith that our new networked technologies will help us fix a broken world, and liberate us all from oppression.

And yet, here is "California," a future where everything is broken. And here is "Whiskey Tango Foxtrot," a future where the smartphone is the final instrument of totalitarian oppression. The two strains of dysfunction are quite different. In "California" nothing works. In "WTF" everything works too well. But both books speak to a deep unease about the present moment, a sense that despite all our amazing technological progress, something is wrong.

So what's the problem?

While reading "California" and "Whiskey Tango Foxtrot" back to back last week, I amused myself by imagining the anger and frustration the books would inspire in Marc Andreessen, the venture capitalist who has become one of the most forceful rhetoricians of Silicon Valley triumphalism. It wouldn't be long, I reckoned, before Andreeseen was hurling "California" at the wall. (WARNING: Do not try this with a Kindle!)

Edan Lepucki's California doesn't look anything at all like Marc Andreessen's California. Even worse, there's no real explanation of why society collapses in the book. Some combination of climate change-induced weather disasters, horrific earthquakes, peak-oil fossil-fuel depletion, and increasing polarization between the haves and have-nots conspires to mess everything up. In "California," the pristine Silver Lake Reservoir in Los Angeles is now a dump.

[T]he homeless, rising in number, often used it a a toilet, and people said corpses were buried under all that trash: the rusted-out carts and car parts, the gutted desktop computers, and the hundreds of plastic bags, porous with holes, swollen with brown rainwater, hanging from orphaned tree branches.

Lepucki's multiple-disaster scenario doesn't jibe well with Andreessen's "age of wonders" gospel. It's a vision of the future in which technology does not get us through the bottleneck of overpopulation and constrained resources, a vision that negates the "progress" made by the globe since the Industrial Revolution, progress that, as far as Silicon Valley is concerned, is now accelerating at light speed.

"Whiskey Tango Foxtrot," I'm sure, would inspire an even deeper, more fretful irritation. "WTF" extrapolates directly from the abuses of privacy and surveillance we already know are happening all the time, committed by both governments and businesses. The book ventures into truly terrifying territory when it imagines that our technologies of connection will be deployed to brainwash us more effectively than a Mao or Stalin or Sarah Palin could ever have dreamed of.

Is that really so much of a stretch? Facebook and OkCupid are already manipulating our emotions and steering our news feeds in directions that suit their corporate purposes. Imagine what these companies could achieve when our interfaces with the digital world plug directly into our brains or optic nerves? The blurb on the back of "WTF" that describes the novel as "what a brainstorming event between Thomas Pynchon and Edward Snowden would deliver" hits the bull's-eye. The ease with which technologies of connection can become technologies of control is much scarier than the possibility of widespread systemic collapse. It seems more likely. This is the concept of "phone zombies" made realer than our nightmares.

It's tempting to wonder whether the discontent that seethes in "California" and "Whiskey Tango Foxtrot" is a canary-in-the-coal-mine danger signal from a creative class that feels threatened by technology's rise. I for one would likely never have heard of "California" had Stephen Colbert not made the book a pawn in the ongoing war between Hachette and Amazon. After Colbert urged his viewers to buy the previously unknown "California" directly from Powell's Books in Portland, Oregon, sales of the book shot up and widespread news coverage followed.

Huh -- a book about the collapse of civilization benefits from a fight with Amazon, a company that many writers (though definitely not all) regard as a serious threat to their livelihoods.

The irony is that Bezos is only one or two steps removed from one of the characters in "Whiskey Tango Foxtrot," the "squillionaire" CEO of SineCo, James Straw.

SineCo manufactures the "Node." Amazon, of course, recently rolled out its Fire Phone, a device designed to make buying via Amazon the easiest, most convenient thing in the world. The Fire Phone encourages a kind of connection specifically suited for fulfilling Amazon's corporate goals. Is this really a device that liberates -- that fixes -- a broken world?

I do not mean to downplay the intrinsically amazing things we can do with these phones. I can Skype with my daughter in Senegal while contributing to the medical care of kids in Nepal or the cost of dental care for the homeless in San Francisco. And I have empathy for the tech titans who wonder why there is so much carping about the potential downsides of technology that the world is universally embracing, and very few people would willingly give up.

Maybe the problem here is that the future has arrived faster than we expected, and it's proving difficult for us to come to terms with. Previous science fiction dystopias seemed impossibly far away. We pondered their threats with ironclad suspensions of disbelief. But now we're here, with autonomous drones committing murder across the globe, our every moment tracked and stored and analyzed, self-driving cars waiting to whisk us away. In great moments of transition like the one we're currently living through, there's really no telling how it will all play out in the end. Artists, by nature, are nervous people. We look at our smartphones and quail at the thought that these indispensable devices, these supremely powerful connecting nodes, might be the instruments of our destruction. So we write our nightmares down, in the hopes that making our fears explicit will help us fend them off.