Takeaway from secret panel on outreach to women, Latinos and youth? Dems should fear Koch money, but not messaging 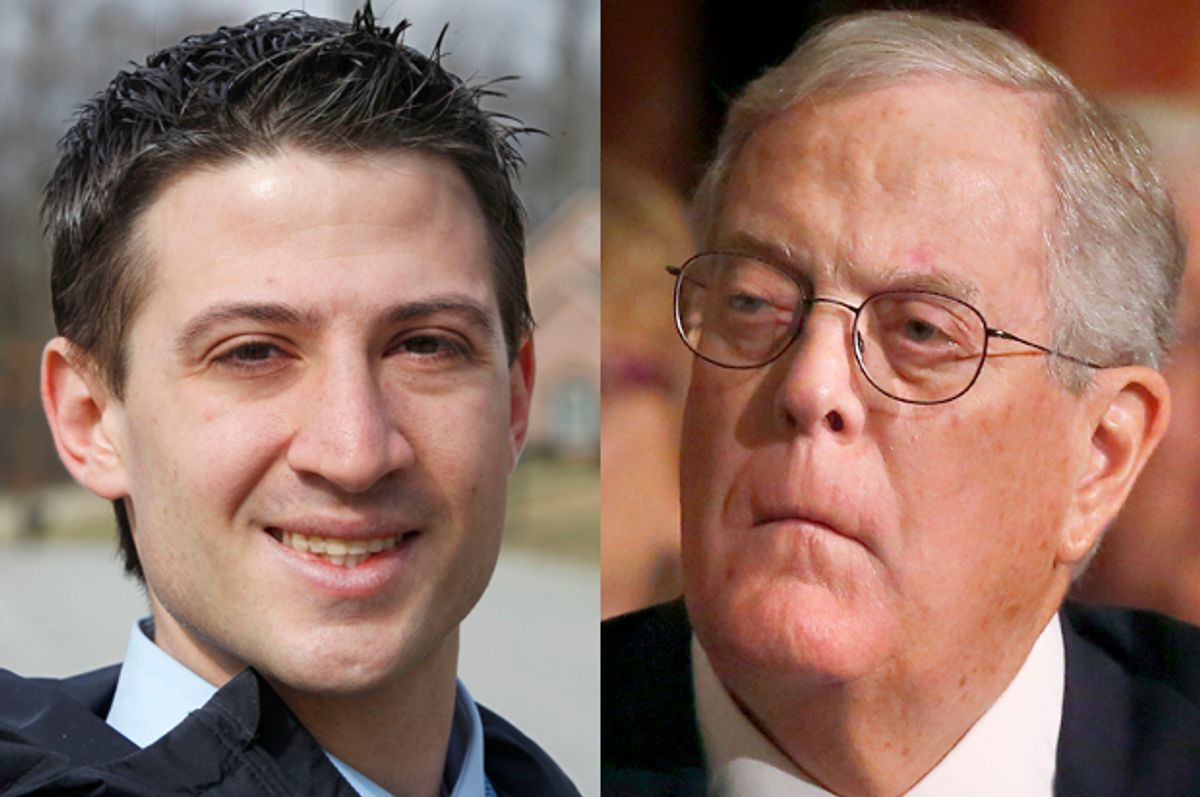 A series of leaked panel discussions from the Koch brothers’ June retreat shows that their right-wing donors network is focused on a GOP takeover of the U.S. Senate, and the 2014 midterms generally. But a parallel tier of programming during the lavish weekend advanced the brothers’ newest priority: Reversing Americans’ perceptions that they’re just greedy gazillionaires by repackaging their research and activism as promoting Americans’ “well-being,” not merely free-market fanaticism.

In new audio and transcripts of one retreat panel, obtained by the Undercurrent and provided exclusively to Salon, three Koch-funded activists shared the lessons of using new strategies to promote “well-being” to reach elusive GOP constituencies: young people, Latinos and women. Their remarks were alternately condescending and stereotypical, with the occasional flash of insight that triggered lame political advice.  If their presentations are any measure of the quality of the Kochs’ attempted rebranding, progressives still have to fear the conservative brothers’ money, but their messaging, not so much.

“I have a big surprise for everyone here: Young people like beer,” joked Evan Feinberg of the Koch-funded Generation Opportunity. At least I think he was trying to make a joke. GenOpp is the group behind those “Creepy Uncle Sam” anti-Obamacare ads that backfired against the right. So understandably, Feinberg didn’t mention Creepy Uncle Sam, but bragged about GenOpp’s recent “Free the Brews” campaign, which used his generation’s interest in craft brewing to advance the Kochs’ deregulation agenda.

Feinberg, a former Rand Paul staffer who ran against GOP Rep. Tim Murphy of Pittsburgh in 2012 as a Tea Party Republican (and lost), insists GenOpp is nonpartisan, in order to retain its tax status. But there he was, preening for the Koch network, at a retreat mostly devoted to taking back the Senate, with only GOP officeholders in attendance.

Here’s Feinberg’s whole “Free the Brews” pitch. You’ll see why they pay him the big bucks.

Young Americans are really interested in the craft brewing industry.  In fact, I've got a couple of friends who brew beer in their basement right now.  They'd rather leave their jobs, and become an entrepreneur, and start their own brewery.  It really actually is something that marks our generation.  It's a cultural phenomenon.

We actually did an experiment where we use technology on Twitter.  We wanted to -- overall we wanted to know what do young people care about?  How do they form their communities online?  And so we did a really intense analysis of their Twitter streams.  We found out that craft breweries and craft beer were actually the largest cultural segment in North Carolina.  So we set about to talk about craft breweries because it's what they care about, so we care about it.

Just like a lot of other businesses, it's one that's marked by tons of government regulations, tons of cronyism where businesses are trying to keep the little guy down…So we did a Free the Brews campaign.  It featured young entrepreneurs that we're really supporting and who were really trying to cut through the red tape and get started.  We got hundreds of people into that event.  In Asheville, North Carolina we have over 500 people that we were able to impact through our Free the Brews event.

…We've been able to get tons of these young Americans interested in the ideas of freedom, not because we came through with a really great way to talk about marginal tax rates, but because we were able to talk about freedom and regulation about something that they care about.

Nobody asked Feinberg to define “tons.” Feinberg's career is a case study in the way wingnut welfare creates a culture of dependency, or alternatively, the debilitating effects of affirmative action for white people.

His craft beer remarks let Rachel Campos-Duffy segue into the way her Latino-outreach organization, LIBRE, has worked with GenOpp on the issue of “freeing” food trucks, too. The main area of overlap seemed to be that GenOpp’s targets tend to eat the food – millennials love “having a truck pull up and bring delicious food directly to you,” Feinberg explained -- while LIBRE’s targets tend to make the food. But both groups will benefit if Big Government doesn’t overregulate the growing food truck industry, Campos-Duffy argued. (It's a variation on the right's embrace of Uber, Airbnb and Burning Man.) She explained that LIBRE is working in Florida with “the fast food truck communities” to fight “big government, and cronyism, and over-regulation [of] the little guy.”

Interestingly, Feinberg, Campos-Duffy and Teresa Oelke of Americans for Prosperity, who focused on outreach to women, agreed that Democrats have done a better job of convincing young people, women and Latinos that they care about them. Campos-Duffy framed the panel as showing how Koch activists work to promote the “six components of well-being,” which she defined as “health and environment, living standards, freedom, community, relationships, and peace and security.”

Oelke and Campos-Duffy discussed the challenges in besting the Democrats when talking to women about politics and “well-being.” Oelke explained:

CAMPOS-DUFFY:  That actually reminds me of Michelle Obama.  You know, these young girls were abducted in Africa, and what would we tell (inaudible) bring our girls home.  Now, it didn't do much to help the outcome, but it did (inaudible) some goals, that she cared.  And that's what Democrats want to do.  That's what they care about.  That's their goal.  They want to help.  And so on the right, we want (inaudible).

OELKE:  We have to do a better job of selling our motivations and what motivates us.  You know our activists, they do care.  The people in this room, they do (inaudible).  They want these people to have an opportunity to move from poverty to prosperity.  That's what drives us.

Yet many voters distrust Republicans, the three admitted – and little or nothing they shared with the group is likely to change anyone’s minds.

Campos-Duffy said that LIBRE chapters are helping open baseball fields to the community, and partnering with H&R Block to assist people in filling out their tax returns. That’s nice, but nobody asked her if they are helping any of them claim the earned income tax credit, a formerly Republican idea now repudiated by most of the party as leading to the problem of the “47 percent” who pay no taxes.  Oelke described seminars that help would-be entrepreneurs with business budgeting and tax licensing problems.

All of these efforts, Campos-Duffy explained, “help us to demonstrate our goodwill, that will sort of help show that we care, and show how we can depend on each other and not (inaudible) for everything on the government.” Sounds good. But then she noted that everyone “saw what happened in Katrina when people relied solely on the government” – a rather condescending take on the suffering of poor people who were abandoned when the Bush administration failed at what even conservatives normally acknowledge as a basic function of government: help in a natural disaster.

Unbelievably, Oelke bragged about how AFP, which lobbies against environmental regulation, helped to provide bottled water after a chemical spill in West Virginia’s Elk River. “That's how Americans for Prosperity Foundation was introduced to the community,” she kvelled, “because we were there for them, and we were invested in what mattered to them.”

To be fair, though, AFP’s candidate is winning in the West Virginia Senate race, since anti-environmental regulation messaging always plays well there, anyway. Sending bottled water to a community coping with corporate poisoning might not be effective “outreach” in many other places.

The Kochs may eventually win over some skeptics with their emphasis on “well-being,” and their efforts to mute their self-interested neo-feudalism. But if their June retreat panel is any indication, they’ve got a lot more work to do on messaging. The panel closed with a shout-out to Campos-Duffy's husband, GOP Rep. Sean Duffy -- the pair are veterans of MTV's "Real World" -- for sitting in the audience and taking care of his own children on Father's Day, while his wife tried to save the world.