Being annoyed with a defendant is not a proper use of an electronic device. But check out these instances 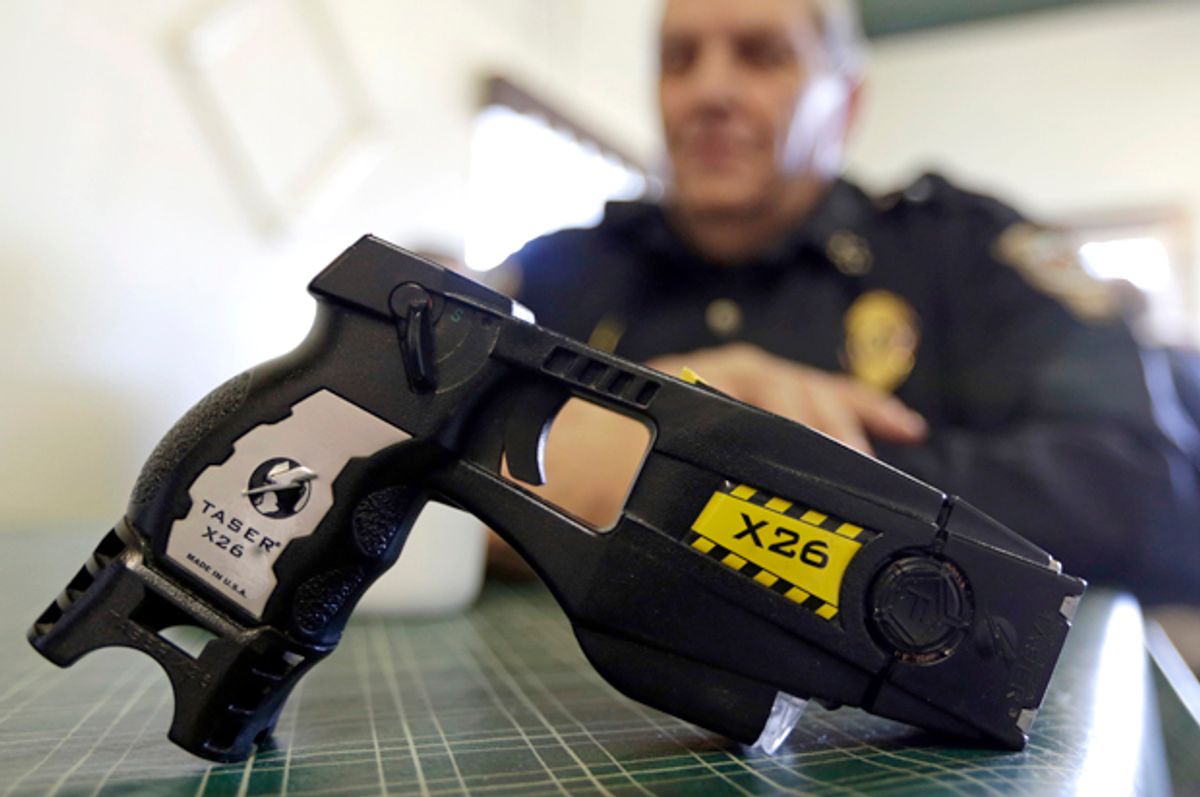 “… principles of common right and common reason are …” King said.

That's a passage from a transcript of a trial in a Maryland courtroom last week in which a judge ordered a deputy sheriff to administer electroshock to a defendant who was representing himself in a case before him. The defendant was not charging the bench or threatening violence in any way. He was simply saying things the judge did not want to hear.

For unknown reasons, this defendant had been outfitted with an electronic device, presumably something having to do with the fact that he was representing himself and would be moving freely about the courtroom. When he asserted some dicey "sovereign citizen" legal doctrine, the judge told him to stop and when he didn't, the judge ordered the deputy to shock him. He fell to the ground, screaming in pain, and after he was calm a medic was called to make sure his vital signs were OK. Then they went back to jury selection as if nothing had happened. The defendant, as you might imagine, was somewhat subdued after the electroshock treatment.

As with so many incidents of official violence against citizens, there is no way of knowing how often judges are using electroshock in their courtrooms.  But there are other known cases.  This one from 2004 was especially disturbing. It featured a former professor of political philosophy and jurisprudence who was representing himself before a Utah judge. The man suffered from mental illness, a fact known to the judge since he had granted one of the defendant's motions under the American With Disabilities Act.  When the defendant became agitated and muttered the word "bullshit" the judge told the bailiffs to "cool" him off.  They shot him through with 50,000 volts:

The plaintiff’s state of agitation was caused by his mental disabilities. The deputy sheriffs’ approach only caused the situation to escalate. As five or more Salt Lake County deputy sheriffs/bailiffs seized Lowery from behind, he shouted, “I am cooled off; I deserve to be heard­­— I deserve to be heard­­, your Honor, and you are violating my access to due process at this very moment. I am not violent and—“

Judge Quinn interrupted him with ordering the bailiffs to take Dr. Lowery to a holding cell. A split second later—unclear whether following the judge’s orders or acting on his own accord, a bailiff sent 50,000 volts of incapacitating electricity into the lower back of the unsuspecting professor. As the courtroom video shows, nothing in Dr. Lowery’s behavior suggests that the bailiffs had any reasonable motive to believe they or the judge were in physical danger.

Yet the taser gun fired more than once.

The repeated electric shocks blew Dr. Lowery over the podium, and he landed face down on the floor, with two bailiffs on his back. The electric blasts caused Dr. Lowery’s bowels to empty twice. He screamed, “Help me!” while he complied with a bailiff’s order to stay on his belly, neither capable nor willing to offer resistance. Then, suddenly, he went unconscious.

Authorities are particularly prone to tasering the mentally ill. They can be awfully annoying, after all.

Regarding the case last week, David Rocah, senior staff attorney for the Maryland ACLU, told the Baltimore Post Examiner that the use of an electronic device must be ordered by a judge and it's unknown which judge ordered it. But regardless of the reason for it, as Rocah points out, “Its use is limited to extreme situations,” Rocah said. “It’s not proper to use it just because a judge is annoyed with a defendant. It’s not a torture device to make defendants more compliant. It’s not a device for summary punishment.”

There are a whole lot of police officers and other government officials who would take issue with that. Indeed, that seems to be the primary reason they are being used. According to experts like the St Louis police chief who told CNN last week that a taser couldn't have been used in the notorious Kajieme Powell case because "tasers aren't 100 percent; that's what guns are for," the idea of using them in place of deadly force, as they were advertised to do, is not operative. Still, using them in courtrooms to shut up a defendant who is representing himself and is saying things the judge doesn't like seems excessive, even in our torture-friendly nation. After all, the Constitution guarantees your right to represent yourself in court and judges simply  have to deal with that inconvenience from time to time.

There are actually good reasons to use tasers in courtrooms. They are crowded with people and if someone becomes violent or tries to escape, a taser makes much more sense than releasing a hail of bullets to stop them and endangering innocent people. Presumably these electronic devices serve a similar purpose. However, a defendant refusing to be quiet or asserting an obscure and irrelevant legal theory is not a violent act. Yet authorities from the very top to the bottom of the criminal justice food chain seem increasingly to believe they are entitled to use electroshock to hurt anyone who speaks in a way that offends them and coerce compliance.

Judges, in particular, have tremendous power over everyone appearing before them, not the least of which is the ability to hold people in contempt and send them to jail for failing to show proper decorum. Torturing someone with electroshock on command, however, is not among their prerogatives. At least it didn't used to be.

Oh, and lest you think that this particular sovereign citizen was of the Cliven Bundy variety, this is what he looks like.