Where right-wing lies are born: The wingnut Web, WorldNetDaily and how conservative nonsense infects America 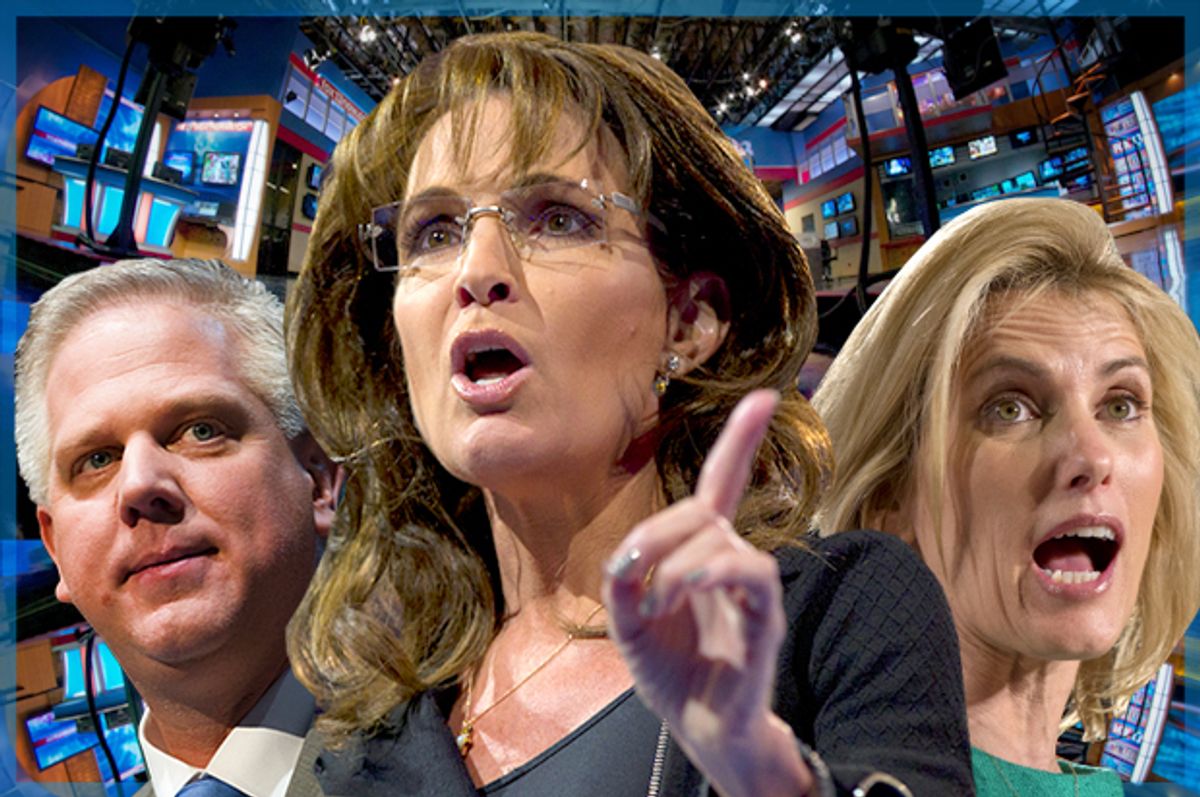 Excerpted from "Wingnuts: Extremism in the Age of Obama"

Harry Truman used to say that “the only thing new in the world is the history you don’t know.” Harry Truman never met the Internet.

The Internet is a force multiplier for Wingnuts, empowering them to reach far broader audiences faster than ever before. It is the best breeding ground for every imaginable conspiracy theory. It provides a national megaphone for what in earlier years might have been just a whisper campaign. It enables likeminded individuals to ignore their isolation and come together as an opinion army.

While the right was dominating talk radio, the left rallied its partisans through the Internet. Within a few years, groups like MoveOn.org and blogs like Daily Kos went from being outside agitators to inside players. Their fund-raising powers and ability to fire up activists were too impressive for the Democratic establishment not to forgive and forget their outbursts of radicalism: MoveOn’s infamous “General Petraeus or General Betray Us?” ad and the comments of Daily Kos founder Markos Moulitsas after the killing of four military contractors in Iraq. (“I feel nothing over the death of mercenaries . . . They are there to wage war for profit. Screw them.”)

The GOP was slower to adapt from the AM dial. There were popular and influential conservative news aggregators like the Drudge Report that filtered the news through a subjective lens, but there was initially very little in terms of effective online activist organizing. During the 2008 campaign, I’d been told by a conservative strategist that “our voters don’t use the Internet”— while he was surfing the Web. The McCain-Palin campaign seemed to take that advice to heart (no doubt under the influence of the direct-mail mandarins who’d made their fortunes while building the conservative movement). Republicans even sent out a fund-raising letter designed to look like an emergency telegram—the instant message of the horse-and-buggy era—two years after the last real telegram was sent by Western Union. They looked like the Party of the Telegraph.

But after the election, grassroots conservatives woke up to social media and the Internet. They were energized by being in the opposition—supplementing their talk-radio diet with Twitter, the social networking service that pushes text messages of 140 characters or less. Ironically, McCain—whose campaign hadn’t collected cell phone numbers for text messaging during the campaign—created his own Twitter account three days after the election, and ten months later had 1 million followers. By mid-2009, there were twice as many conservative congressmen on Twitter as Democrats, and Sarah Palin was using her Facebook page as her primary means of communicating with supporters. The Tea Parties and town hall protests were organized online, and with an assist from Fox News’s pre-game promotion, they started to feel like populist uprisings.

This conservative netroots revolution is an evolutionary leap—a higher degree of specialization—beyond the niche partisan network approach innovated by Roger Ailes at Fox News. Now what conservatives dismiss as “mainstream media”—because it does not reflect movement politics—can be completely bypassed. You can have news tailored to fit your beliefs and chat with like-minded activists. The logical conclusion is already upon us: conservatives trying to create their own online encyclopedia, an alternative to Wikipedia known as Conservapedia. It’s the actual expression of what Stephen Colbert only joked about when he denounced reference books as “elitist—constantly telling us what is or isn’t true or what did or didn’t happen.”

In the isolation of the echo chamber, the influence of fringe news sites is increased, and the tallest midget in that corner of the Wingnut world is WorldNetDaily. It was the brainchild of Joseph Farah, a mustachioed longtime newspaperman from Paterson, New Jersey, turned outer-limits conservative activist. Farah was a generation older than most Internet entrepreneurs, but as editor of the Sacramento Union in California, he’d gotten to know the Silicon Valley crowd and saw the news potential of the evolving medium. Farah convinced his friend Rush Limbaugh to pen front-page columns for the Sacramento Union. But it was too late for the Union; circulation continued to decline and the paper soon shut its doors. Subsequently, Farah embarked on a career as a Clinton critic from the perch of the Western Journalism Center, funded by Richard Mellon Scaife (and including the then-conservative Arianna Huffington on its board of advisers).

At the time, right-wing opposition to Bill Clinton was still essentially an analog event, pumped out over radio, magazines, direct mail, and videotapes that purported to offer evidence of rape, murder, and drug deals perpetrated by the forty-second president. While repeatedly “investigating” a conspiracy theory that longtime Clinton aide Vince Foster had not committed suicide but had been murdered with the White House’s knowledge—a theory determined to be false by three official reports—Farah began aggregating anti-Clinton articles on a site called eTruth.com. He upped the ante in 1997 with the launch of WorldNetDaily with his wife and quickly claimed to have 10,000 visitors a day.

Twelve years and two presidents later, WorldNetDaily established itself as a clearinghouse of right-Wingnut information and paraphernalia with twenty-five employees. Visitors spiked in the wake of Obama’s election. Farah claims an impressive 6 to 8 million unique visitors a month, and millions in annual sales from its superstore, peddling books like Muslim Mafia and $80 jars of earth from Jerusalem’s Temple Mount, while offering special departments for Tea Party paraphernalia. There are gimmicks to trade on voter anger, like a “pink slip” you can send to every member of Congress for the discounted price of $29.95, and a lawn sign that says, “America was founded by Right-Wing Extremists.”

The gear may be profitable, but it’s the stories that keep people coming. With its blurring of news and opinion, WorldNetDaily draws a devoted audience, claiming credit for breaking the Obama–Bill Ayers connection, Hamas’s alleged endorsement of Obama, and investigations into Obama’s Chicago church. Some of its stories are picked up by other conservative outlets quietly and not a little shamefacedly because of the sub-tabloid reputation of the outfit. (“Glenn Beck was reading WorldNetDaily copy without attribution, and that’s how he ended up claiming the scalp of Van Jones,” Farah told me.)

But aspirations to credibility are diminished with stories about H1N1 microchip implants62 and Federal Emergency Management Agency (FEMA) concentration camps, leading to nicknames like WorldNutDaily. And for all the biblical beliefs professed on the site (such as Creationist-inspired stories that try to debunk ideas that fossil fuels came from fossils) and strict stands against pornography, there is preoccupation with proving Democratic opponents are secretly gay.

The site repeatedly published a thoroughly discredited drifter’s claim that “he took cocaine in 1999 with the then Illinois legislator [Obama] and participated in homosexual acts” with him and regurgitated bilge about Hillary Clinton’s “well-known bisexuality and her lesbian affair with her beautiful assistant.”

All in all, it offers a relentlessly grim prognosis for America short of the Second Coming (predicted for 2015), full of plans for Obama to bring back “inquisitions” and “destroy capitalism.”  No wonder its primary advertiser appears to be a marketer of “survival seeds” for your very own “crisis garden” and a “crisis cooker” to “prepare hot meals when the power is off.” They are profiting off the paranoia they intentionally inflame in their readers.

But the real growth industry for WorldNetDaily in 2009 was the enthusiastic advocacy of Birther claims that Obama was not born in the United States and is therefore ineligible to be president. Farah rented twenty roadside billboards that read, “Where’s the Birth Certificate?” at a cost of $300,000 and collected online donations to help fund the effort. A WND-produced DVD, A Question of Eligibility, documents the claims of Birther proponents, including Alan Keyes and Orly Taitz, but darkly states that credits for the movie are being withheld by the filmmakers because “they fear reprisals from their government.”

Farah sees himself as an old-school newspaper editor rather than a partisan advocate. He claims to take a disinterested view of the op-eds on his home page. “You ought to see some of the wacky stuff that they write. Doesn’t mean I agree with it,” he told me. “I don’t even look at the columns before they get published in WorldNetDaily. We have a commentary editor who does that . . . I don’t even read most of the commentary in WorldNetDaily after it’s published ’cause I’m not a commentary kind of a guy, to be honest with you.”

His own commentaries, however, are a different matter, and they do not pretend to be the work of a journalist aiming for objectivity. Instead, the political and the religious are often entwined with a relentlessly hostile view of Democrats in general and President Obama in particular. On Inauguration Day, for example, Farah offered readers a specially written prayer for the president’s failure: “I do not hesitate today in calling on godly Americans to pray that Barack Hussein Obama fail in his efforts to change our country from one anchored on self-governance and constitutional republicanism to one based on the raw and unlimited power of the central state. It would be folly to pray for his success in such an evil campaign. I want Obama to fail because his agenda is 100 percent at odds with God’s. Pretending it is not simply makes a mockery of God’s straightforward Commandments.”

At the end of Obama’s first year, did Farah agree with the calls to impeach Obama that are advertised on his site?

I ask whether he worries that WND’s stories could provoke an ugly response from an unstable reader. His response:

I think the media establishment should ask themselves that question. When they see hundreds of thousands of Americans rallying in Washington and call it tens of thousands and ignore grassroots protest movements around the country, they are doing a disservice to a vibrant debate in a free republic. They are promoting other methods for grievances to be addressed. There are only a few other possibilities—peaceful civil disobedience is one, and violent force is another. I believe reporting events accurately is the best protection of a vibrant debate in a free republic. Covering up events and silencing voices is much more irresponsible and dangerous.

Farah doesn’t deny that WND’s stories add to the heat on the Wingnut street but says, “I don’t think anger is necessarily an all bad thing. We should be angry at Hitler. We should be angry at Charles Manson.” But what about when people start comparing President Obama to Hitler? I ask. “Well, if the analogy fits, it would be irresponsible not to make it,” he replies. “Obviously, you can’t compare him to Hitler’s genocidal Holocaust policies, right? He hasn’t done anything remotely resembling that. But I think it’s fair to point out that Hitler nationalized health care and that Stalin did that and Hugo Chávez did that and Fidel Castro did that.”

For WorldNetDaily and others on the Wingnut Web, extremism in defense of liberty is no vice.

Excerpted from "Wingnuts: Extremism in the Age of Obama" by John Avlon. Published by Beast Books. Copyright 2014 by John Avlon. Reprinted with permission of the publisher and author. All rights reserved.