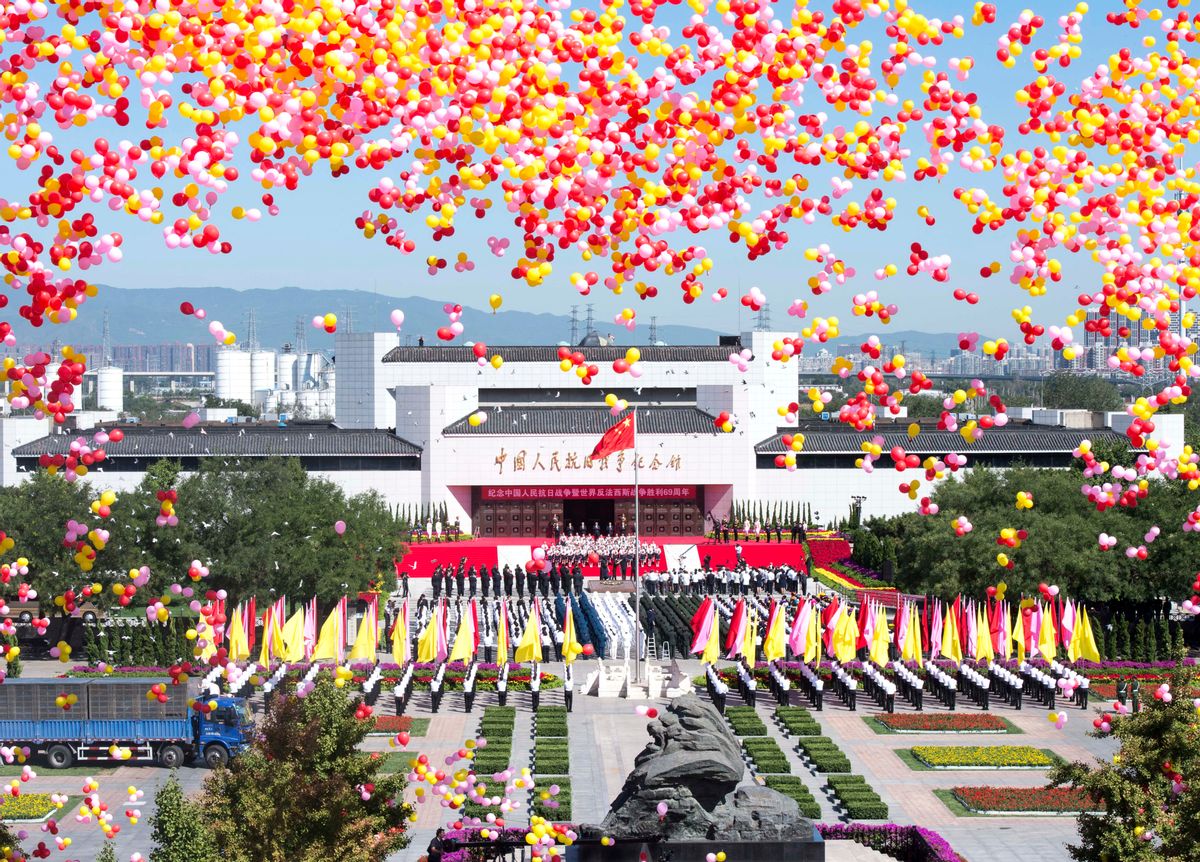 It was China's first such celebration of a newly formalized historical commemoration day to mark Japan's surrender to U.S. forces in the Pacific — 69 years after the event. From now on, Sept. 3 will be marked annually in China as the Victory Day of the Chinese People's War of Resistance Against Japanese Aggression.

Pairs of soldiers carried shrub-sized bouquets into a Beijing museum commemorating the war while solemn music played at a ceremony attended by top leaders. Inside, Xi adjusted ribbons on the bouquets, which were placed to honor Chinese soldiers who fought against Japan after it invaded China in 1937. Afterward, he led the applause as thousands of doves were released, intended to show China's wish for world peace.

China's angry rhetoric about Japan spiked two years ago when Tokyo nationalized a group of East China Sea islands also claimed by China, and has been exacerbated since then by Japanese politicians' visits to a Tokyo shrine honoring war dead and remarks seen as minimizing Japan's war guilt.

In response, Beijing has accused Japan of renewed militarism, and has sought to revive memories of the war to drive home the point. China this year created three annual commemorations aimed at focusing attention on Japan's wartime aggression and atrocities, also including a Martyrs Day on Sept. 30 and a Nanjing Massacre Victims Day on Dec. 13.

"We want to make sure that such aggression will never happen to China and to any other country," Victor Gao, a former Chinese diplomat, told state broadcaster China Central Television.

"Only by ... remembering history can we achieve this goal, because otherwise if we let the politicians in Japan, in high offices of the government, do what they want, history will be rewritten and people will have the wrong conclusion as to who was the oppressor," Gao said.

Chief Cabinet Secretary Yoshihide Suga also said Japan's post-war development as a pacifist nation is well-recognized internationally, and that his government hoped the two countries could deepen their cooperation.

Nearly seven decades after the war's 1945 conclusion, China and Japan are now linked by billions of dollars in trade, investment and aid, but tensions have risen as both nations build up their militaries and accuse each other of growing assertiveness, including in the disputes over the islands, known as Diaoyu in China and Senkaku in Japan.

The commemoration activities, broadcast on state television along with interviews with Chinese recollecting their experiences of the war, are expected to sharpen anti-Japanese feeling in China, where the Communist Party uses nationalism to shore up its rule.

Authorities have ordered TV stations to air shows with anti-fascist and patriotic themes in prime time from Wednesday until the end of October, according to local media reports. Such shows typically feature communists fighting Japanese and developing close ties with victimized villagers, as well as Japanese soldiers carrying out brutal acts.

"China works really hard to keep this issue alive," said David Zweig, professor of social science at Hong Kong University of Science and Technology. "It's a way of pressuring Japan. Some people probably really fear that there's a generation of Japanese who don't want to remember what Japan did in China, so China wants to keep it alive and they want to teach their own people a certain mistrust of Japan."

Relations between the two Asian economic giants may have a chance to improve if Xi and Japanese Prime Minister Shinzo Abe get to meet during the Asia-Pacific Economic Cooperation summit in Beijing in November — which would be the first talks between the two countries' current leaders.

"If they meet and have a good meeting at APEC, maybe that can move forward, but this really takes leadership," Zweig said.