"I just found it really embarrassing": The despicable antics of a Tea Party hero 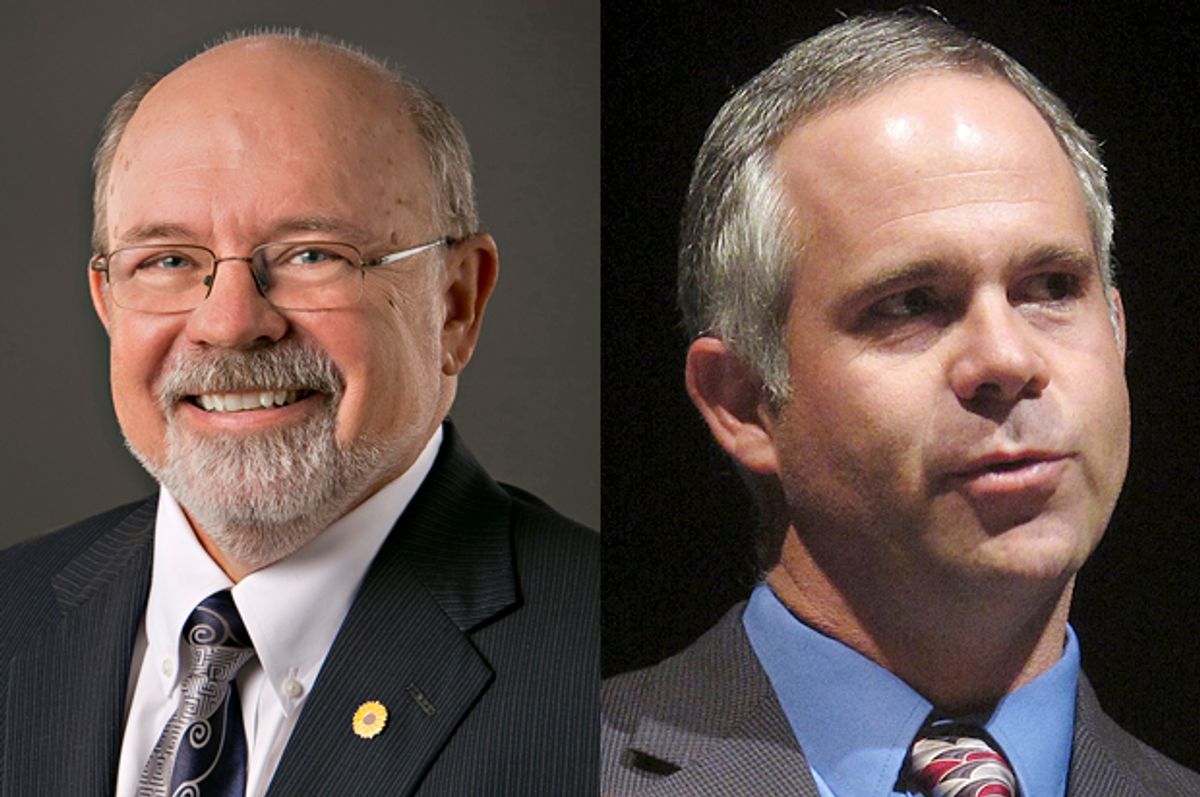 He doesn't get as many headlines at Salon and other left-of-center news sites as fellow House Republicans like Steve King or Michele Bachmann, but when it comes to representing the eccentric and far-right populism that's come to dominate American politics since the rise of the Tea Party, Kansas Rep. Tim Huelskamp is pretty hard to beat. (The fact that Huelskamp's only been in Congress since 2011, but has a Right Wing Watch tag that goes four pages deep, should give you a good sense of what we mean.)

Thing is, despite his often extreme rhetoric and decidedly out-of-the-mainstream perspective, Huelskamp is a Republican in deep-red Kansas, arguably the most right-wing state in the country, a place where the politics of conservative resentment became so overwhelmingly and unstoppably powerful that some guy even wrote a whole book about it. He won with about 74 percent of the vote in 2010; and in 2012, after voters had had plenty of time to see his work in-office, a single opponent for Huelskamp was nowhere to be seen.

It looks, however, like Huelskamp may face the biggest challenge of his political career in 2014. Jim Sherow, a former mayor of Manhattan, Kansas, is running against him as the Democratic Party's nominee, and is running a campaign premised around focusing on local issues to win over GOP-leaning voters who would usually reflexively support the Republican Party candidate. Salon recently called up Sherow to discuss his campaign, his opponent and what compelled him to throw himself into such a challenging race. Our conversation is below, and has been edited for clarity and length.

You're running as a Democrat in blood-red Kansas, one of the most conservative states in the country. What made you want to assume responsibility for such a massive undertaking?

That’s a really good question. It’s a question that my wife first asked me when I was thinking about wanting to run.

I served as a city commissioner and mayor of Manhattan, Kansas, for six years, and I came to understand what it takes to make an economy work. What I saw Representative Huelskamp doing was taking positions, following policies, taking stances, that simply were not working in the best interests of the nation.

Part of it was the government shutdown that cost the economy $24 billion ... He was the one responsible — he and like-minded people [were] responsible — for doing it. My term as a city commissioner and mayor taught me how important it is to have representatives in Congress whom you can work with, who know your interests and are there to help you. And we simply have a representative who isn't doing that.

So was it something you were considering before the shutdown, or was it more that the shutdown compelled you to get involved?

It’s the latter. When I thought about how the real interests of the United States were being represented — or in this case not being represented — I just found it really embarrassing. And then once he was also kicked off the [House] Ag [Agriculture] Committee and the [House] Budget Committee by his own party leadership; I mean, in what way are the interests of the 1st Congressional District of Kansas being represented? My conclusion was: They’re simply not. There’s no way a congressman in his situation can adequately address the needs of the 1st District.

Are you hearing reflections of Huelskamp's icy relations with the GOP in D.C. reflected in how Republicans back home in Kansas talk about him, too?

I think a lot of Republicans are beginning to think his representation of the state is hurting it. I’ve heard from a great many.

The reality of it all is, in a district that is overwhelmingly Republican in terms of voter registration, [a Democrat is] going to need [conservative] support in order to win. There’s no question about it. If I were running against a moderate Republican, there would be no way in a district like this that I think I would have a good chance of winning. But that is not the case here.

In terms of getting Democrats' support, have you been receiving much from the Democratic Congressional Campaign Committee?

I know that my campaign has had kind of indirect communications with the DCCC. Nothing direct yet. And if you’re asking about whether or not I’ve received support from the DCCC, no direct support yet.

Now, would I like to receive the DCCC support? Yes. To put our campaign just across the top, not only will it take support like [that of the] DCCC, it will take support from farmers, teachers, ranchers, healthcare workers and people across the entire district who are being affected by Huelskamp’s lack of representation.

Some of the other candidates I've spoken with have described their relationship with the DCCC in pretty strained terms. Have you had any experiences that made you feel like it wasn't always on your side? Encouraging donors to send their money to other races, stuff like that?

I have no clue about that one way or the other.

Rep. Huelskamp has garnered national attention for the intensity of his conservatism on a few issues, but he's probably most well-known for his strident opposition to marriage equality. Have you heard many voters express negative feelings about Huelskamp's views on same-sex marriage, or at least the way he chooses to share them?

He made a statement recently about how women are "desperate" for husbands and how men need to “man up” and marry these desperate women; and that received a lot of backlash. Also Huelskamp isn’t quite in touch with Kansas public opinion on [same-sex marriage]. If you go to a Public Policy Polling poll that was done in February, 40-plus percent of Kansans right now are OK with gay marriage, and only 32 percent are in opposition to the state recognizing a civil marriage or relationship between gays. I think that shows that Huelskamp is even out of step with Kansans in general [on the issue].

How much has the surprisingly intense and growing antipathy for Republican Gov. Sam Brownback played into your campaign? Do you think he and Huelskamp are similar figures?

They’re somewhat similar; both of them are very religious in their approach to politics. But I think Brownback has at times shown a more practical approach than Huelskamp has. In fact, just from Republicans in this district, while they still might support Brownback for governor, they don’t support Huelskamp.

Anywhere else were you think Huelskamp is even less pragmatic than Brownback?

Brownback has taken an interest in water issues, which are critical to the economy of this district. When I talk to farmers and ranchers, they haven’t seen any interest on the part of Huelskamp with those issues.

On the question of the differing levels of pragmatism you see between Brownback and Huelskamp, do you think Huelskamp is anomalous, or do you think the shutdown was a sign of a deeper problem with Republican orthodoxy right now?

What I see and what I hear when I go throughout the entire district is “Why can’t Congress work together and get something done?” And if you have a congressman that seems to be one of the most divisive of congressmen in the Congress, then you have a real problem, both for your state and for the nation.

This is one of the reasons why in the last primary, we saw something very unusual in Kansas politics. First of all, the Kansas Farm Bureau and the Kansas Livestock Association did not endorse Huelskamp in his primary. They did not endorse his opponent; they basically stayed out of it. That’s almost revolutionary in this state.

And the opponent challenging Huelskamp [ran] to the center, rather than to the right (because I don’t know how you can go any further to the right than Huelskamp). He'd only been here in the state for a year, and had never held political office before. And he certainly didn’t have the money that Huelskamp has. [He] challenged a two-term sitting congressman ... and gains 45 percent of the Republican primary vote. Now, that’s unheard of.

So if it's Huelskamp in particular, do you worry that his presence could lead to another shutdown — or just more gridlock, in general?

General gridlock ... What people are beginning to realize is that when you can’t even work with your own party leadership, how in the world are you ever going to work across the aisle to make any kind of compromises that will move any piece of legislation forward?

Do you think Huelskamp's team is taking that realization — and, by extension, your candidacy — seriously?