Pledge of Allegiance freaks defy SCOTUS: Maniacs force others to recite it in public meetings

Supreme Court ruled that you can't be coerced to partake in the pledge. These so-called patriots don't really care 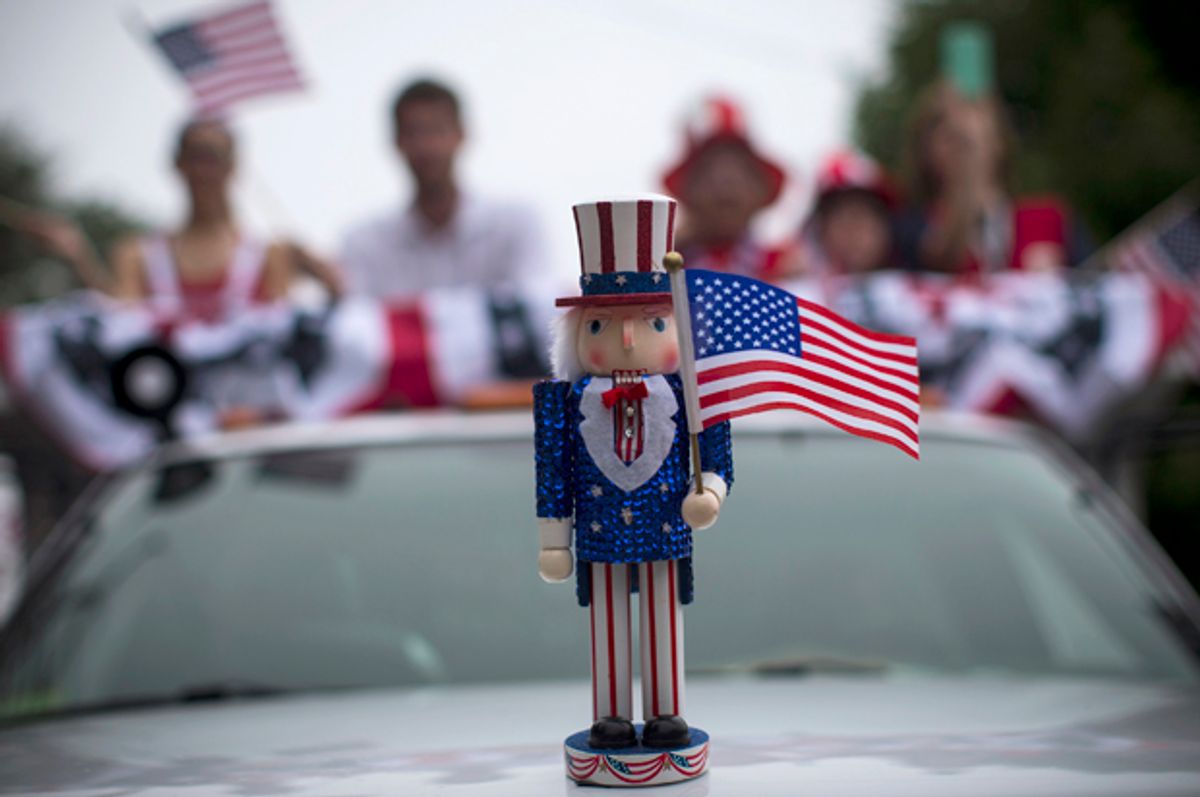 In its recent decision in Greece v. Galloway, a 5-4 majority of the Supreme Court held that public meetings could feature sectarian prayer. According to Scotusblog, this was the holding, in a nutshell:

The town's practice of opening its town board meetings with a prayer offered by members of the clergy does not violate the Establishment Clause when the practice is consistent with the tradition long followed by Congress and state legislatures, the town does not discriminate against minority faiths in determining who may offer a prayer, and the prayer does not coerce participation with non-adherents.

“Ceremonial prayer is but a recognition that, since this Nation was founded and until the present day, many Americans deem that their own existence must be understood by precepts far beyond the authority of government... Absent a pattern of prayers that over time denigrate, proselytize, or betray an impermissible government purpose, a challenge based solely on the content of a particular prayer will not likely establish a constitutional violation.”

So while it may offer sectarian prayer in its invocation the government cannot discriminate against minority faiths and cannot coerce participation. (It's hard to see how they could do any less and remain faithful to the Constitution.) But that ruling doesn't seem to have filtered down to the township level. Just last week, the mayor of Winter Garden, Florida, ordered the police to remove a man from a town meeting for failing to stand for the invocation and Pledge of Allegiance. Here's the video of the event:

(It would be interesting to know why all those men are wearing some kind of uniform, but I suppose that's beside the point.)

The mayor allowed the citizen to remain seated during the prayer but orders him removed when he also declines to stand for the Pledge of Allegiance. The man again asserts his right not to stand and the mayor tells him he must do it or he has to leave the public meeting because it's "just not fair to our troops and people overseas." This isn't a violent or hostile altercation and when approached by the police to escort him out of the meeting (or risk arrest) the citizen leaves peacefully.

The mayor is entirely in the wrong. A citizen has the right under the Constitution in both instances to stay in his chair and refuse to join in these group recitations. In the case of the prayer, as the quotes above show, the court just recently reaffirmed that in spite of its ruling that such prayers could be conducted, no citizen could be compelled to participate.

And in the case of the pledge, it's rather shocking that anyone in politics even at the local level would be unaware of the legal history attached to it. More than 70 years ago the court ruled that Jehovah's Witness students could be compelled to recite the pledge even though their religion forbade it. The violence and intimidation toward the Jehovah's Witnesses that followed forced the court to reconsider two years later in 1942 and the court reversed itself.  (Interestingly, the original pledge featured what we now know of as a Nazi salute. The salute was changed to the palm over the heart gesture in 1942 -- for obvious reasons.)

But this issue continued to be controversial. Indeed, you only have to go back to 2005 to see another case in Florida in which a teacher forced a child to say the pledge despite the fact that she knew he was a Jehovah's Witness. Salon covered the story at the time.  The teacher claimed that she was only showing the child how people said the pledge and explained that it was a social studies issue. She testified that when she said to the class,  "If you can't put your hand on your heart you need to move out of the country," she was speaking of terrorists "like 9-11" because they wouldn't say the pledge so they should go back home. The school district didn't buy it and suspended the teacher.

And litigation over the pledge after 9/11 was very active all across the country.  There was the famous Newdow case protesting the inclusion of the words "under God," which the Supreme Court rejected on technical grounds after the 9th Circuit held that the words violated the Constitution. But there were other cases as well.  The atmosphere around the pledge was so frenzied that a 2006  bill called the "Pledge Protection Act," which passed the House of Representatives, was intended to permanently deny the judiciary the right to decide Pledge of Allegiance cases. (The Senate never took it up and it died -- thank goodness.)  In what was obviously a symptom of the patriotic fervor that seized the nation in the wake of the terrorist attacks on the World Trade Center various cases of teachers berating students for failing to take the pledge resulted in lawsuits in states across the country. Apparently these feelings are still running high in places like Winter Garden, Florida.

It's useful to recall that the case that reversed the original decision that the state could compel the Jehovah's Witness students to say the pledge featured a very famous declaration by Justice Robert Jackson's in which he said:

"If there is any fixed star in our constitutional constellation, it is that no official, high or petty, can prescribe what shall be orthodox in politics, nationalism, religion, or other matters of opinion or force citizens to confess by word or act their faith therein. If there are any circumstances which permit an exception, they do not now occur to us."

That was at the very height of World War II, December of 1943.  If that was not a circumstance that permitted an exception it's very hard to see what could possibly be one in this day and age. Certainly, being "unfair to the troops and people overseas" wouldn't qualify.