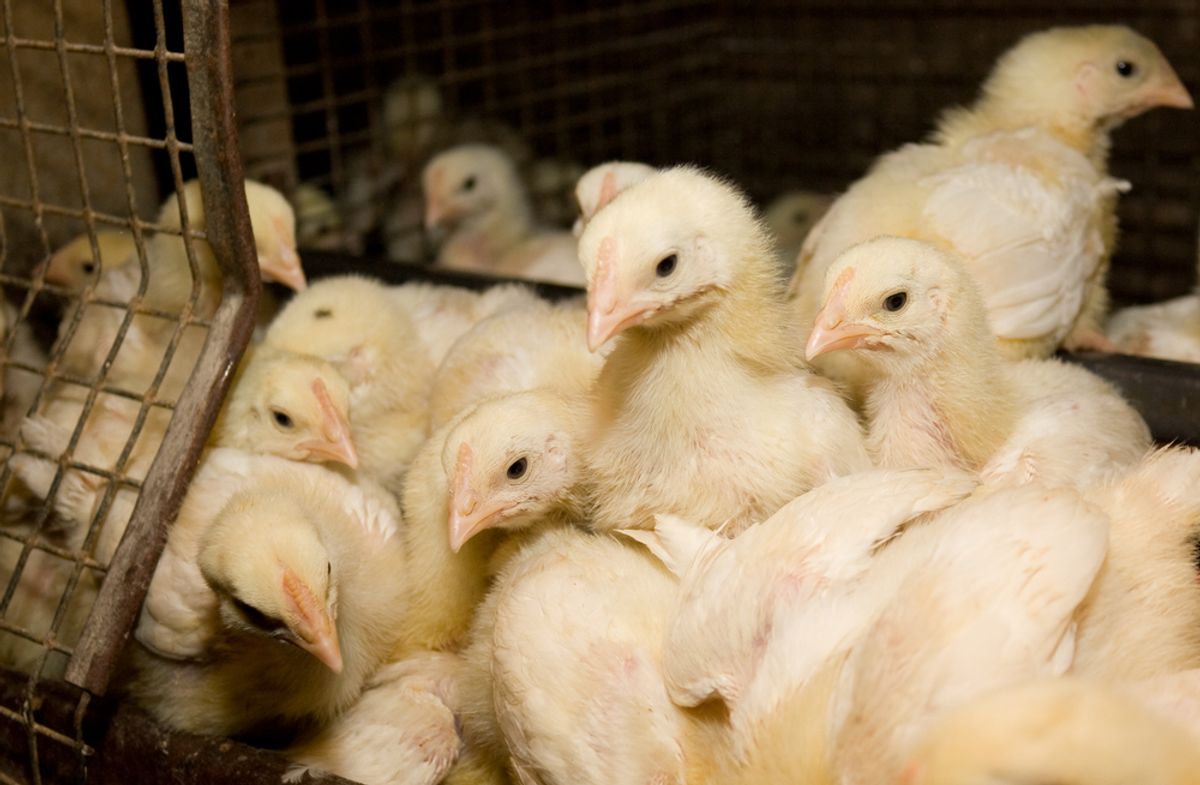 Perdue farms, the country's third-largest poultry producer, announced Wednesday that it's eliminated the use of antibiotics in hatcheries. This is a major step forward: The use of an antibiotic called gentamicin in about-to-hatch eggs is so widespread in the industry that even "organic" chickens are often treated with it.

"Across our company," Perdue explained in a statement, "95 percent of our chickens never receive any human antibiotics, and the remainder may receive them only for a few days when prescribed by a veterinarian."

As part of our animal welfare commitment, should animals become ill – including organic and no-antibiotics-ever – they will be treated as medically appropriate. However, if antibiotics are used, those animals are not marketed as no-antibiotics-ever or organic. In those rare cases, federally mandated withdrawal periods ensure products are free of antibiotic-residue as defined by the USDA.

"It wasn’t easy," company chairman Jim Perdue told reporters, "but we found along the way that we could raise healthy chickens with fewer antibiotics.” The process of eliminating antibiotics from its 15 hatcheries, as recounted by NPR, was in fact a 12-year ordeal. The price of a safer food system, along with changes made in the chickens' diets, could mean costlier meat for now, warned Perdue. But as consumers demand more antibiotic-free and organic poultry, he added, prices may drop.

Critics are pushing Perdue to release more information -- including precise data about its remaining antibiotic use and details on how it's being monitored -- but are generally celebrating the announcement. It's particularly notable in that it goes way beyond the little the FDA has managed to do to address the routine use of antibiotics on animals, a problem believed to be contributing to the development of antibiotic-resistant "superbugs." The World Health Organization calls antibiotic resistance a global threat; CDC director Thomas Frieden warns that we could be facing the "next pandemic." And while the FDA's had it on record since 1977 that feeding antibiotics intended for human use to animals can lead to antibiotic resistance, it didn't take any action until late last year, when it issued voluntary guidelines to curb the use of those antibiotics specifically intended to promote growth. Critics called it "an early holiday gift to the industry" and pointed out that the same antibiotics could still be prescribed for disease prevention -- more or less ensuring their continued presence in poultry.

In July, a federal appeals court ruled that the FDA isn't required to ban the use of potentially dangerous antibiotics in animals, a decision that Robert Lawrence, director of the Johns Hopkins Center for a Livable Future and a professor with the Johns Hopkins Bloomberg School of Public Health, called "deeply disappointing," because it “allows voluntary guidelines to take the place of decisive action in confronting one of the most important public health problems of our time.”

In lieu of decisive federal action, there's reason to hope that Perdue's announcement nudges the rest of the industry forward.