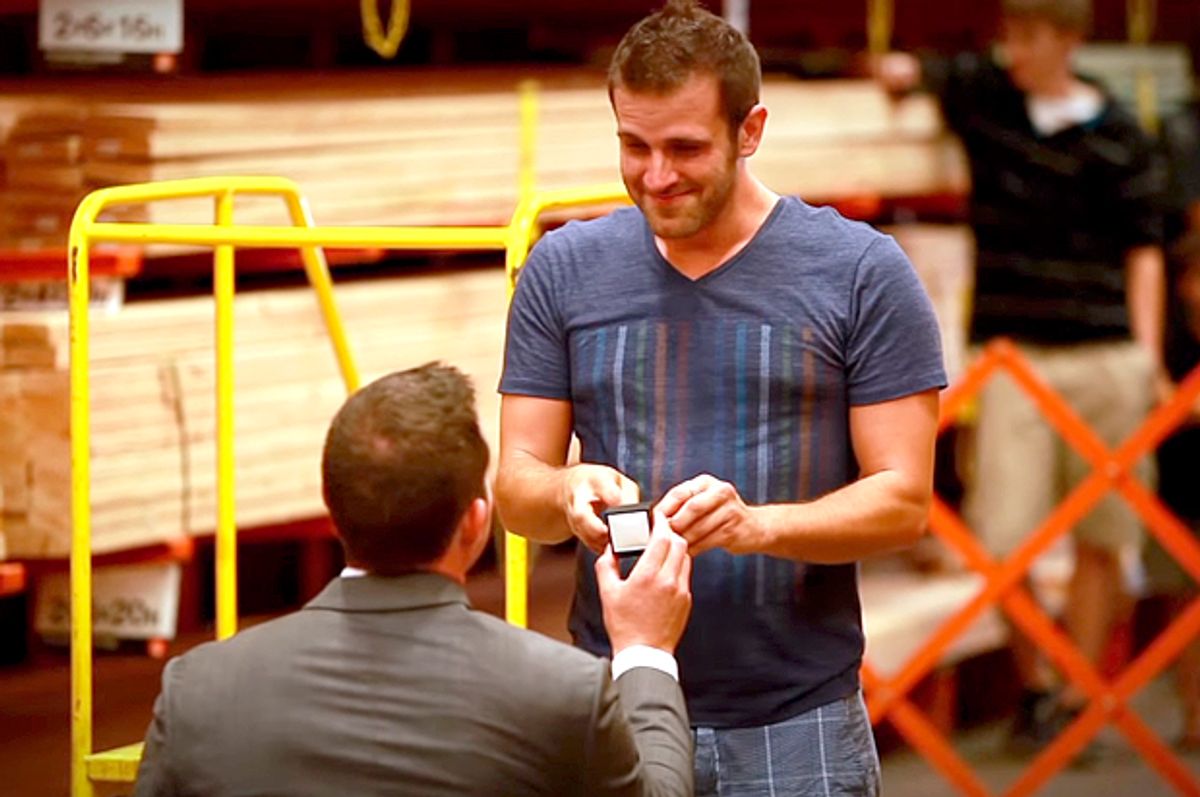 Of course your romance is special. Of course your relationship is like something out of a fairy tale or a Hollywood movie. And I am truly happy that you have found the person you want to spend the rest of your life with. But if you interrupt me in the middle of a Channing Tatum flick, I swear to God I will rain hellfire upon you and everything you love.

In a report this week out of Pittsburgh with the saddest opening lines ever written, "Tom Moore knew his proposal to his girlfriend Amanda Rogers had to be impressive. Epic, even." To that end, Moore, who apparently felt the unstoppable imperative to pop the question in a manner nothing short of "epic," spent "a month of planning and coordinating" a proposal right in midst of a nearby theater's showing of "22 Jump Street."  As local news reporter Susan Koeppen – who worked with the young man on making his dream come true – reported last week, "All of a sudden, the movie stops and sweet romantic music fills the theater. Pictures of Amanda and Tom fill the screen. Cue the tears. Amanda is shocked. Bring up the lights, and Tom gets down on one knee. The perfect proposal. She says yes. Applause from the moviegoers … a mix of family, friends and strangers."

You know what? I'll give you that it took a degree of effort. I'll even allow that for a certain kind of person, this would even be considered sweet. But I will be damned if I'm going sit back and accept that interrupting a Jonah Hill vehicle is the recipe for a "perfect" marriage proposal. Or as Rebecca Rose wrote Wednesday on Jezebel, "Who am I to fall on the floor, rolling around in hysterics at the idea that one of your most sacred and beautiful memories is sandwiched between scenes of Channing Tatum smarmily phoning it in?"

The epic, amazing wedding proposal is, by now, as reliable a viral device as kittens doing adorably atypical things or yokels saying unguarded things on their local news -- and about 10 times more irritating. Three years ago, Atlanta romantic Matt Still deployed the movie theater proposal tactic on his girlfriend Ginny Joiner in what the couple modestly referred to as the "Greatest Marriage Proposal EVER!!!" They subsequently appeared on every talk show in existence and racked up over 30 million YouTube views. Now married with a daughter, the couple currently claim they’ve been so inspiring they have, chillingly, "decided to start our very own proposal business!" Last year, there was the Spencer's Home Depot proposal, wherein a Utah man named Dustin found "a mob of friends and family" dancing their way through the home improvement aisle as his boyfriend asked him to get hitched. Twelve million views and counting. What's your viral proposal pleasure? The CrossFit proposal? The public transportation proposal? The Times Square Jumbotron proposal? The vaguely traumatic fake arrest proposal? Just remember, if you haven't brought in a full marching band, you probably don't really love each other. I don't want to discourage anybody with more modest plans, but if you can't get more than a thousand people in on the event, you are totally weak sauce and deserve to die alone.

It takes all kinds in this life and plenty of people love a public gesture. I admit that I, in contrast, live in the constant terror of a flash mob breaking out, or at the least being accosted by Billy Eichner. If you want to go big, mazel tov. But maybe you could also remember that love is not measured in millions of views or in news coverage or in how many hundreds of people you can recruit for your spectacle/serious question regarding how you want to spend the rest of your life. Love is not a social media popularity competition, nor, for that matter, is it a group activity. You can bring in a team of circus performers and the entire population of your town, but a marriage is still going to consist of exactly two people. And maybe it's even two people who just wanted a night out, undisturbed, to watch "22 Jump Street" in peace.