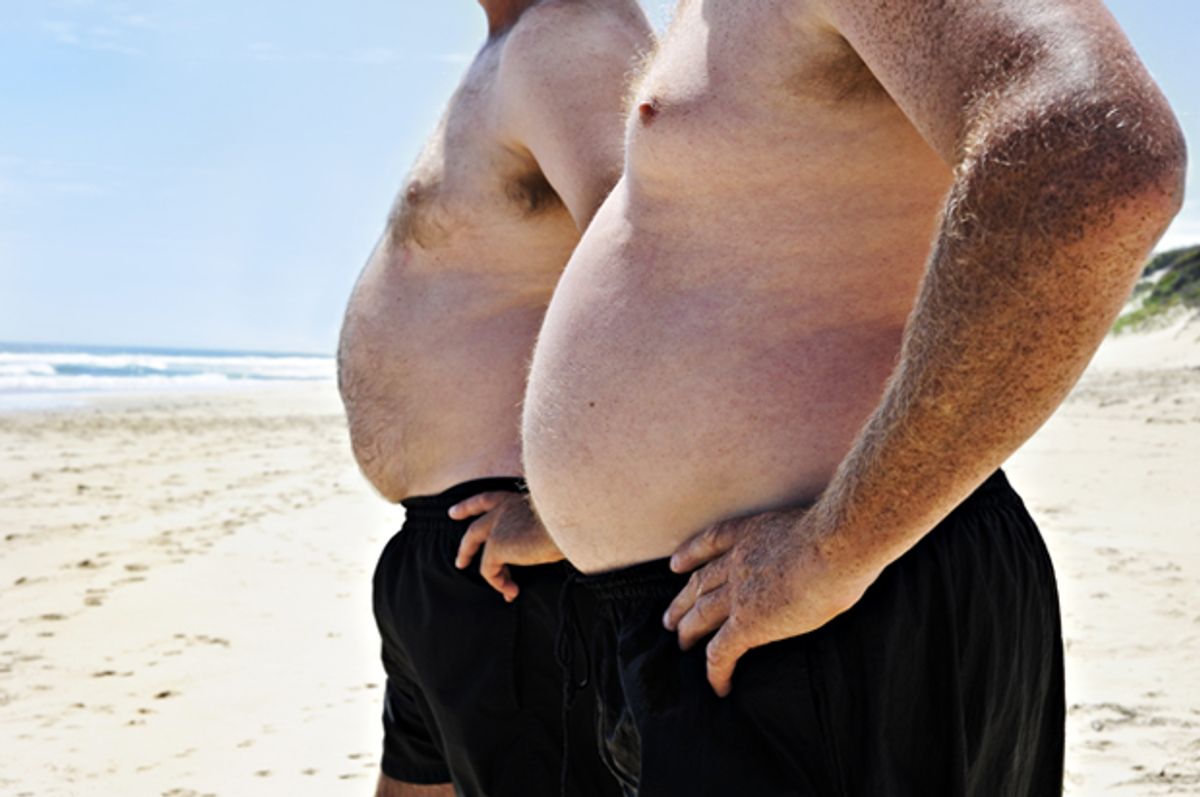 Esquire sure loves the classics. A well-tailored suit. A 42-year-old woman who maintains an acceptable level of bangability. And fat jokes!

In the most awkward piece of self-satire in, oh, days, food writer, Esquire editor-at-large and self-described "portly" gentleman Josh Ozersky offers a guide to style that asserts that "Sharp dressing isn't just for reed-slim male models." He then goes on to jovially recommend "frocks, tunics, togas, dashikis, sweatshirts, onesies, nightshirts, and halters," as well as advice on how to handle that "repulsive, quivering neck fat" and the "dank, sticky, and frequently containing unsightly spores and molds" in your "snug briefs." And when faced with the inevitable "perspiration stains, self-hatred, celibacy, isolation and the general loathing of mankind," he suggests universal fix-all of hash browns. Hilarious! If I were a big guy, I'd say that my pants! Are splitting! With laughter!

Ozersky's ode to neck fat and self-hatred is quite a refreshing change of pace from the whole empowerment and body diversity thing more commonly seen in recent years, especially among the ladies. Just a few days ago, in time for New York's Fashion Week, ModCloth held an open call for women of all shapes and sizes to display their #FashionTruth. Perhaps Ozersky was parodying that? Making some hilarious statement by flipping the gender, like those wacky jokes about if men had periods? Or perhaps it's just a device to make Esquire's target readership of "affluent, educated, and successful adults" have that sweet "Thank God I'm not that guy" feeling of satisfaction when they read it before hitting the gym. Or maybe it's a profound indictment of the way that the media fat-shames male celebrities with a gusto approaching that of its zeal for female ones – with headlines about "Man Boobs" and "Leolardo DiFlabrio."

I'll say this, though: Whatever the intent, Esquire's given us quite the refreshing change of pace from years of men making jokes about their weight as if they're not actually ashamed of their bodies – and I'm not just talking about fully self-actualized big guy Homer Simpson. Gabriel Iglesias proudly has built an entire career out of being "the fluffy guy" and boasts of being at only "the fourth level" of fat. A year ago, Patton Oswalt laughed as he told a Conan audience, "Look at this, for God's sake," while pointing to his own physique, and joked of his dieting routine that "I'm hoping my body fat will respect my perseverance." Louis C.K., whose beloved series opens with him hastily choking down a slice of pizza, once did a whole routine in which he bragged, "I don't care how I look. I'm bald; I'm fat; I don't give a f—k." And professional yo-yo dieter Chris Pratt, who is a full-on hottie whatever his belt size, did an entire slideshow of weight gain tips a few years ago for Vulture that included advice like "If you see something, eat something."

So kudos, I guess, to Esquire for taking a bold stand and going for straight up, old school "I am fat and fat people are gross!" humor. It's just a little strange that the joke seems so sad and weird. If you're going to be the stereotype, aren't you supposed to be jolly? But I'll say this, Esquire. You ran, in 2014, a piece that included a gag about "plump arms unable to raise a fork higher than chest-level," and that takes a whole lot of guts.