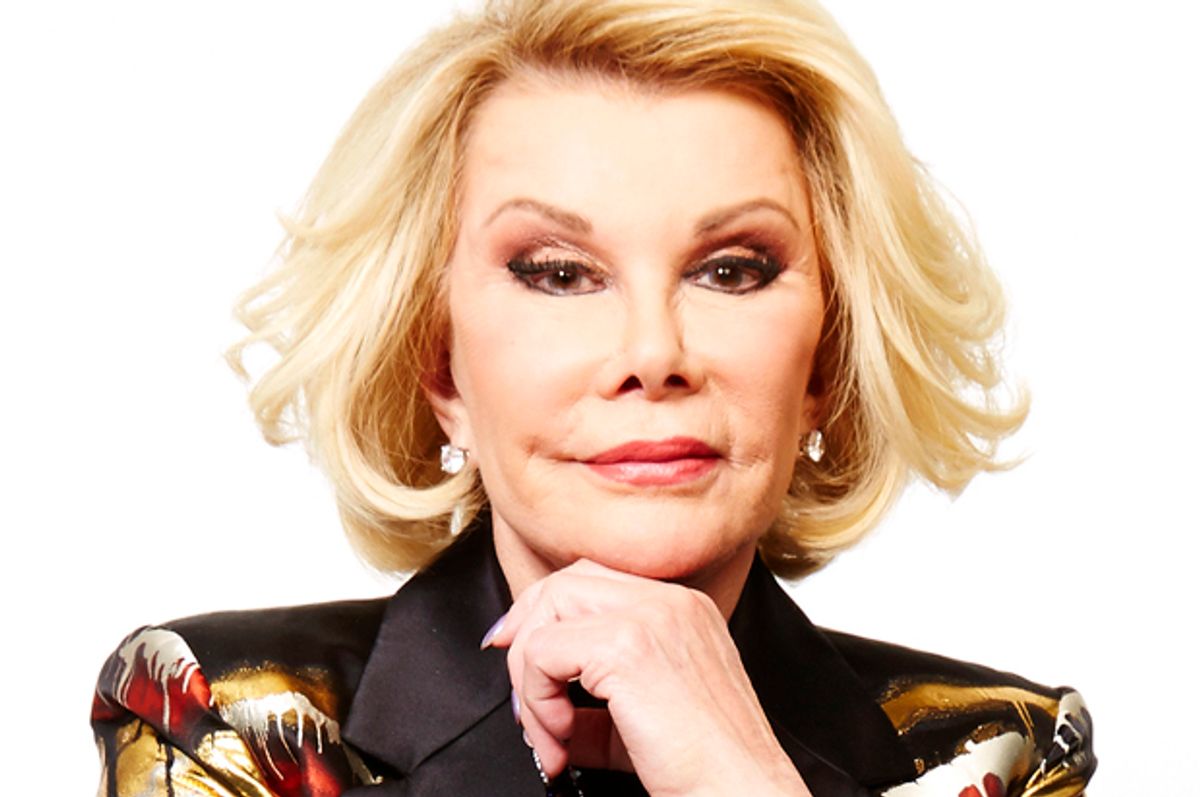 When Joan Rivers died Thursday at the age of 81 – because 81-year-old people sometimes die – it didn't take long for some of the geniuses of social media to connect the dots and ascertain the real cause of death. She did, after all, declare last month her feelings on Palestine were that "The dead deserve to be dead," and "Who cares?" about civilian fatalities. And this, according to the swiftly trending hashtag #karma, had something to do with her demise. "2 weeks ago Joan Rivers stated Palestinians deserve to die and they were asking for it," noted one typical tweeter Thursday evening. "Now she's dead. #karma." Another added, "Karma at work there. Without a doubt."

It was a sentiment that had already been expressed elsewhere earlier in the week, when Bernard Madoff's son Andrew died of mantle cell lymphoma at the age of 48. (Madoff's other son, Mark, committed suicide four years ago.) "Bernie Madoff's last remaining son passed away today," tweeted one armchair analyst of spiritual payback. "If you have any doubts about Karma catching you for bad deeds, here's the sad proof." Another observed, "There's a mysterious karma that still surrounds Bernie Madoff." And of course, the commenters on the news stories around the death have offered a similar opinion, asking, "How's karma working out for ya Bernie?" Three years ago, when Christopher Hitchens died of cancer, detractors of the noted atheist similarly found in his passing something more than mere cancer. It was "an excruciating reminder of the consequences of unbelief." That's funny, because believers die every second. What's that an excruciating reminder of?

So just to clear things up for anybody who doesn't understand how corporeal existence works: Everybody dies. People who were very nice, people who were nasty, everybody. That's a fact. Karma, on the other hand, is a belief. Karma means your behavior, both positive and negative, affects your destiny in this life and beyond. It doesn't mean the universe is hiding in wait to punish you, and it sure as hell doesn't mean it's going to punish your children. In a very lovely and simple piece in Psychology Today two years ago, Toni Bernhard explained the karma of intention and action, "It means that we have the ability to change ourselves no matter how ingrained our habits are." Positive behavior begets more, for example. And she added that people get sick because "Bodies get sick and injured and old. That’s the essence of the Buddha’s first noble truth." Likewise, although there is certainly biblical precedent for ascribing unpleasant things happening to people because of God's wrath -- and if you want to be one of the crazy people who believe in a God who selectively punishes human beings, you're free to do so -- I'm going to go ahead and say that then God must really hate all of us and we must all be terrible because all of us die.

Unless you're being executed, death is not a punishment. Death is what happens because you were born. It's certainly not a byproduct of mouthing off about Palestine, or of having a father in prison, or of being an atheist. I say this because I know that you can actually be a person who believes in karma, who believes in God, and still not be a total dope about the way the philosophies attached to them work. And if you do believe in a spiritual path, you ought to believe in the principles of kindness and compassion, which would include not gloating when people die.