My daughter's Ebola scare: Why we're not ready to panic (yet)

Ebola reached Senegal just as my 19-year-old arrived to study abroad. But we're not bringing her home. Here's why 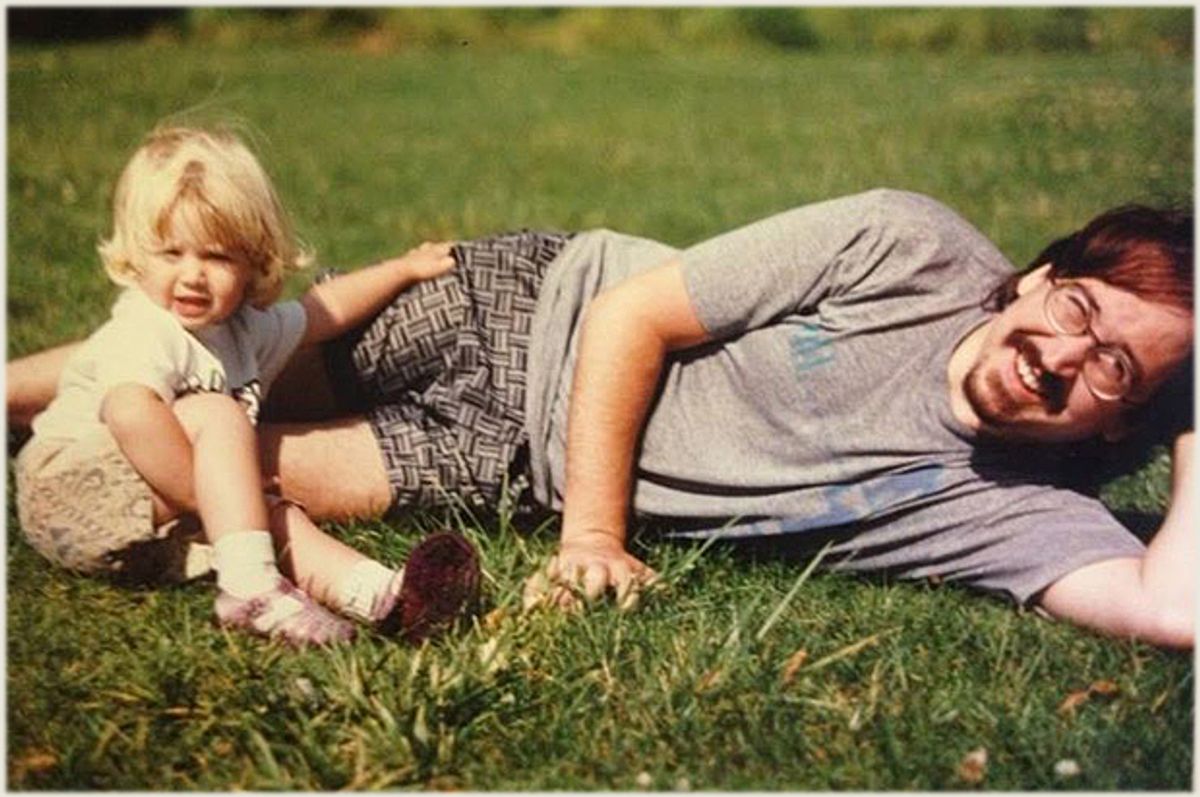 The author with his daughter as a young girl
--

Last Friday was an odd, emotional day. Upon waking up I was delighted to see an email from my daughter, describing her first days in Dakar, the capital city of Senegal. In swift, evocative strokes she communicated her excitement about the Senegalese family she was staying with, the fashion sense of Dakar's women, and how she had learned to eat according to local custom with no utensils and only her right hand -- never the left!

But less than a minute after reading the email, I noticed a headline via Twitter. Senegal had just announced the discovery of its first -- and so far only -- case of Ebola. Panic struck. My 19-year-old daughter is in Senegal for four months of study via a respected university abroad program. An avid world traveler, fluent in French and deeply interested in African history, she had been planning and looking forward to this adventure for more than a year. But ... Ebola? My heart started racing. I felt panicky. Her mother and I conferred on the obvious question: Should we pull her out immediately? We made phone calls and sent anxious emails.

We had not sent our daughter off to Senegal unmindful of the tragedy playing out in West Africa, the epidemic that has already killed at least 1,900 people, mostly in the desperately poor nations of Guinea, Sierra Leone and Liberia. From the moment that news of the Ebola outbreak started penetrating global consciousness, I've been tracking its spread, and wondering whether my daughter's plans were prudent. I've talked to doctors who specialize in infectious diseases, and learned as much as I could, not just about Ebola, but about West Africa in general.

Everywhere, I heard a consistent message. Senegal is a completely different story than its southern neighbors. For complex reasons of history and culture, Senegal is a stable democracy with a much more advanced healthcare infrastructure than the countries worst hit by the virus. The severity of the outbreak in the three most affected countries has everything to do with the absence of doctors and hospitals and resources and basic medical literacy in those countries. Senegal was different. My initial worries were assuaged.

But last Friday it got real. From 6,000 miles away, abstract reflections on the strength of Senegalese institutions crumbled instantly before the assault of apocalyptic headlines. The patient diagnosed with Ebola, I learned, had been living in a crowded suburb of Dakar for three weeks, undetected. A student from Guinea, he had fled his country after members of his family became infected. (I learned later that his mother, sister and brother had all died.)

Initial news reports treated the Senegalese development as a major expansion of the epidemic. A week later, the headlines are no better. Here's a sampling of what I woke up to this morning:

Reading these news stories, one starts to think, "Only a really crazy, horribly bad parent would think twice about the sanity of leaving one's child in West Africa. Get her out ... yesterday!"

My daughter's mother and I have been in direct contact with administrators of the university program. It should come as no surprise that they are monitoring the situation with extreme care. We have learned that they have contracted the "on-call services of two travel emergency extraction and evacuation companies," and that they are carefully heeding "guidance from CDC, WHO, the US Government in addition to guidance from travel medical insurance groups." Our initial communications revealed a level of detailed, granular knowledge about the situation in Dakar on their part that was more complete that what could be gleaned from news reports. After talking with the administrators and reviewing their reports, we feel comfortable taking at face value their bottom line: "We are advised that the risk for students remains low in Senegal."

For now. We certainly reserve the right to change our minds on short notice should the situation change. And we would obviously support our daughter if she decided that she needed to leave, for any reason.

But here's the crucial thing. The study-abroad program is not panicking. Nor is the Senegalese government panicking, or the family that my daughter is living with. Which is not to say Ebola isn't a hot topic of discussion in Dakar. My daughter reports that "everyone is talking about it" and popular sentiment is not disposed very kindly to the Guinean student who fled his own country and put Senegalese at risk of infection. She also reports that medical authorities have contacted and isolated everyone they believe the Guinean student has interacted with in the last three weeks, and so far, no other cases of Ebola have been identified. She intends to continue with normal life,  which includes taking classes and hanging out at the beach with new friends. She's even volunteered to do some community service teaching kids English. Only one of her fellow students has decided to leave because she was feeling too much anxiety about Ebola. Everyone else is staying put. For the moment.

She also offered me a capsule course in Ebola literacy. You might not grasp this from the majority of media coverage, but Ebola is actually hard to catch. Unlike, say, tuberculosis, you can't "get" Ebola by merely breathing the same air as an infected person. You must have direct contact with the bodily fluids of an Ebola carrier. And if a person is not displaying symptoms they are not contagious. The people most at risk of catching Ebola are the people who are taking care of infected patients without the proper equipment and safety gear, and, most important, adequate knowledge about how Ebola spreads.

We should not underestimate how grave the situation is in Sierra Leone, Liberia and Guinea. I talked to one specialist in infectious diseases who believes that the World Health Organization's estimate -- that 20,000 people will die before the outbreak is contained -- is low "by an order of magnitude." The details revealed by CDC director Tom Frieden at a press conference Tuesday on his recent visit to the region are highly distressing.

But at least some of the highly charged rhetoric from the doctors and aid organizations closest to the situation about how "the window is closing" on our chances of containing the current outbreak are clearly intended to light a fire under the ass of the institutions capable of actually making a difference. Whether it is due to bureaucratic obstacles or budget cuts or sheer cowardice, it's clear that the international health community is not moving as quickly as it should to address what is fundamentally a solvable problem. Panic and fear is an inappropriate response to the outbreak. Money and bodies on the ground are what's needed.

Let's revisit that Mother Jones headline: "This Map Shows Why People Are Freaking Out About Senegal." The map in question shows the direct international air routes that connect Dakar to the rest of the world. Unlike Sierra Leone, Liberia and Guinea, Senegal is relatively integrated into the global economy. The worrisome prospect, then, is that Ebola in Senegal has a better chance of getting to New York, or London, or Paris.

But that's not actually what we should be worrying about. An Ebola patient who ends up in New York isn't a serious problem. Not only would the U.S. medical infrastructure mobilize quickly to quarantine and isolate the carrier and any contacts he or she might have made, but his or her chances of survival would be greatly enhanced by access to top-notch healthcare facilities. Every indication so far suggests that mortality rates in this outbreak plunge depending on just how good the medical treatment is.

Let's be clear about what I'm not saying here: I am not holding off on extracting my daughter from Senegal because I believe in any way that she's a symbol for how the West should be engaging with West Africa. She's not a healthcare professional, and either she or her parents could change their mind tomorrow about whether staying in Senegal makes sense, and that would be absolutely OK. But her calm, and the calm exhibited by her program, have encouraged me to look at the entirety of the crisis in a new way. And rather than be terrified by the rapid spread of a deadly hemorrhagic fever, I find that instead, I'm angry. I'm angry at budget cuts at the World Health Organization. I'm angry at headlines that sensationalize instead of mobilize. I'm furious the slave trade of the 17th and 18th centuries gutted the traditional cultures and institutions of West Africa more than any other part of the entire continent. It's no accident that there's a horrible viral epidemic in Guinea. It's a consequence of history -- a discipline, by the way, that happens to be my daughter's major.

But what's broken can be fixed. Here's a more useful tweet alert than the typical "out of control" headline. It comes courtesy of USAID.

And here are some useful words from World Bank president Jim Yong Kim, himself a veteran of the public health sector, from an editorial published on Aug. 31:

... Ebola has been stopped in every other outbreak to date, and it can be stopped in West Africa, too. The crisis we are watching unfold derives less from the virus itself and more from deadly and misinformed biases that have led to a disastrously inadequate response to the outbreak... But the reality is this: The Ebola crisis today is a reflection of long-standing and growing inequalities of access to basic health care... To halt this epidemic, we need an emergency response that is equal to the challenge.... With a strong public health response led by the United Nations, the World Health Organization, the United States, Britain, France and other wealthy nations, the virus could be contained and the fatality rate — which, based on the most conservative estimates, exceeds 50 percent in the present outbreak — would drop dramatically, perhaps to below 20 percent.