I've been obsessively devouring episodes of "The Bold and the Beautiful" since college, and I don't plan to stop 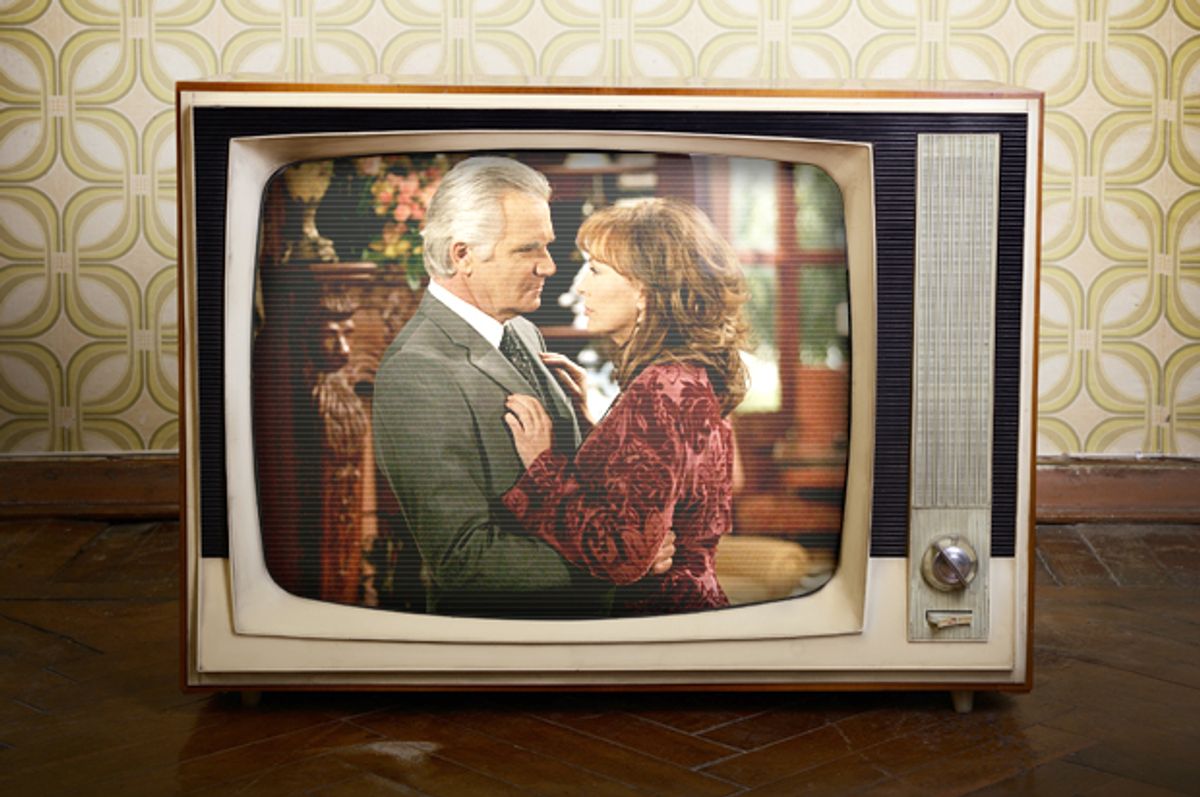 Years ago, while in college, I flicked on my television one morning and saw two blondes in confrontation. I was only passively watching while making coffee, but in just a few minutes of campy dialog that was bogged down with backstory and interrupted by long, dramatic gazes, I learned the women had once been best friends, but had been driven apart by their love for the same man—Ridge, the handsome son of a famous L.A. clothing designer.

"The Bold and the Beautiful." It’s a terrible show. And the longest-running obsession of my life.

The first blonde, Caroline, was actually married to Ridge’s brother, but had previously been engaged to Ridge. The second blonde, Brooke, was pregnant with Ridge’s child. Caroline was the daughter of a media mogul and Brooke was just a simple girl from the Valley. She was clearly the underdog, and I was Team Brooke by the first commercial.

I started tuning in every morning. It was bad television, and I knew that. I told myself I would stop as soon as Ridge chose which blonde to love. But a few weeks later, after Brooke had miscarried and Ridge had proposed to Caroline, I was still watching every day. It became, in a word, an addiction.

Soap opera storylines don’t conclude; they blur into new ones. I could never decide when it was time to jump off the train. After Ridge was married, Brooke turned to his father, Eric, for support, and by the time Ridge and Caroline returned from their honeymoon, Brooke was pregnant with Eric’s child.

Then Caroline died of leukemia six months later and, with Brooke unavailable, Ridge fell into the arms of his dead wife’s oncologist, Dr. Taylor Hayes. Then Brooke realized she still loved Ridge, and we were back to the start.

The show has been on for more than 25 years, relying on one central plot: Brooke and Ridge are soul mates, but their love keeps crumbling under what can best be summed up as “circumstances.” And every time they are apart, Ridge goes running back to Taylor.

In the genre of soaps, I would have to say this is one of the least compelling storylines ever, and yet I have fallen in and out of its spell over the last 22 years. And like any addict, I always find a way to get my fix. Even during a decade or more that I did not own a television, I would find myself reading episode summaries online. Hooked.

Allison Eden, assistant professor of media psychology at the VU University, Amsterdam, has done a lot of research into the appeal and effects of soap operas. According to Eden, all academic study into the genre of soap operas has basically pointed to three motivations for why we tune in: the first being a mere need to pass the time. “They are always on at the same time every day,” Eden says. “You can turn a show on, tune in, fold your laundry or whatever, and get your fix, your bite of entertainment. It’s what we call ritualized viewing. It’s a pretty reliable source of low-level hedonic pleasure.”

That was certainly true in my case. Every morning at 8:25, this show was on while I got ready for my day. But even on days I could sleep in later, I was getting up to watch.

One thing was clear: I did not identify with the characters. For one, they are filthy rich, which, according to Eden, is typical of the cultural values reflected in American soap operas. “Class values are reflected in soaps in America where everyone is wealthy and in the UK where everyone is more working-class,” she says. “And with the Mexican telenovelas, they really emphasize family loyalty, so there is a lot less betrayal. More inner-family loyalty.”

Ridge was also briefly involved with Brooke’s daughter, Bridget, Ridge’s half sister, whom he once believed to be his own child. The storyline was cut short when viewers protested—showing that even in this genre, you can go too far.

Mothers and daughters aren’t so loyal, either. Taylor has shared Brooke’s son Rick with both her daughters, and Brooke had a baby, Hope, with Deacon, who was married to her daughter, Bridget (and later, when Hope was a teen, Brooke “accidentally” slept with her boyfriend, too). Bridget and Brooke were both married to Ridge’s half brother, as was Brooke’s sister. You would think there were only two families in all of L.A.

And yet for all the outrageous decisions these people make, I can still find virtue in some characters and villainy in others, even when they engage in the same behaviors. Eden calls this the polarization effect. “If you start out thinking someone is a villain, then you interpret everything they do in a very negative light,” she says. “Even with more information over time, we don’t see people switching from ‘good’ to ‘bad’ -- we see people becoming much more entrenched in their viewpoints.”

This social connection is another reason researchers cite for why people watch soaps. “We see people looking to the genre a lot when they are lonely,” Eden says. “They have a sort of parasocial relationship with this ready-made group of characters that they can relate to and form judgments about. So it’s not like you’re friends, but you feel a social connection.”

Eden says people also watch soaps just to have something to talk about in their actual life, which I have experienced that with another soap. Anyone who was of television-viewing age in 1981 knew about "General Hospital"’s Luke and Laura storyline. Their wedding episode drew an audience of 30 million viewers and included a Liz Taylor cameo. The show also featured other nail-biting plots, including Russian spies and Aztec princesses searching for lost treasure. At the time everyone — everyone — was talking about this show.

But "The Bold and the Beautiful" just doesn’t have that kind of suspense or buzz. Unlike other shows where dialogue drives action, where there’s an urgency to advance the plot with each episode, the pace of a soap is slower. Sometimes an episode of "B&B" will be nothing more than a long, stretched out conversation between two characters in which nothing is actually resolved.

Not that it never goes down the path of melodrama — there was that time Taylor was kidnapped and made a Moroccan princess — but mostly the plot has been repetitive and predictable. Each time Ridge marries Brooke, again, you know it won’t last — and you know that their inevitable breakup won’t last, either.

Taylor and Brooke’s children have gone from gurgling infants to scheming adults with frightening speed. Today, their daughters continue the tradition of fighting for, marrying, and divorcing the same man. And kids grow up really fast: Bridget was born in 1992, was 13 by 1997, and turned 18 in 2000. Rick was born in 1989. Ten years later, he was 16 and ostensibly the father of his babysitter Amber’s unborn child despite her good friend believing she was setting Rick up (fun fact: this friend was played by none other than Usher Raymond IV, who, before he was all Yeah!, was on this show). It’s a circular, predictable, preposterous story, which is a big part of a soap’s lure: knowing that when bad things happen to characters you root for, it is just a matter of time before they triumph again.

So I'll never stop watching "The Bold and the Beautiful." I'll keep Googling its love triangles late into the night and obsessively rising every morning to devour its latest plot twist. As Eden said, the daily soap opera fix, as with any addiction, "can be a hard habit to break."

Tracy Brown Hamilton is a freelance journalist based in Amsterdam. You can follow her on Twitter @tracybhamilton.