Everything about the new "Meet the Press" points to an even more disgusting celebration of D.C. insider culture 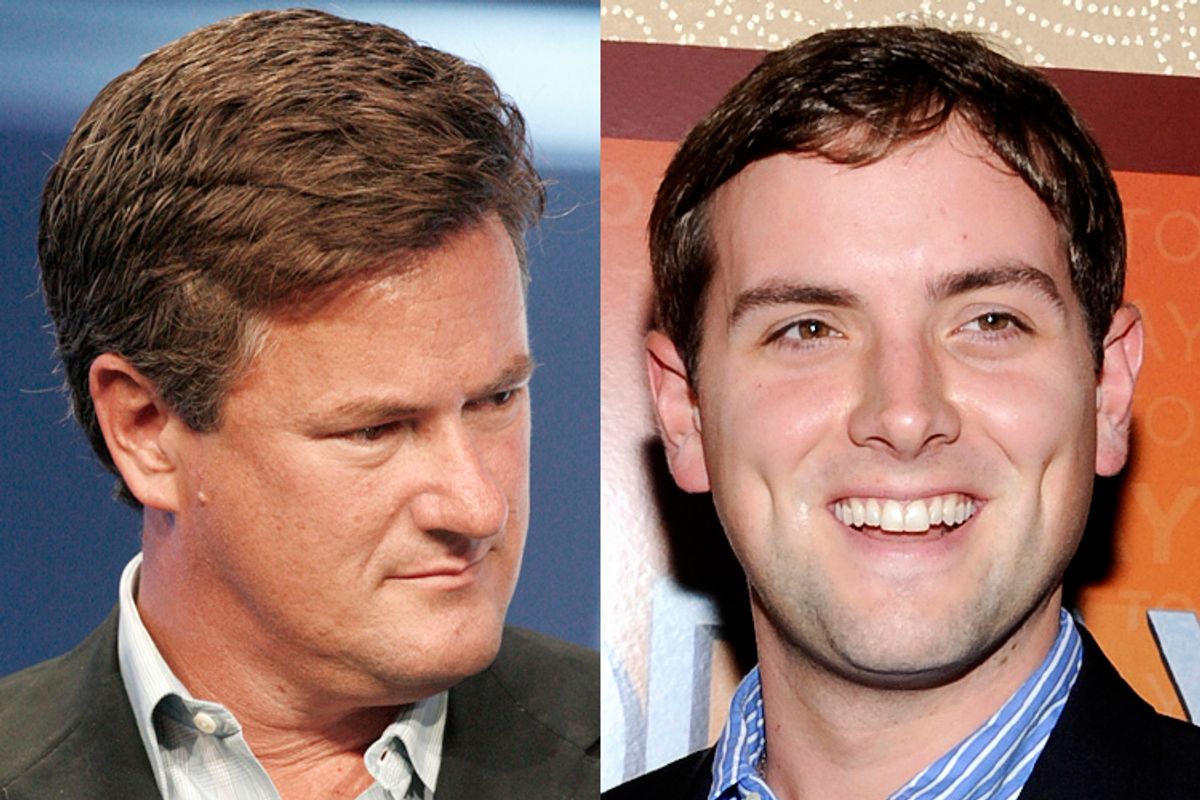 When NBC finally removed David Gregory as moderator of “Meet the Press” and installed Chuck Todd in his place, the network conducted a self-examination to try to figure out why its once-proud Sunday morning news program had become a barely watched joke. The diagnosis? A lack of “insider cred.”

As I wrote at the time, respect from “insiders” isn’t something that “Meet the Press” has ever lacked – the show is perhaps the purest expression of insider D.C. culture. But NBC is clearly serious about trying to turn the program into an even more festive celebration of self-important Beltway insiderism. The network just announced that Joe Scarborough will be its “senior political analyst” and a regular contributor.

According to Fishbowl NY:

“Joe has one of the best political minds in the NBC family,” said recently appointed 'Meet The Press' moderator Chuck Todd, in a statement. “His love of politics and passion for debate will guarantee the kind of robust conversation that has always been a hallmark of Meet the Press, and I look forward to the reported analysis he’ll bring to the table.”

I don’t doubt that Joe Scarborough loves politics and arguing with people, but he often gets things very, very wrong and picks fights with people much smarter than he is. Scarborough is the kind of analyst who relies heavily on “gut” feelings, like when he predicted “a narrow Obama win or a Romney landslide” just before the 2012 election based entirely on what “my gut tells me.” He then got into a fight with Nate Silver, who said all the data contradicted everything Scarborough’s gut told him. Silver was right, and after Obama was reelected comfortably Scarborough offered a “(semi) apology.”

Scarborough’s gift for “reported analysis” also sometimes takes the form of making wild accusations of conspiracy theories backed by zero evidence whatsoever. That particular strain of analysis involves lashing out at critics who rightly point out that he’s full of shit.

Also, anyone who wants to spend their morning watching Joe Scarborough drool out some centrist-conservative conventional wisdom can just watch “Morning Joe.” He doesn’t need another platform. But nothing says “insider cred” like a person whose animating purpose in life is to sit in front of a television camera and boast about his close connections to the famous and the powerful. Making Scarborough a regular on “Meet the Press” doesn’t make the show better or unique, but he’s a Very Serious Person who knows other Very Serious People.

Everything that’s been published about the incipient Chuck Todd Era of “Meet the Press” indicates that the goal is to amplify the insufferable, backslappy culture that already pervades the Sunday shows. And news outlets that revel in that nonsense can barely contain their excitement. Politico published a profile of Todd this morning that vibrates with anticipation that a “political junkie” (a term used twice in the first seven paragraphs) is taking the helm of “Meet” (which is apparently what the cool kids call the show). And, of course, as is the wont of the pundit class, the big focus is on the future of the “roundtable”:

Todd’s roundtable will feature regular contributors, including Joe Scarborough, who has been promoted to NBC News senior political analyst and a regular contributor to “Meet.” (Todd dismisses any suggestion that Scarborough doesn’t fit the bill for reported analysis: “Scarborough is more plugged-in than people realize,” he said. “This is a guy who is on the phone a lot. If I thought Joe was just pontificating, I wouldn’t have him on.”) Luke Russert, the congressional reporter and son of the late moderator, will also feature regularly on the program, both on the roundtable and as a reporter on the digital side.

Wow, Joe Scarborough and the son of the guy who used to host the program. Two fresh faces who climbed to the top based on sheer grit and determination. Should make for excellent television.

Buried near the end of the Politico profile is this fun little nugget:

There is, of course, much work to be done. Todd said he’d spent so much time doing promos and media interviews that he didn’t feel like he’d had enough time to actually put the show together.

Oh really? Well, at least the important stuff got done.