The 10 most inhumane laws courtesy of Southern Republicans 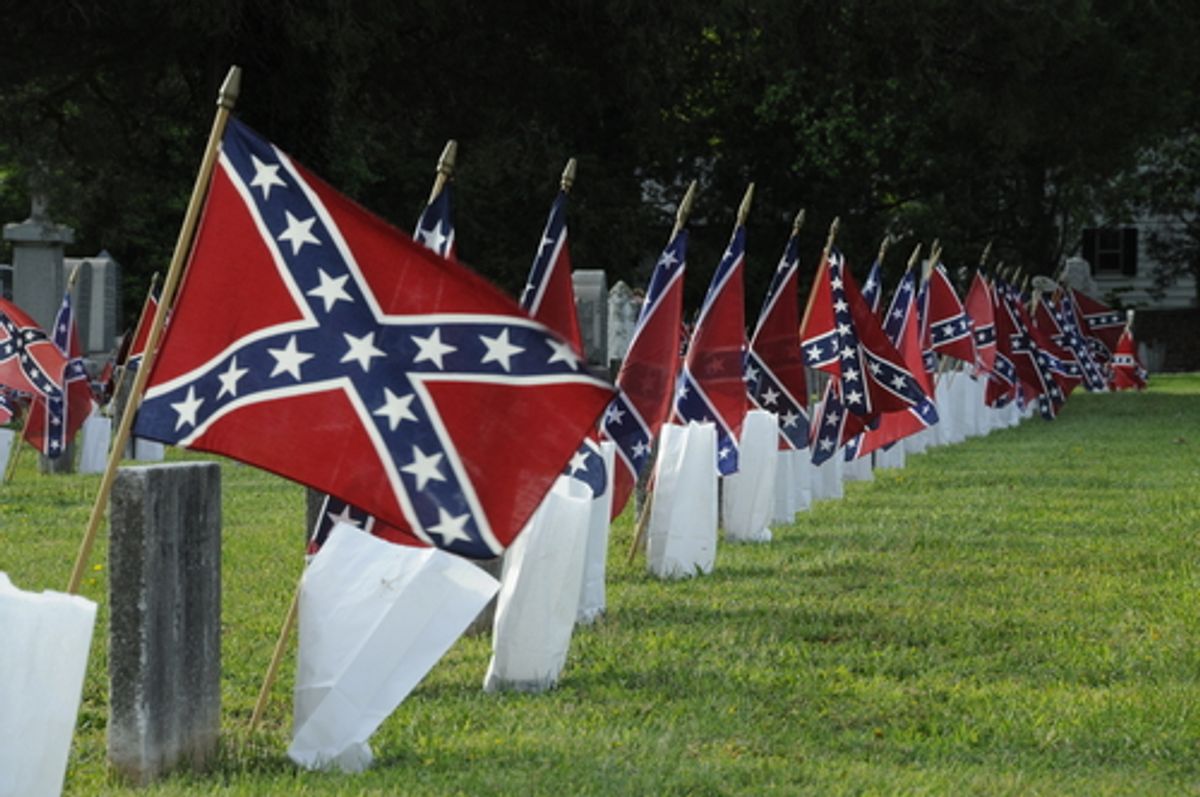 The extreme right has been in a state of maximum anxiety during the Barack Obama era. Between growing acceptance for same-sex marriage, the implementation of the Affordable Care Act of 2010, troubling economic conditions (which they blame on the left even though the September 2008 crash occurred under George W. Bush’s failed presidency) and being constantly whipped into a frenzy by Fox News and AM talk radio, far-right Republicans and the Tea Party believe they are “losing their country.”

Instead of moving more to the center, the Republican Party and the Tea Party have resolved to “rally the base” by doubling down on their insanity, especially in the Deep South and Texas, where it is much easier to push a far-right agenda than it is in more centrist or liberal-leaning parts of the United States. And in a mid-term election year like 2014, railing against their usual targets—African Americans, gays, immigrants, atheists, women seeking abortions and pretty much anyone else who isn’t a white male Christian fundamentalist over 50—is an all-too-familiar GOP get-out-the-vote strategy for the Bible Belt.

Here are 10 examples of Republicans showing their “southern hospitality” in 2013 and 2014 with oppressive laws, bills and official platforms in the Deep South and Texas.

When it comes to reproductive freedom, the Deep South abuses women on multiple fronts. First, Republicans and the Christian Right have plagued southern schools with failed abstinence-only sex education programs, which lead to unwanted pregnancies. Then they attack healthcare reform, thus making access to contraception more difficult. And when unwanted pregnancies occur, their solution is to restrict abortion. Mississippi Republican Gov. Phil Bryant has been quite open about his desire to make Mississippi an abortion-free state. The entire state of Mississippi has only one abortion clinic left (in Jackson), and in 2012, Bryant happily signed into law Mississippi House Bill 1390, which requires any doctor who performs abortions in that state to obtain admitting privileges in a local hospital. The goal is clear: Bryant and his Christian fundamentalist allies want to see that Jackson clinic shut down. In July, a federal appeals court ruled that Bill 1390 was unconstitutionaland a violation of Roe v. Wade.

In April, Republican Tennessee Gov. Bill Haslam signed into law a bill that allows women in that state to be prosecuted for assault if they use some type of narcotic while pregnant. But Tennessee Law SB 1391—or as the law’s critics call it, the Tennessee Pregnancy Criminalization Law—could actually have the effect of harming fetuses because it discourages pregnant women with substance abuse problems from seeking treatment. Opponents of 1391have ranged from the Drug Policy Alliance to the American Civil Liberties Union. In July, Tennessee resident Mallory Loyola, 26, became the first woman arrested under the law: two days after giving birth to her daughter, who tested positive for methamphetamine, the 26-year-old Loyola was charged with assault.

Marriage licenses for same-sex couples are now being issued in around 20 states, including all the New England states and every Pacific state except Alaska. With courts striking down bans on gay marriage in many parts of the U.S., states prohibiting gay marriage will soon be a minority. Those facts are not lost on the Christian Right, which reasons that if they cannot stop gay rights from advancing in New England or the Pacific Northwest, they can fight them in the Bible Belt. In Tennessee, State Sen. Mike Bell (a Republican) sponsored Bill 2566, which would have allowed businesses to refuse to serve gay couples on religious grounds. Under 2566 (which gay activists called the Turn Away the Gays Bill), businesses that refused to serve same-sex couples would have been protected from lawsuits. The bill was withdrawn, but the fact that Bell introduced it in the first place shows how quick southern Republicans can be to pander to the Christian fundamentalist fringe.

In 2013, Alabama Republican Gov. Robert J. Bentley signed into law a bill similar to Mississippi’s Law 1390: the Alabama law states that any doctor performing abortions in that state must have admitting privileges in a local hospital. Alabama has more abortion clinics than Mississippi (five altogether), but when the ACLU filed a suit against the law, it asserted it would have the effect of forcing clinics in Mobile, Birmingham and Montgomery to close and leave only the clinics in Tuscaloosa and Huntsville open. In May, the Louisiana State Legislature passed an admitting-privileges bill of its own (which Republican Gov. Bobby Jindal signed into law into June). Planned Parenthood fears the law could result in three of Louisiana’s abortion clinics having to close.

Throughout the 1980s and 1990s, North Carolina was reliably Republican in presidential elections. But in 2008, Barack Obama accomplished the unthinkable: he narrowly won the state’s 15 electoral votes, and in 2012, Obama lost North Carolina to Republican candidate Mitt Romney by a mere 2%. The fact that North Carolina is now considered a battleground state in presidential elections worries the state’s Republicans, who crafted a voter ID bill that Republican Gov. Pat McCrory signed into law in 2013. The law does away with same-day voter registration, states that 16- and 17-year-olds can no longer pre-register for voting, reduces early voting from 17 to 10 days, and ends a state-sponsored voter registration drive. It is clearly designed to discourage people who are more likely to lean Democrat (younger voters, people of color, among others) from voting. The ACLU and the NAACP both filed lawsuits against the law last year, and this summer, the Justice Department sued North Carolina over the law.

In Alabama, Republicans have not only supported the state’s admitting privileges law, they have also supported a bill that would outlaw abortions in that state the minute a fetal heartbeat is detected. The bill, which was passed by the Alabama House of Representatives in March, makes no exception for rape or incest. Similar fetal heartbeat bills were introduced by Republicans in Mississippi and Kentucky in 2013, and that same year, Arkansas Gov. Mike Beebe (a Democrat) vetoed a fetal heartbeat bill that was passed by that state’s Republican-dominated legislature. The Arkansas bill, as envisioned by Republican State Sen. Jason Rapert, was especiallydraconian: Rapert wanted to make it a Class D felony, punishable by up to six years in prison, for doctors to perform an abortion after a heartbeat was detected. So much for the Republican belief in “small, limited government.”

The Christian Right is very good at using language like “anti-discrimination” and “pro-civil liberties” to push a far-right fundamentalist agenda. In April, Gov. Bill Haslam signed into law Tennessee’s Religious Viewpoints Anti-Discrimination Act, which says that students in public schools can express their views in a classroom setting and organize prayer groups on campus. But Hedy Weinberg, director of the American Civil Liberties Union of Tennessee, has opposed the law and argued that it “crosses the line from protecting religious freedom into creating systematic imposition of some students’ personal religious viewpoints on other students.” Gay activists fear that the law will make it easier for Christian fundamentalist groups to bully gay students in Tennessee’s public schools.

Many Texans deeply resent being called southerners: they consider themselves westerners, not part of the South. But when it comes to embracing the agenda of the Christian Right, Texas Republicans can be every bit as authoritarian as their counterparts in the Deep South. During its annual convention in June, the Texas Republican Party added some blatantly anti-gay languageto its official platform and endorsed so-called “reparative therapy” for gays. The Texas GOP now officially supports "reparative therapy and treatment for those patients seeking healing and wholeness from their homosexual lifestyle.”

The sale of sex toys is legal in most of the U.S.: any local politician who tried to outlaw the sale of vibrators in Seattle, Philadelphia or Los Angeles would be laughed out of office. But parts of the Bible Belt still have so-called “obscene device” laws, including Alabama (where the sale of sex toys was outlawed in 1998 and Christian fundamentalists continue to defend that law). Texas had a ban on the sale of sex toys, but it was rendered unenforceable when a 5th Circuit ruling declared the law unconstitutional in 2008. In Sandy Springs, Georgia, a city ordinance has stated, in effect, that one needs a doctor’s prescription to acquire a sex toy. In May, a local woman named Melissa Davenport filed a lawsuit against the city of Sandy Springs on the grounds that the law was unconstitutional.