Would you elect someone named "The Smiler"? The scariest comic book presidents

From vapid blowhards to supervillains, a few of the characters to ascend to the highest political office in comics 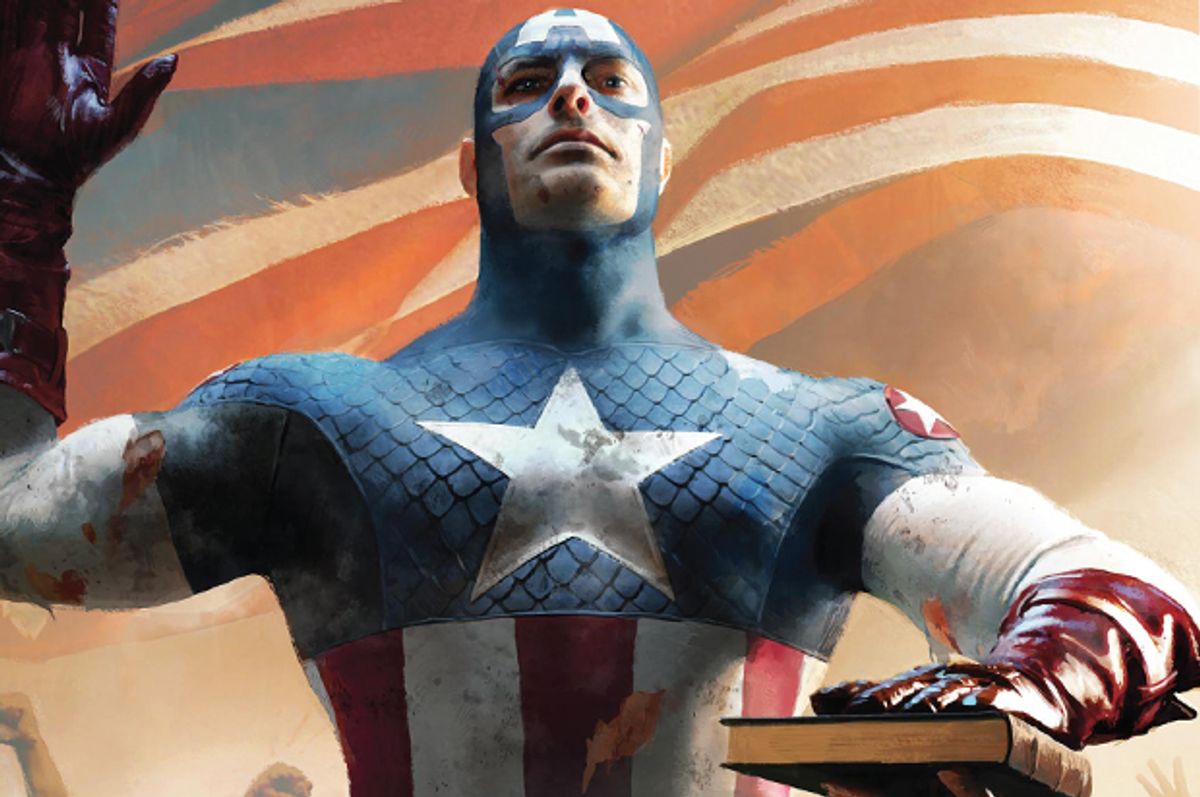 It’s hard not to be fascinated by the stoic cool of Barack Obama, the folksy suaveness of Bill Clinton, the twisted malice of Richard Nixon, and so on. With great power, great responsibility -- and with the world as their stage, presidents often seem like real-life superheroes — or supervillains, depending on your politics.

Over the years, real-life presidents have appeared in comics many times. Spider-Man met Barack Obama. George W. Bush schmoozed with the Ultimates. Superman became a stooge for Ronald Reagan. Howard the Duck ran for president himself against Jimmy Carter and Gerald Ford, while Captain America watched Richard Nixon blow his brains out. The twisted sci-fi alternate history “The Manhattan Projects” has featured versions of FDR, Harry Truman, JFK and Lyndon Johnson, who have been portrayed as a dangerous cyborg, an Illuminati-type weirdo, a coke-snorting dimwit and a murderous cowboy, respectively. Then there’s “The X-Presidents,” an adaption of the “Saturday Night Live” animation that took the presidents-as-superheroes idea literally, as Reagan, Carter, Ford and Bush Sr. gain superpowers and fight Mañuel Noriega, Idi Amin, Imelda Marcos and mole people disguised as babies.

Besides portraying real-life presidents, comic books have launched fictional characters to the highest office in the land. And why not? If you can turn a mild-mannered scientist into a giant green monster who talks like a toddler, why can’t you put a Lex Luthor in the White House? The following are some of the decent public servants, demonic beasts and holograms who have become president in comics. And yes, it’s very sad that even made-up presidents tend to be dudes.

DC is in the midst of publishing “Multiversity,” Grant Morrison’s long-awaited, bonkers series that features 52 different universes and a crisis that threatens to destroy them all. Each universe exists in comic books in another universe, and part of the plot involves characters reading comics for clues to end the multiversal danger. One of the main characters, who Morrison introduced a few years back in “Final Crisis,” is President Calvin Ellis, who is loosely based on Barack Obama and also happens to be the Superman of Earth-23. He’s the only president I know who drops lines like, “When in doubt, smash robot.”

Marvel’s Ultimate Universe has given Marvel a multiverse of its own, allowing them to reimagine and update character origins while taking death a bit more seriously. On Ultimate Earth, Captain America is way more of an ass than in the regular Marvel Universe. He actually spouts groan-worthy lines like “You think this letter on my head stands for France?” Though a bit of a dick, this Cap is still heroic as hell, which he proves by accepting a challenge more daunting than the hordes of Hydra: After America has been torn asunder by a Civil War type crisis, Cap gets elected president as a write-in candidate. I wish Cap existed in this world, because it would be amusing to see a debate where his opponents try to out-America Captain America.

Over the decades since his 1940 debut, Lex Luthor has taken on many roles, including mad scientist, cunning businessman, costumed supervillain — and president. What does it say about the presidency that putting the most famous supervillain ever in the White House was a plausible storyline? Ultimately, Luthor’s shenanigans were exposed and he was replaced by his VP Pete Ross, sending Luthor out of the Oval Office and back to the underground lair. In a future version of the Marvel Universe, another villain, Dr. Doom, became president. Just to be safe, maybe we should make a law protecting the presidency from anyone with an alliterative name.

“The Eighth Seal,” a political horror comic available digitally at Thrillbent, includes fictional president Derek Greene, but the focus is on First Lady Amelia Greene, who has a fainting episode in front of a kindergarten class. The press (in jackal mode as usual) suspect an eating disorder, but that would be a welcome problem compared to the terrifying images and sensations Greene is actually experiencing. When she looks in a mirror, she sees herself as a monster, and when she fainted in front of the kindergarteners, she imagined herself eating the little tykes. And it felt good. Written by James Tynion IV and illustrated by Jeremy Rock, this should appeal to fans of horror and politics: it’s a toss-up which is more terrifying.

This sci-fi series, written by Charles Soule and illustrated by Alberto Jiménez Alburquerque, is a sci-fi political thriller with one of the coolest premises in recent history. You don’t have to be a conspiracy buff to think the president has access to some secret info, right? Well, what if that secret info involved an alien race building a scary thingamajig right in our solar system? And there’s a military/scientific team on a one-way mission to investigate the gizmo? When Stephen Blades is elected, he replaces a very George W. Bush-like president (considered dumb, started unnecessary wars, bankrupted the country, etc.). The former president left a letter — Letter 44 — that fills the new president in on the space situation, which has apparently motivated his baffling policies. This series is addictive as hell, splitting between the political stuff and the team investigating the aliens. Despite the aliens, of all these fictional presidents, Blades feels the most real.

Would you trust someone nicknamed “The Smiler”? I hope not, because this president (in Warren Ellis and Darick Robertson’s “Transmetropolitan”) is one of the worst villains-in-chief in comics, presiding over an oppressive, fascist America while opposed by the amazingly named Spider Jerusalem, a Hunter S. Thompson homage. “The Smiler” sounds like a Batman villain, but he’s a far more real type of bastard: the kind of guy who grins incessantly while ordering assassinations and generally flushing the country down a dystopian toilet.

In Frank Miller and Bill Sienkiewicz’s immortal miniseries “Elektra Assassin,” Elektra Natchios manipulates a dopey, part-cyborg S.H.I.E.L.D. agent with ridiculous hair named Garrett to help her stop the beast incarnate from becoming president (more so than usual — we’re talking a real demonic beast). In this case, the beast is a politician named Ken Wind, whose creepy slogan is “Not wind like a watch, but wind — like the air.” Wind looks a bit like Dan Quayle with hints of JFK, but he is stuffed with evil mojo, the kind of power Elektra is familiar with from her time as an evil ninja with the evil ninja group the Hand. Ultimately, Wind does become president, but it’s still a happy ending you’ll have to check out for yourself. The story is dense and re-readable, but the highlight is the art. Holy crap, the art. Bill Sienkiewicz’s painted illustrations are like nothing in comics before or since.

In “The Dark Knight Strikes Again” (a far less well-regarded Frank Miller tale) Lex Luthor is again monkeying around with the presidency, not as himself, but through hilariously named Rick Rickard. Rickard appears to be a typically fake, empty blowhard, but that’s just the tip of the conspiracy-berg: the dude is a hologram controlled by Luthor and his good buddy Brainiac. This series is weird, trippy day-glo fun if you’re in the right mood, though it is pretty silly and implausible. I reckon America is at least three election cycles from being ready for its first hologram president.