Why are we so obsessed with superhero origin stories?: Here's a psychologist's take

Netflix is banking on "Gotham," the Batman prequel, because it's a story they know we're craving 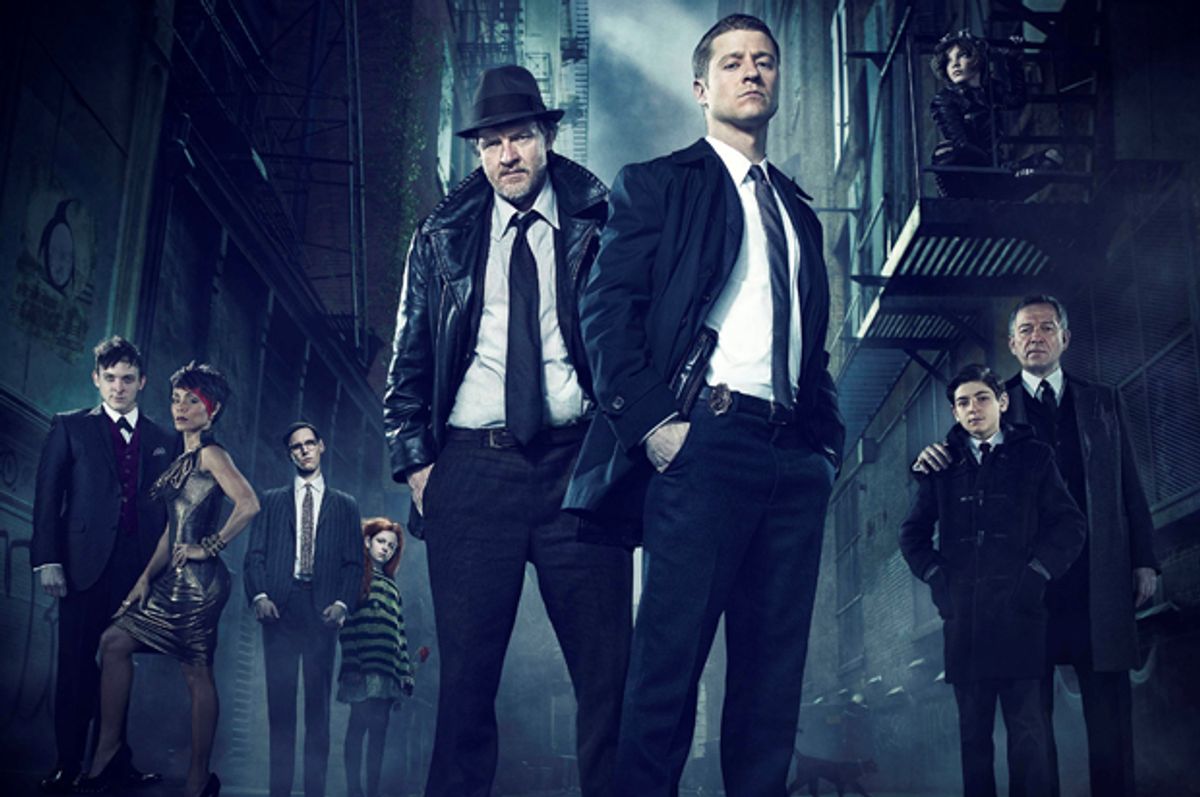 Though it hasn't even premiered yet, Fox's upcoming series "Gotham" has already made television history. Three days ago, Netflix bought the exclusive subscription video rights to the series, in a move that Deadline, which first reported the news, described as "unprecedented." What's even more interesting is that Netflix, potentially shelling out as much as $1.75 million per episode, made the move in an effort to expand its international audience.

That Netflix is using "Gotham," a prequel to the Batman stories, as part of its international growth strategy speaks to the power of the Batman story, and, in particular, the allure of origin stories, which somehow manage to reel us in again and again. The series follows a younger police commissioner James Gordon, upon the murder of young Bruce Wayne's parents, and shows the origins of the Batman villains like Two-Face, the Penguin, the Joker and Poison Ivy along with the evolution of the city. The pilot episode has gotten largely positive reviews.

For insight into why origin stories captivate us, Salon reached out to clinical psychologist Robin Rosenberg, who has written about "The Psychology of Superheroes." She explained that origin stories have the power to humanize -- but sometimes, that gets in the way of establishing a strong character.

Why are we so obsessed with origin stories?

With people, we’re interested in origin stories for several reasons. One is that we like people to be predictable. Not in a bad way, but we just like to pigeonhole people. We like to understand them, where they’re coming from, and why they do what they do --  which then makes them predictable. It also gives us context. So if we know someone is really sensitive about a particular topic, we’re more willing to work with that. If we understand why they get twitchy or why they get angry or why they break down crying. Whatever their response is, if we kind of understand it, we don’t think they’re weird. Origin stories help us make sense of another person.

How do we psychologically treat heroes differently from villains in origin stories?

It’s actually all point of view. So Magneto -- on the one hand we’d both agree he’s a villain. On the other hand, from his perspective -- he’s not like the Joker, who basically wreaks havoc for fun — he feels he is being a hero to his people. He is acting heroically, potentially sacrificing himself for the benefit of mutantkind. So in that context, whether he’s a hero or a villain is all point of view. In Batman’s world, there’s a character named Poison Ivy. She is what we could call an eco-terrorist. But from her point of view, she actually is being heroic because she has a mission and purpose that is greater than herself and for which she’s willing to put her life on the line.

Then you have villains that are very clear villains, like the Joker, who just derives pleasure from causing mayhem and destruction. So in that sense, yes, some heroes you could say are born, not made. Some people who are psychopaths appear to be born different... some research suggests that psychopaths have a biological underpinning that may, if not at birth, very early in life -- there’s no choice point.

And then you have other villains, like Two-Face. In that story arc, it is at some point the person, instead of post-traumatic growth -- again this is what the psychological literature says -- in post-traumatic growth, people’s worldview is challenged by trauma. Because the world is basically unpredictable and you can’t always protect yourself, which is a really scary thought. To really get that is a terrifying thought, and we have to live knowing that. Some people, like superheroes who have a trauma history, make meaning by saying, “I am going to do what I can either to prevent what happened to me from happening to other people or help people to whom this happened, the way I wish I had been helped.” They find a silver lining in a horrible event and feel like “OK, this happened for a reason,” and the reason is for me to then help people in some way related to this. But sometimes, the message people get is that life is capricious, life is short, bad things can happen any moment: “I’m going to get whatever I can regardless of who I hurt.” Then cynicism and greed can arrive. And this is also in real life, but that is the point at which the stories diverge between hero and villain.

Do we really love origin stories in and of themselves, or is it that we just love the characters and want to know everything that they’re up to, including their origin?

I think a well-done origin story is a good story, period. I happen to like “Pride and Prejudice,” so I often will use this example where, if Jane Austen had written subsequent novels with Elizabeth and Mr. Darcy, then the book we know of as “Pride and Prejudice” would’ve been the origin story. An origin story often has a crisis or pivot point where characters either have something traumatic or dramatic happen to them that transforms them. Some origin stories have multiple points of transformation -- the first "Harry Potter" book has multiple points of transformation.

That’s interesting because I think in pop culture we often see the origin story as the spin-off story -- as if these are things people don’t necessarily care about in and of themselves, but they’re a way to continue the franchise. What do you think about that phenomenon or the twisting of the origin story as a genre?

We, in real life, often don’t find out peoples’s origin stories right when we first meet them. It’s not a linear process. You get to know someone at work, as they are, and then as you get closer to them you get to find out their origin story. In that sense, finding out the prequel later mirrors life. There’s a huge commercial element to the whole prequel thing, which is if you’ve got an entertainment vehicle that’s milking a cow, you want to use that cow to give babies and the prequel stories become the calves.

So many movie representations that we see are disappointing because they fall short of our expectations for a character we already feel like we know well. Do you think movies like that can weaken our attachment to the original character?

When you give someone an origin story it makes them human. But for certain characters, that will make them less interesting. The Joker has no origin story, and that’s intentional. There have been versions of his origin story that he has told to people in the comic books... but people know that the Joker lies and nobody believes any of them. He sort of plays on that as a character, about the fact that no one does know his origin. Because it humanizes him. If we knew, we’d understand. We’d understand why he is the way he is. And he wants us not to understand. He likes the fact that we don’t know. He doesn’t want to be humanized. So origin stories have the power to take someone’s power away.