"Crossfire's" swan dive into oblivion: Why it's a good thing that the show was off-air during a summer of huge news

It's a wasted opportunity for CNN, with its random programming strategy that avoids news at all costs 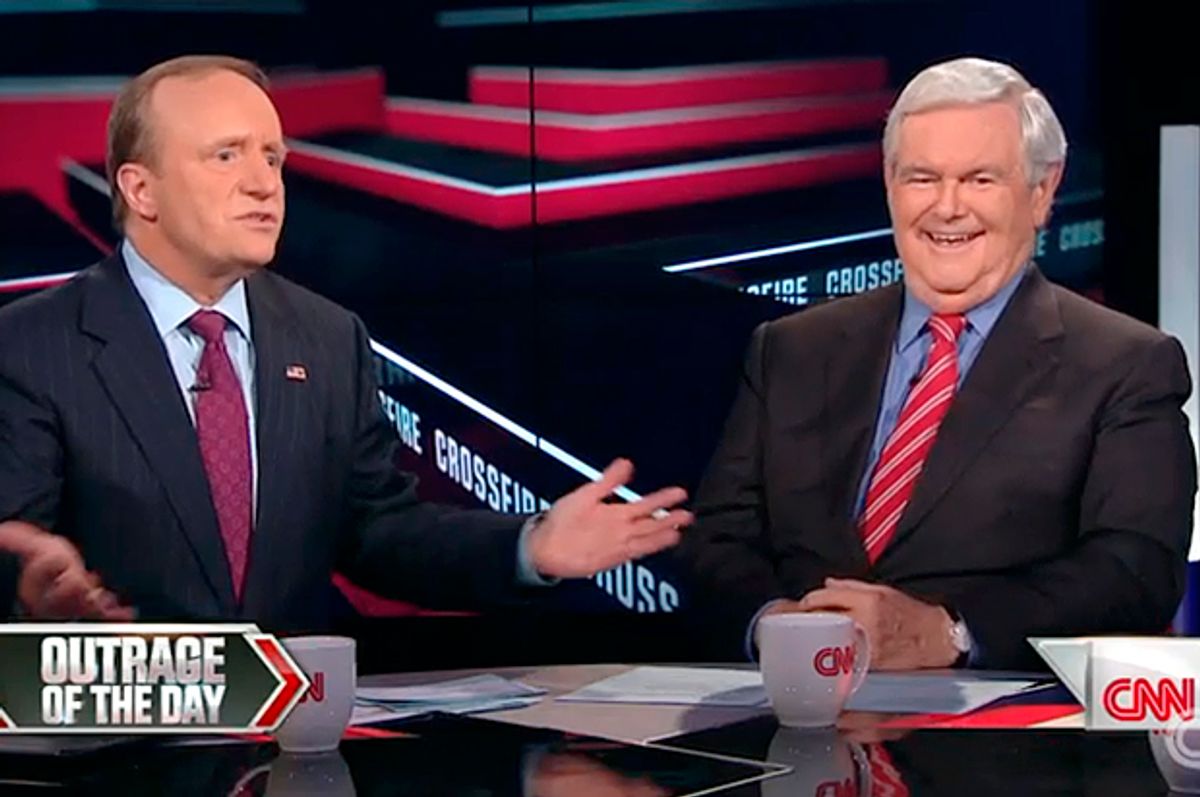 “Crossfire” is no longer, in Jon Stewart’s famous formulation, “hurting America.” It’s not doing much of anything to help, either.

Mediabistro reported that the show has been airing sporadically all year, most recently going on hiatus since mid-July. This is fairly befuddling, given the effort CNN expended in hiring at least one high-profile co-host, in the person of former House speaker Newt Gingrich, and the historic nature of the brand; “Crossfire” had, until its 2005 cancellation, been one of the news network’s iconic brands.

As the show’s been off-air, S.E. Cupp -- the show’s conservative co-host who hasn’t run for president -- has been in demand, appearing on “The View” in what may well be quasi-auditions for a new right-leaning panelist, and writing for the New York Daily News, most recently about how Jennifer Lawrence and other female celebrities ought not to have taken nude pictures of themselves if they didn’t want them leaked.

This is why no one misses “Crossfire” when it’s not on -- because its hosts have nothing to say. A show in which hosts debate the issues of the day from differing perspectives could, if done well, be a hugely valuable asset to a news channel especially in a political landscape wracked by contentious issues (Ferguson, ISIS). That presumes, though, that its hosts would be able to keep their eye on the ball and avoid small-bore polemics, things that Cupp, as evidenced by her Daily News writing, is unable to do.

And it’s something “Crossfire” has proven itself uninterested in doing; at times when serious policy discussion is more needed than ever, the debate show indulged the same prattle as every other talk show. Before “Crossfire” left the air in July, segments included Bill Richardson disclaiming on whether Hillary Clinton or Elizabeth Warren would win in a hypothetical 2016 Democratic primary. Cupp delivered a monologue over cable system customer service. This is neither offensively off-tone in a way that might spark some insight, nor is it -- heaven forbid -- providing any news value or public service. It’s just trending topics presented flatly.

Newt Gingrich, who two years and some months ago was a front-runner for a major party’s presidential nomination, is wasted here; sure, he’s a bit of a clownish figure, but he represents the beliefs of many voters. Pairing him with a fellow conservative who represents a belief solely in cultivating outrage for its own sake, and refusing to allow them airtime when actual news happens, indicates a lack of faith in the concept. “Crossfire,” like so much else on CNN’s completely random schedule -- its documentary series about the 1960s, its Anthony Bourdain series -- reflects an insecurity with the very idea of the news cycle.